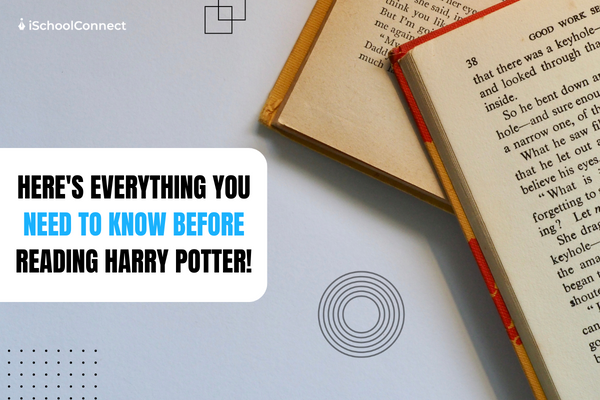 The most popular book series in the world that shaped generations and a massive fandom. Read on this Harry Potter book series review.

Harry Potter is not just a book. It is life for its fans. You must have watched the movie adaptation of this book series. The movies are fascinating to watch and are loaded with a lovely cast. The ‘Potterheads’ still think the Harry Potter book series is better than movies as it has more details.

Born from the mind of the brilliant J.K. Rowling, this series has broken all records. The adaptation of this series into 8 notable films made it even more popular. The book series has a very passionate fandom. You will find many people waiting for their Hogwarts letter and many who love to hate it with all their hearts.

Here’s a brief review of each Harry Potter series book to give you a better idea.

Read more: 10 books that every literature student should read!

Harry Potter and the sorcerer’s stone

After getting rejected from 12 publishing houses, this is the first book from the yet-to-be-famous Harry Potter series. J.K. Rowling struggled a lot to publish this first book. Bloomsbury publications finally saw its worth and published the book in 1997 in the United Kingdom.

It is a fascinating story of an 11-year-old boy, Harry Potter, who lives with his aunt in awful conditions. He receives a mysterious letter from a school of witchcraft. The story goes through his experience at school with his new friends and magic.

This book will intrigue your imagination. It’s a good read for school students, but the child in you will also enjoy it.

Harry Potter and the chamber of secrets

The second book of the Harry Potter series was published in 1998 by Bloomsbury. This book covers Harry’s second year at Hogwarts school of witchcraft. The book triggered some religious debates then, but it didn’t affect its success.

In the books, Harry’s expecting this year to be a typical, happy school year. It starts with his best friend Ron stealing his father’s flying car to reach school. That was a bit scary for Harry, but he’s hoping for the best. He meets his other best friend, Hermione, who’s an absolute genius.

The opening of the chamber of secrets reveals some facts about Harry’s life. The story follows the death of muggle-born children, which becomes a threat to Hermione. It also has an exciting part of Tom Riddle’s diary which takes Harry into the incident 50 years ago.

This book will leave you hanging with many questions and hungry for the next book.

Harry Potter and the Prisoner of Azkaban

The third edition of this series moves ahead of the title ‘children’s book.’ This book was published in 1999. It has a dark and intense storyline. If you have read the book as a child and reread it in adulthood, you will have a different experience.

Harry is in his third year at Hogwarts. A dangerous prisoner from the prison of Azkaban has fled to kill him. Dementors guard this prison. They suck the life out of the human body. When asked about her visualization, J.K Rowling said that she portrayed the dementors as depression.

The book has a fascinating twist at the end. You must read the book to feel goosebumps throughout your body.

Harry Potter and the goblet of fire

The fourth edition was published in the year 2000. It covers the sweet time of Harry, Ron, and Hermione’s life. The danger remains as ‘the one who must not be named’ returns with a human body. Voldemort’s appearance turns the sweetness of teenage years into their darkest phase.

Hogwarts is hosting a Triwizard tournament with two other schools of magic. Students above 18 put their names into the goblet of fire. Somehow, Harry’s name turns out to be in it even when he’s only 14.

This book is the actual start of the battle between Harry and Voldemort. Their encounter with each other is dramatic and sends chills down your spine.

Harry Potter and the order of the phoenix

This book was published in 2003. It includes some of the best dialogues. You can feel the power of Rowling’s storytelling throughout the book. She has written the interactions between Harry and Dumbledore beautifully.

Harry is in his teenage years now. He is experiencing all the confusing emotions of a teenager. Along with them, he’s facing a life threat from Voldemort. No one’s ready to believe him that Voldemort has returned. He starts to train his fellow students to face danger.

This book reveals more details about Harry’s parents and his connection with Voldemort. It also deepens the relationship between Harry and his friends. It’s an engaging book to read. Once you pick it up, you won’t be able to put it down.

Harry Potter and the half blood prince

People went crazy for this sixth edition of this series as it left them hanging at the end of the fifth book. The book was published in 2005 and sold almost 9 million copies in 24 hours worldwide.

Harry is dealing with his fears. He finds a book of potions with the name half blood prince. It intrigues him. On the other hand, Voldemort is growing stronger with his army of death eaters who have entered Hogwarts. Dumbledore has to prepare Harry for the future battle by dwelling on the past.

This book has a dark and chilling feel, yet it is worth reading. It has twists and turns that will keep you on edge. You will have more questions by the end of this book.

Harry Potter and the deathly hallows

The answers to these questions are in this final edition of the Harry Potter series. This book was published in 2007. It was named the ‘best book for young adults.’

Hogwarts has changed by death eaters’ invasion. Harry has to leave his school and go on a mysterious and dangerous journey to find the Horcruxes. It is the only way to defeat lord Voldemort. Ron and Hermione help him on this quest, where interesting details reveal Harry’s life and connection with Voldemort.

The book will take you deep down into darkness. It has some beautiful incidents that objectify the challenges in life. Even though this book will complete the journey of life for Harry Potter, you will be hungry for more adventurous tales from Hogwarts.

We hope you find this article interesting. Write us your comments. Click here to read more such articles.

Liked this blog? Read next: Here are the 10 best books to read about life

Q1. What is the central theme of the Harry Potter book series?

Answer: J.K. Rowling, the author of this series, once said that the central theme of this book is death.

Q2. Who is the most famous character from this series?

Answer: Hermione Granger is one of the most popular characters, except for Harry Potter.

Q3. What is the name of the Harry Potter fandom?