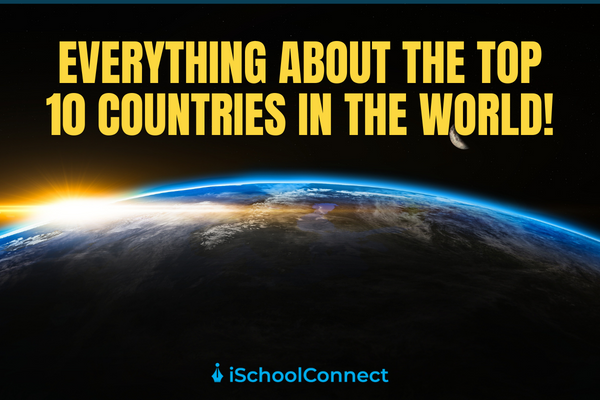 Top 10 richest countries in the world

The richest countries in the world are no longer as shocking as they were two decades ago. They are  regarded as global financial hubs and draw plenty of businesses due to their low tax rates.

Top 10 richest countries in the world

The secret to total happiness, according to many who say they have found it, has nothing to do with money. You have probably heard the adage “Money cannot buy happiness” at least once. Unquestionably, this is true, but there is also a compelling argument that, on occasion, money can offer financial security that makes you feel happy overall. Continue reading to know the top 10 richest countries in the world.

What is Gross Domestic Product (GDP)?

It is feasible to rank countries according to their level of wealth and then compare them to one another by looking at the gross domestic product (GDP) per capita of each nation on the planet. But keep in mind that a country’s GDP per capita may not correspond to the typical income of its citizens. For instance, the United States had a GDP per capita of $65,279.50 in 2019, yet its median wage was just $34,248.45 and its average yearly wage was only $51,916.27. Even the richest nations have some citizens who live in poverty, and even the poorest nations have many people who are quite wealthy, yet it is a reliable indication of a nation’s overall financial health

The Top 10 Richest Countries in the  World(by GDP per Capita, current prices US$ – World Bank)

International business practices occasionally skew GDP values. For instance, several nations (such as Ireland, Liechtenstein, and Switzerland) are known as “tax havens” due to fiscal policies that favor multinational corporations. For many nations, a sizable portion of the GDP may not genuinely be domestic income but rather money that is being funneled through the country by foreign corporations.

Many economists also monitor each nation’s Gross National Income, or GNI, in an effort to offset the impact of these tax havens on national GDPs. This statistic measures the entire worth of all the goods and services produced in a country, similar to GDP, except it also adds or subtracts

The top 10 richest nations in the world according to GNI per capita, Atlas Method, and current US dollars, according to the World Bank

As interesting and perhaps motivating as it is to look over the list of the richest nations in the world, it is as valuable to look at the information when it is split down by continent. According to GDP per capita, the top six nations on each of the six inhabited continents would, for instance, be listed as follows:

Q1. Which is the poorest country in the world?

Answer: Burundi has been ranked as the  poorest country in the world.

Q2. Which country is devoid of any army?

Answer: Andorra does not have any standing army.

Q3. Which is the smallest country in the world?

Answer: Vatican City is the smallest country in the world.