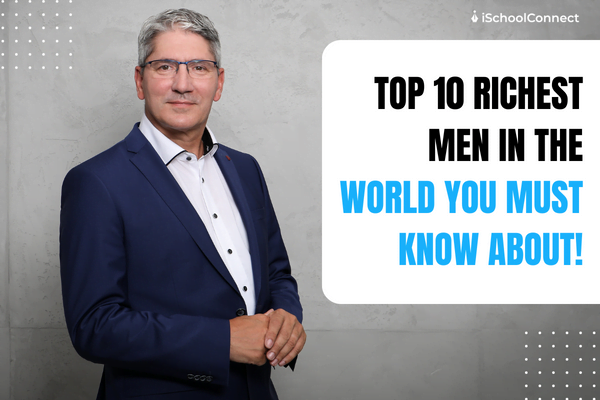 Top 10 richest men in the world

Some billionaires are known to be technology giants with significant company investments. Your innovative work decides where you stand. Read on to know about the top 10 richest men in the world.

The list of the world’s wealthiest individuals can change yearly, depending on their most recent net worth and financial performance. Some of these individuals have come a long way. Persistence and patience are the keys to success. You must follow your heart but give your brain the decision-making power. Let us see what the top 10 richest men in the world have accomplished so far.

Top 10 richest men in the world

Below is the list of the world’s wealthiest personalities. Take a look-

Musk became a significant investor in Tesla Motors (now Tesla) in 2004, which led to his current position as CEO of the electric vehicle company.

In addition to electric vehicles, Tesla manufactures energy storage devices, automobile accessories, and solar power systems through its acquisition of SolarCity in 2016.

Tesla shares increased by 740% in 2020, propelling Musk to the top of the wealth rankings. Tesla will become the largest company to join the S&P 500 in December 2020. Musk became the world’s richest person in January 2021, a position he has held ever since.

Gautam Adani, the promoter of the Adani Group, has divided his multibillion-dollar business fortune into energy, logistics, agriculture, aerospace, and other sectors. Adani is the wealthiest man in Asia, thanks to his Adani Group, a multinational conglomerate that deals with port operations and development in India.

France Chairman and CEO Bernard Arnault is the world’s third wealthiest person. His net worth is $139 billion due to his business empire, which includes more than 70 brands such as Louis Vuitton and Sephora. Bernard Arnault, a French businessman and Europe’s richest man, acquired a $100 billion fortune in December last year.

In 2019, Bezos owned up to 16% of Amazon before transferring 4% to former wife MacKenzie Scott as part of the divorce proceedings. Amazon’s stock price increased 76% in 2020 due to increased demand for online shopping during the COVID-19 pandemic. Bezos left his position as executive chair of the massive e-commerce company on July 5, 2021.

Bill Gates is the co-founder of the Bill & Melinda Gates Foundation and has a net worth of $105 billion. After co-founding Microsoft with Paul Allen, Bill Gates sold off much of his stake in the company, keeping only 1% of the stock and investing the rest in stocks and other assets. Bill Gates joined the $100 billion club last April when Microsoft’s share price soared. The Bill and Melinda Gates Foundation is the largest private charitable foundation in the world.

Larry Ellison has a net worth of $98.3 billion, which he earned from Oracle, the software company he co-founded in 1977. He stepped down as CEO of the company in 2014 and now serves as chairman of the board and chief technology advisor. Ellison has also served on Tesla’s board since December 2018, after purchasing 3 million shares earlier that year. He owns nearly the entire Hawaiian island of Lanai.

Ellison’s charitable contributions have primarily benefited medical research. In 2016, he donated $200 million to the University of Southern California to establish a new cancer research center.

Warren Buffet, also known as the Oracle of Omaha, is widely regarded as one of the most successful investors. He is the CEO of Berkshire Hathaway, which owns over 60 companies, including the well-known Geico insurance, Duracell, and Dairy Queen Restaurant. His net worth is $96.5 billion. He purchased his first stock at the age of 11 as the son of a US congressman.

Reliance Industries founder and chairman have interests in petrochemicals, oil and gas, retail, and telecommunications. Reliance’s 2016 launch of 4G phone services in the Indian telecom market sparked a price war, causing strong whirls and forcing several networks out of business.

Co-founder and Board Member- Alphabet (GOOG)

Larry Page, the co-founder of Google, has a net worth of $89 billion and ranks ninth among the world’s wealthiest people. He has also invested in Planetary Resources, the well-known space exploration company, and ‘Flying Car’ startup companies Kitty Hawk and Opener.

Co-founder and Board Member- Alphabet (GOOG)

Sergey Brin, co-founder and board member of Alphabet, has a net worth of $85.4 billion, placing him tenth among the world’s wealthiest people. In 1998, he co-founded Google with Larry Page, which went public in 2004 and was renamed Alphabet in 2015.

Did you find this blog informative? If so, please share your thoughts in the comments below. Click here to contact us for more information on the top 10 richest men in the world. We would be happy to assist you with your queries.

Liked this blog? Read next: Top 10 richest actors in the world 2022

Q1. Who is the younger female billionaire?

Answer- According to Forbes 2022, Rihanna is the youngest self-made billionaire in America. Her current net worth is 1.4 billion dollars.

Q2. There are how many billionaires in the world?

Q3. Who is the richest actor in the world?

Answer- Jerry Seinfeld has a net worth of $1 billion, making him the world’s richest actor.