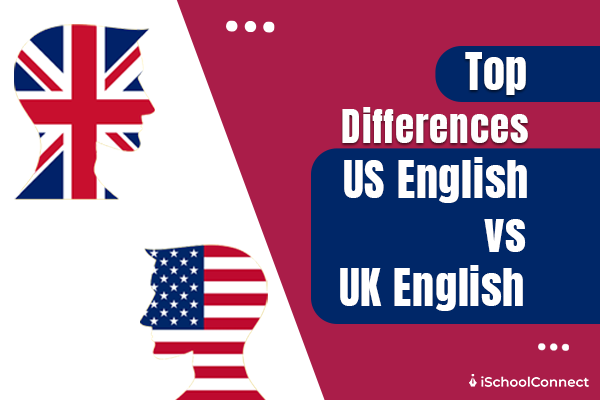 US English vs UK English | Top Differences to Understand!

Research estimates that approximately 1.35 billion people worldwide speak English as a second language or natively in 2021!

Of the different countries that contribute to the global English-speaking population, the two biggest language players in the world are the United States and the United Kingdom. While the language may be the same, there are some key differences between UK English vs US English.

The United States does not have any recognized official language, but English (particularly American English) is used for official pronouncements, regulations, and legislation.

The United Kingdom, on the other hand, has a list of official native languages that is not limited to British English. These include Scots, Gaelic, and Wales!

Learning about the unique linguistic differences between UK and US English can help you hone excellent communication skills!

Keep reading to discover the key differences between UK English vs US English!

UK English vs US English –The History

UK English – Have you done your homework?

US English – Did you do your homework yet?

UK English – She has had lunch.

US English – She already had lunch.

Use of Collective Nouns

Here are some examples-

US English – My team is winning the competition.

UK English – My family are visiting from Canada.

US English – My family is visiting from Canada.

The Use of ‘Shall’

Here are some examples:

UK English – Shall we try doing that again?

US English – Should we try doing that again?

UK English – Shall I roll down the window?

US English – Can I roll down the window?

UK English – Shall we meet at the restaurant at 6?

US English – Do you want to meet at the restaurant at 6?

We hope you found this blog informative. Don’t forget to comment below and share your thoughts! You can also get in touch with us if you have any doubts.

Liked this blog? Read: 60 new words in English with meanings!

Q1. Who created the dictionary standardizing spelling in the United Kingdom?

Answer – Samuel Johnson (in addition to six other helpers) created one of the most famous dictionaries in the world. Named ‘A Dictionary of the English Language’, this was the first published text to standardize spellings in UK English.

Q2. What is the reference of ‘biscuits’ to as in US English?

Answer – ‘Biscuits’ is a word in UK English. It’s US English counterpart is ‘cookies’.

Q3. What is rhotic speech?

Tags :
UK English vs US English.
WRITTEN BY