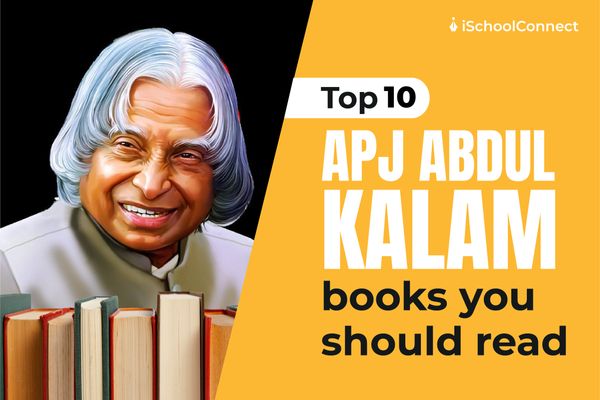 10 essential APJ Abdul Kalam books to add to your bookshelf

The “Missile Man” of India, Dr. APJ Abdul Kalam, endowed us with his many gifts as a scientist in the field of aerospace engineering. In addition to that, he also served as the 11th President of India. Here is a list of 10 essential APJ Abdul Kalam books you need to read!

The 11th President of India, Dr. A.P.J Abdul Kalam, was born in Rameswaram, Tamil Nadu, on the 15th of October 1931. He believed in the idea of India as a nation that would be self-sufficient to protect itself and hence contributed significantly to making a nuclear-armed country. Dr. Kalam was also the recipient of some of the most prestigious civilian awards, including the Padma Bhushan (1981), the Padma Vibhushan (1990), and the highest civilian award – the Bharat Ratna (1997). However, after all his feats, he continued to emphasize the role of education and knowledge. Here is a compiled list of 10 APJ Abdul Kalam books, a few of which he has co-written with other trusted individuals.

This book is the autobiography of Dr. Kalam which co-wrote with Arun Tiwari, an Indian missile scientist who was also a professor and a published author. It chronicles the early life of Dr. Kalam and the series of events inclusive of struggles that led to his choice of career, his work for all of those years at NASA, apart from other facilities and his origin story of becoming the Missile Man of India. Potentially one of the best APJ Abdul Kalam books, it has been translated into 13 languages.

2. Turning Points: A Journey Through Challenges by A.P.J Abdul Kalam

A sequel to Wings of Fire, Turning Points is a continuation of the former President’s life story which details his career and presidency that were not public knowledge prior to the publishing of this memoir. He makes known, his side of things regarding certain points of the controversy.

3. My Journey: Transforming Dreams into Actions by A.P.J Abdul Kalam

Another one of deeply personal APJ Abdul Kalam books, My Journey is the story of the former President’s life that lays emphasis on the people who made the deepest impact on him. It includes some key incidents that occurred in his youth which helped bring him on the trajectory he took later on in life. The book contains deeply personal anecdotes that are rich with nostalgia centered on memories of those closest to him, his father, mother, sister and his mentor, to name a few.

The book was co-written by Dr Kalam and Yagnaswami Sundara Rajan, a scientist and administrator and Honorary Distinguished Professor in ISRO (Indian Space Research Organisation). It talks about the future Dr Kalam saw for India concerning progress and development.

5. Envisioning an Empowered Nation by A.P.J Abdul Kalam with A Sivathanu Pillai

This book addresses the role of Indians in various professional fields such as education, law, information and communication technology, healthcare, and design. It talks about the importance of technology in terms of overall progress leading to a developed nation.

Dr Kalam served as a visiting professor at various academic and research facilities all across the country post-presidency. In the book, he addresses the youth of India, and it is full of ideas encouraging and supportive of dreams and progress.

Some of the books written by Dr A.P.J Abdul Kalam were published during his tenure as President until 2007. Indomitable Spirit is one among other APJ Abdul Kalam books that comprised a collection of various speeches, public addresses and surveys made by him during his presidency.

This book is a collection of narrations, moments from his youth, adulthood and career in the form of poems penned by the former President himself and biographical notes that are paired with beautiful visuals created by well-known artists.

In Transcendence, Dr Kalam and Arun Tiwari talk about a relationship between science and spirituality that is reflected by the friendship the former President shared with Pramukh Swamiji. They address the state of Indian technology, politics, and world affairs, all of which are interlaced with his deep connection to Swamiji.

Voluntarily responding to emails may seem like an alien concept but Dr Kalam received about 300 emails regularly. He set aside a couple of hours daily to go through and answer them. Dr Kalam’s answers to the questions were based on the insight he gained from his life experiences and his interactions with other political and spiritual figures.

There you have it, the 10 most essential books for your bookshelf.

Answer – Yes, his books are translated into various languages, apart from English and Tamil.

Q3. Which is the most popular book of A.P.J Abdul Kalam?

Answer – Arguably, Wings of Fire: An Autobiography wins the popular vote although a lot of his books appeal to different people.