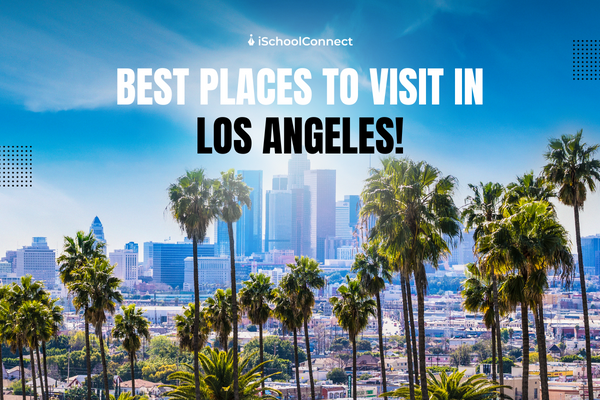 A melting pot of cultures, people, cuisines, and experiences, LA is one of the best cities to visit. It is the home of Hollywood, iconic theme parks, and world-renowned landmarks. Plan your visit in advance with a list of the best places to visit in Los Angeles!

Places to visit in LA that are worth your time

There are several things to do in Los Angeles, but unless you live here,  you won’t be able to do them all. If you’re visiting Los Angeles for the first time, and you’re looking for a guide that will provide you some insight into the greatest places to see during your visit, here is a list of the top attractions. So let’s get this party going!

What are some interesting places to visit in Los Angeles?

This list includes some of Los Angeles’ most famous areas, such as Beverly Hills, West Hollywood, and Malibu. It will also take you to some of the city’s most iconic attractions, such as the Hollywood Walk of Fame, the Chinese Theater, and the Griffith Observatory. It will also provide you a rundown of the greatest theme parks in Los Angeles if you are traveling with children (or are still a child at heart!).

Griffith Observatory is located on Mount Hollywood’s south face and overlooks the Los Angeles basin. Its location provides tourists with breathtaking views of the surrounding countryside, which many praise. But this is more than just a lovely photo opportunity. The observatory contains a world-class planetarium and unique exhibitions.

The Getty Center is one of the most magnificent architectural feats in the United States, and it houses some of the world’s finest works of art. The circular concrete-and-steel tower is created by renowned architect Richard Meier, and it houses a diverse collection of art from numerous eras and countries. Renaissance paintings, 20th-century American photography, Baroque sculptures, antique manuscripts, and more may be found on this huge, modern campus nestled in the Santa Monica Mountains. On clear days, the museum also provides breathtaking sights of Los Angeles.

It is located just west of downtown Los Angeles, is one of the most legendary beaches in the United States. Santa Monica also has a plethora of good dining and nightlife options. The fine sands, perfect weather, and variety of attractions make the three miles of shoreline among the best in the vicinity. The popular television series “Baywatch” was filmed at “State Beach,” which enjoys over 200 days of sunshine every year.

Places in LA to enjoy with children

Los Angeles is home to a plethora of amusement parks, which serve as some of the city’s most popular attractions.Though these parks are enjoyable for people of all ages to visit, the joy of taking your kid on their first ride is incomparable.

The park is in Studio City, about 11 miles from downtown Los Angeles. It includes a variety of exciting rides that are suitable for both adults and children. However, don’t anticipate any tall rollercoasters here. Of course, there are rollercoasters, but they are rides full of excitement and adventure. Universal Studios is primarily focused on rides with storylines, stunts, and special effects, which are quite engaging.

The Disneyland theme park is without a doubt the most popular destination in Los Angeles for families with children. This is a must-see attraction for everyone visiting Los Angeles. Disneyland is more than simply rides and entertainment; it is a destination that will bring back memories of your favorite childhood characters. Mickey Mouse and his pals, the Lion King, Alice in Wonderland, Beauty and the Beast, Cinderella, and The Little Mermaid are all present, ready to enchant parkgoers with the magical world of Disney.

Aquarium of the Pacific

The Aquarium of the Pacific occupies a 5-acre property near Long Beach’s Rainbow Harbor. The aquarium, which houses over 500 marine species, is one of the most instructive attractions in Los Angeles. This is a fantastic attraction for individuals of all ages, but especially for children who can interact with touch pools and sensory exhibits. There are delicate sea horses, playful penguins, otters, and carnivorous reef sharks to be found here. Genuine marine biologists are available to answer inquiries.

Cool places to visit in LA

Make the most of a fun solo-trip or enjoy LA with your friends by going to these fun places to visit in Los Angeles. They are perfect for the ones looking for some gram-worthy adventures.

The Hollywood Walk of Fame is a globally renowned Hollywood landmark. It consists of about 2,600 five-pointed stars made of terrazzo and brass that are inlaid on the sidewalks of Hollywood Boulevard. The stars, which are awarded for achievements in the entertainment sector, bear the names of well-known musicians, actresses, filmmakers, and producers. What began as a Chamber of Commerce marketing strategy is now one of Los Angeles’ most important magnets. Every year, an estimated 10 million people visit.

The famed Sunset Strip is located in West Hollywood, one of Los Angeles’ oldest and most attractive areas. West Hollywood was a key gathering spot for the unusual culture in the 1960s and 1970s, with hippies, musicians, and artists crowding the streets. With its boutique hotels, celebrity-owned eateries, and active nightlife, West Hollywood is now the hottest destination for the entertainment business. There is something for everyone, from exclusive and trendy clubs to low-key informal bars, gay clubs, and old-school rock’n roll hangouts. Because young actors tend to live here, this is the most probable location to spot celebrities on the street.

Rodeo Drive is a three-block-long high-end shopping district located between Wilshire Boulevard and Santa Monica Boulevard. The street itself, Rodeo Drive, is about 2 miles long. Many people expect to see celebrities here, most carrying large shopping bags. However, you will most likely encounter more visitors than natives here, so don’t get your expectations up. Rodeo Drive, on the other hand, is a highly posh neighborhood consisting of luxury stores, beautiful boutiques, and high-end restaurants that will make you feel like a celebrity.

The historic Broadway Theater District in Downtown Los Angeles runs along South Broadway between 3rd and 9th Streets. A tour of the Theater District is the finest way to see these ancient structures. Walking into these theaters is like seeing through a window into the golden age of the entertainment business.

From the Walt Disney Concert hall to the public library, there are so many more places to visit in LA that will steal your heart. Los Angeles is one of the world’s most fascinating cities, so no matter what you do, you’ll have a fantastic time. Because there is so much to see and do in Los Angeles, you should plan on staying at least 3-4 days. Have a fantastic trip!

Did you find this blog informative? Please let us know your thoughts and views in the comments below. Click here to contact us for more information on such trending courses. We would be happy to assist you with your queries.

Likes this blog? Read next: Top 7 places to visit in Japan

Answer- According to the Numbeo.com Cost of Living Index by City, Los Angeles rated 59th among the most expensive places in the world to live in early 2022. Los Angeles was placed 16th out of 95 U.S. cities in their poll. If you are only coming to visit, you should budget roughly $203 per day for your holiday in Los Angeles, which is the average daily price based on other travelers’ spending. Previous visitors spent an average of $46 on meals for one day and $33 on local transportation. In addition, the average hotel room in Los Angeles costs $222 for a couple.

Q2. Where can one experience nature in LA?

Answer- From Joshua Tree National Park, Big Bear Lake to Laguna Beach and Red Rock Canyon State Park, Southern California is full of beautiful nature destinations with many in and around Los Angeles. Making it convenient to find that mental break you need when you need it. Calming destinations are just a car drive away from LA.

Q3. Where to spot celebrities in LA?

Answer- The west end of West Hollywood may be the most concentrated area for celebrity dining in all of Los Angeles, with spots like Craig’s, Catch, and Olivetta all within walking distance.