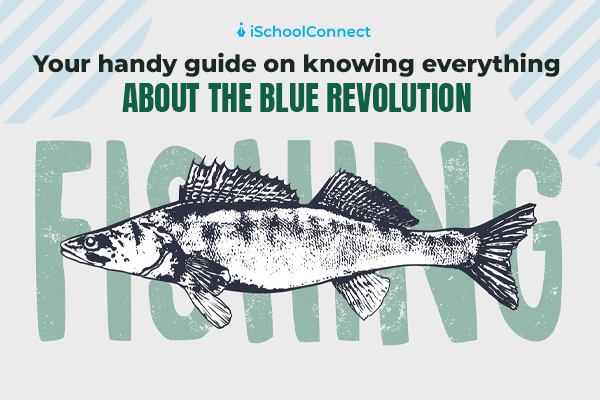 Blue revolution: All you need to know

The Blue Revolution, also known as the Neel or Nili Kranti Mission in India, was launched during the 7th Five-Year Plan in 1985-1990. The primary goal is to develop, manage, and promote fisheries to double farmers’ income.

The Blue Revolution, also known as the Neel Kranti Mission, is a political movement in India that aims to achieve economic prosperity for the country and its fishers and farmers. It contributes to food and nutritional security by utilizing water resources to their full potential for sustainable fisheries development while considering bio-security and environmental concerns.

The Blue Revolution: An overview

The Blue Revolution (Nili Kranti) is a government initiative to expand the aquaculture industry. It began in China and now accounts for roughly two-thirds of total aquaculture manufacturing worldwide.

Recently, the aquaculture industry has been expanding rapidly, with India being one of the fastest-growing countries. The Neel Kranti Mission launched India’s Blue Revolution intending to achieve economic prosperity while considering sustainability, bio-security, and environmental concerns.

The Blue Revolution in India began during the 7th Five Year Plan (1985-1990), with the Central Government of India sponsoring the Fish Farmers Development Agency (FFDA). Later, at the time of the 8th Five Year Plan (1992-97). The Central Government of India launched the Intensive Marine Fisheries Program, and they eventually established fishing harbors in Vishakhapatnam, Kochi, Tuticorin, Porbandar, and Port Blair.

The Ministry of Agriculture and Farmers Welfare, in collaboration with the Departments of Animal Husbandry, Dairy, and Fisheries, planned to restructure this scheme and the other ongoing schemes under the ‘Blue Revolution.’ The National Fisheries Development Board was responsible for developing and managing fisheries under this scheme (NFDB).

The Blue Revolution Schemes include the following components:

The scheme’s objectives are as follows

1. To tap India’s total fish potential on land and sea and triple production by 2020.

2. Using new technologies and processes to transform the fisheries sector into a modern industry.

The salient feature of the blue revolution

The Blue Revolution initiative focuses primarily on increasing the production and productivity of aquaculture and fisheries from both inland and marine sources.

They are promoting and encouraging economically disadvantaged groups, such as Scheduled Castes, Scheduled Tribes, Women, and their cooperatives, to take up fishing.

The Blue Revolution Scheme promoted the growth of entrepreneurship.

Monitoring, Control, and Surveillance (MCS) and other need-based

The three broad categories of financial support extended were:

The Blue Revolution initiatives of the Department of Fisheries and the NFDB have resulted in the development of the fisheries sector in terms of fish production, post-harvest infrastructure, marketing, and so on.

The economic condition of India through the augmentation of fisheries thus contributes to food and nutritional security. The Neel Kranti Mission sustainably utilized water resources for the development of fishing.

For developing pisciculture Under, Inland Fisheries & Aquaculture has been designed.

NFDB has directly extended some need-based activities mandated under the Blue Revolution scheme, with a particular emphasis on increasing productivity, livelihood generation, and developing better post-harvest and marketing infrastructure, as well as other need-based interventions.

Liked this blog? Read next: Everything you must know about the father of the green revolution!

Answer: Nili Kranti, or the Blue Revolution, refers to the period of rapid growth in the global aquaculture business from the mid-1960s until the present. The aquaculture business has been developing at a 9% annual rate, with India being one of the fastest-growing countries.

Answer: Hiralal Chaudhuri and Dr. Arun Krishnsnan are known as the “Father of the Blue Revolution.” The Blue Revolution in India began during the 7th Five Year Plan (1985-1990), with the Central Government of India sponsoring the Fish Farmers Development Agency (FFDA).

Q3. What are the long-term consequences of the blue revolution?

Answer: The surge in the production of carnivorous fish (which accounts for all of the luxury fish raised) and shrimp has translated into higher demand for fishmeal, which must get supplied from wild fisheries, which is perhaps the most ubiquitous effect of the Blue Revolution. Fishmeal accounts for one-third of all fish catch worldwide. The surge in shrimp production, in particular, has introduced new fisheries to tropical areas where they were previously unknown.

Admin iSchoolConnect
Study Abroad Expert
`
How to write a postcard? | Here are easy steps What you need to know about studying in Dublin