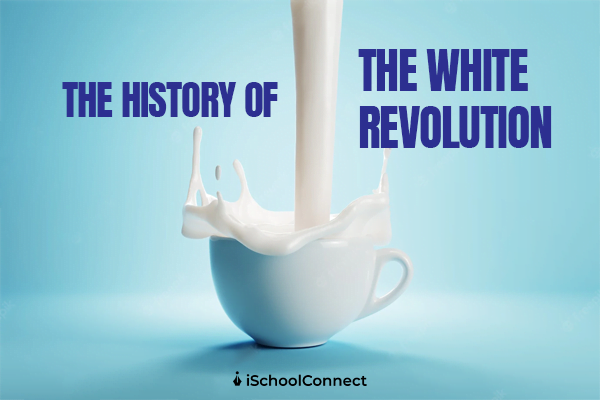 In 1970, the Indian government launched one of its most extensive dairy development campaigns in India with the White Revolution. It was the brainchild of Dr. Verghese Kurien, an agricultural scientist from India who transformed the country’s society and economy.

What is the white revolution?

The White Revolution, also known as Operation Flood, was India’s nationwide dairy development program. It began in 1970 by Verghese Kurien, an agricultural scientist. The main objective of this revolution was to increase the availability of milk at low prices and improve the quality of life for small farmers who depended on agriculture for their livelihoods. This revolution improved rural infrastructure and created jobs for millions of unskilled workers who had previously been unemployed.n

Two national organizations, NDDB (National Dairy Development Board) and Amul (from Anand in Gujarat), came together to carry out these objectives. Together they established several cooperatives throughout India that would buy fresh milk from local farmers at fair prices while providing them with access to new equipment and technology that would raise production levels without excessive capital investment.

History of the white revolution

The White Revolution in India was under the leadership of the country’s prime minister at the time, Indira Gandhi. The main motive behind it is to make India self-sufficient in milk production and improve the quality of life of people.

On 2nd October 1970, Mrs. Gandhi inaugurated White Revolution at Motihari in Bihar. One hundred cows were imported from New Zealand to low-income families to have a steady milk supply at a reasonable price and improve their nutritional status.

Dr. Verghese Kurien is known as the father of the White Revolution. He was born on 28th March 1921 in Kozhencherry, Kerala, to a family of farmers.

Dr. Kurien was the founder and chairman of the National Dairy Development Board (NDDB). He served as its chairman from 1965 to 2008 and as executive chairman from 2009 until his death in 2012.

In 1965, Dr. Kurien established Amul Cooperative Union Limited, which has grown into a Rs 50,000 crore brand with over 12 million milk producers across Gujarat. These milk producers supply milk through their local unions daily under the Amul brand name to markets all over India and overseas countries like the USA and European nations, where there is a huge demand for dairy products made from Indian cows’ milk.

Features & objectives of the white revolution in India

The primary objective of the White Revolution was a movement that was to increase the production of milk in India. The primary goal of this program was to increase access to milk because, at the time, it was one of the Indians’ primary protein sources.

The objectives of the White Revolution in India were

Phases of the white revolution in India?

Phase 1: The goal of this phase, which began in July 1970, was to establish dairy cooperatives in 18 milk sheds across 10 states. They were to connect to the top four metropolitan areas. Thirteen thousand village dairy cooperatives were serving 15,000 farmers by the time this phase ended in 1981.

Phase 2: It aimed to expand on phase 1’s designs and the assisted dairy development programs in Madhya Pradesh, Rajasthan, and Karnataka. There were 136 milk sheds, 34,500 village dairy cooperatives, and more than 36 lakh members by the time this phase ended in 1985.

Phase 3: The focus of this phase was to build on the successes of the first two phases by enhancing the dairy industry’s productivity and efficiency for long-term sustainability. There were 73,300 dairy cooperatives and over 9.4 million farmer members when it came to an end in 1996.

The white revolution was a change in the way farmers were producing milk. The dairy industry needed to grow more prominent, requiring more cows, which meant farmers would have to invest more money into their land, animals, and equipment. Because of the cooperative model, they could pool their resources to purchase better and more advanced technology than they might have been able to individually.

It also made it easier for them to find markets for their products since they could sell directly through cooperatives rather than through mediators who might take advantage of them or leave them with less profit margin.

Likd this blog? Read next: Food and nutrition course | Everything you need to know

Q1. What is the Grey Revolution?

Q2. How successful was Operation Flood?

Q3. Was the White revolution only about milk production?

Answer – Milk production was only one aspect of the White Revolution. The operation’s foundation was the pursuit of excellence in farmers’ work. It concerned high-quality cattle feed, breeding milch cattle that produced more milk, artificial insemination to ensure breed improvement, and better milk packaging to ensure longer shelf life.

Admin iSchoolConnect
Study Abroad Expert
`
Everything you must know about the father of the green revolution! The difference between fashion technology and fashion designing