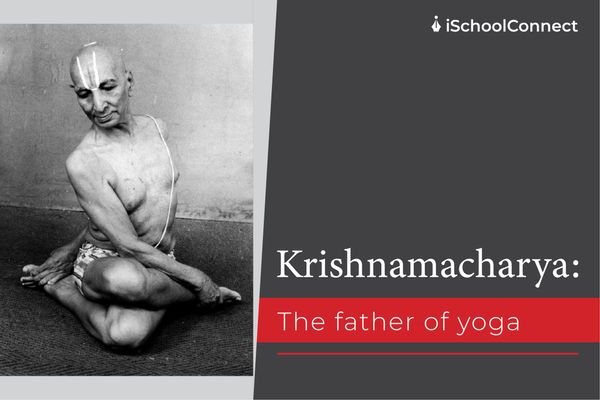 The Father of Yoga: Tirumalai Krishnamacharya

Yoga is a practice that boosts physical, mental and spiritual discipline. It helps you with self-realisation and helps develop harmony between the mind and the body. Tirumalai Krishnamacharya is known as the father of modern yoga and was a significant influence on the development of postural yoga.

The word ‘yoga’ comes from the word ‘yuj’ which means ‘ to bind’. There is scientific evidence that yoga is beneficial to our overall well-being. Yoga has evolved a lot over the years. In recent days, when people suffer from several health issues because of a stressful lifestyle, yoga is an effective way to combat the stress and be in tune with ourselves. Tirumalai Krishnamacharya, the father of yoga, refined yoga postures and made meditation an integral part of the practice. He said that “Yoga was India’s greatest gift to the world”. His teachings reflect that yoga is both a spiritual practice and a mode of physical healing. His style of yoga focuses on asanas for improved physical postures, pranayama, for breath regulation and dhyana which is meditation.

Here is all you need to know about the father of modern yoga, Tirumalai Krishnamacharya.

Tirumalai Krishnamacharya was born on November 18, 1888, in Mysore. He was named Krishna by his parents and the suffix ‘Acharya’ was added to his name after he became a great teacher. He thoroughly studied the scriptures, followed the teachings of the Vedas and his gurus as well as taught others.

Tirumalai Krishnamacharya, in his youth, travelled through India thoroughly studying the six darźanas. In 1906, he attended the Royal College of Mysore which he left to move to Benaras. There he spent time studying Sanskrit, logic and grammar as well as Mimasa. Krishnamacharya, also received thorough teachings into the Vedanta philosophy under Sri Krishna Brahmatantra Swami when he was back in Mysore. He secured degrees in all the six darźanas or Indian philosophies. In 1914, he attended classes at Queens College where he gained a number of teaching certificates. After this, he left to study at Patna University and received a scholarship to study Ayurveda. He also went to the Himalayas and learnt yoga under Yogi Ramamohana Brahmachari.

Krishnamacharya, while under the patronage of the King of Mysore, travelled across India to give lectures and demonstrations and promote yoga in the country. He laid emphasis on asana and pranayama. Tirumalai Krishnamacharya, the father of yoga is the architect of vinyāsa. Vinyāsa means combining breathing with movement and this style of yoga came to be known as Viniyoga or Vinyasa Krama Yoga. Krishnamacharya’s instruction followed one underlying principle which was ‘teaching what is appropriate for the individual’. He also established a yoga shala in Mysore. According to him, a healthy body is free of illness, which will ensure the mind is free of worries.

Krishnamacharya was a world-renowned yogi, however, he was also a healer who used the principles of both yoga and Ayurveda to help the well-being of people. He also wrote four books on yoga – Yoga Makaranda (1934), Yogaasanagalu (c. 1941), Yoga Rahasya, and Yogavalli (Chapter 1 – 1988). Moreover, he also composed poems, hymns and commentaries in Sanskrit. Among his important works is the Yoga Valli, and the Dhyanamalika, which is a composition on the practice of dhyana.

Krishnamacharya also earned degrees in philosophy, divinity, philology and music and was a highly regarded scholar. He was offered the position of Acharya at the Srivaishnava sampradaya twice, which he declined.

Interesting facts about the father of yoga:

Viniyoga, which comes from the word vinyāsa, teaches movement in connection with your breath. This style of yoga helps create inner awareness and helps you feel how your body responds to the movements. It also helps improve your core stability.

This is a yoga method, which helps you explore the potentials of the body. When you practice this form of yoga, you achieve mental peace and ultimate spiritual freedom.

Power yoga is a fitness-based and vigorous yoga style. It can also be accompanied by minimal meditation and chanting.

Yoga benefits people of all ages. Yoga lets you reconnect with your inner self.  Here are a few benefits of inculcating the practice of Yoga in students:

Tirumalai Krishnamacharya single-handedly popularised Yoga in India and left behind a legacy for future generations. His students include some of the most renowned and influential teachers, such as Indira Devi, B.K.S. Iyenger, etc. For Krishnamacharya, the path of yoga meant different things for different people and that each person must be taught in a way that resonated with them. In other words, he regarded yoga as an incredibly personal experience and practice.

Q1. What is the importance of yoga?

Answer – The art of practising yoga allows you to be in tune with your mind, body and soul. It makes you calm, helps manage stress and anxiety. Modern yoga incorporates meditation and breathing, which helps students improve concentration.

Q2. Which is the ideal time for practising yoga?

Answer – The ideal time to practice yoga is early morning.

Q3. Do I need rest days from yoga?

Answer – Rest days are extremely important when you practice yoga daily. They allow your body and mind to rest and renew.

Feel free to check out our blog for more such posts!

Tags :
father of yoga
WRITTEN BY