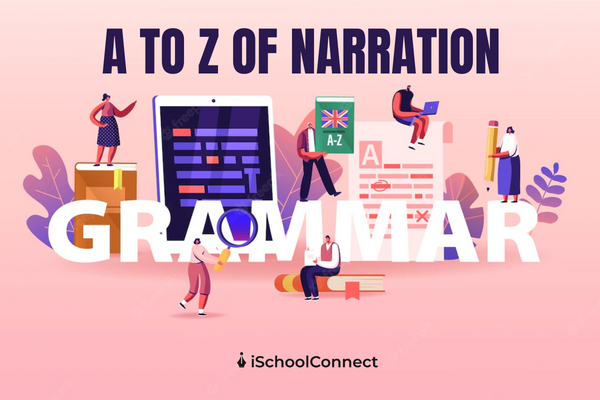 What is ‘narration’ in English grammar?

Narration is the art of reporting a speaker’s words. There are two main ways to report a speech. One is direct speech; the other is indirect speech. Keep reading to learn more about the narration in English grammar.

Narration can be defined broadly as the system of reporting the words of a specific person in a new sentence. It includes sentences that contain the speech of someone who once spoke. It may appear confusing, but narration is a fundamental concept in English grammar. Narration is divided into two categories-direct speech and indirect speech, which help narrate words differently. Various concepts in English help us express our thoughts and ideas differently. Narration in English grammar is a concept related to expressing a person’s speech or words discussed in this blog.

Narration refers to any type of explanation or telling of something. It is commonly used in the context of storytelling. You might have heard narration if you’ve watched a television show in which one of the characters speaks directly to the audience. Narration is frequently found in songs where the singer tells the story of how something happened, such as when he lost his guitar, truck, and wife and began singing the blues. The same concept is used for narration in English grammar.

A person’s speech or words can be expressed in two ways. This distinguishes between direct and indirect speech in narration. In grammar, there are two types of speech.

In other words, we express a speech in direct speech as if the original speaker is speaking for himself. There is no change in the words or the tenses of the verbs. In this case, we use a reporting clause or verb to indicate that we are referring to someone else’s speech or words, such as he said, she said, and so on. Then comes the reported clause, which is the speaker’s original speech.

In a nutshell, this is the method of narrating someone else’s words in a sentence by using quotation marks or inverted commas and making no changes to the original words.

We can see the sentences contain speech marks that contain a specific set of words. These sentences are referred to as direct speech.

Read more: Things you should enlighten yourself about Functional Grammar

This is a speech or system of narrating a person’s speech in which we are not required to use the exact same words as the speaker. Indirect speech is the sentence in which we convey or narrate a speech by rephrasing it in our own words.

No quotation marks are used in indirect speech to quote the speaker’s words. Only the speech’s most important or necessary parts are reproduced here using different words. The only goal is to convey the same message.

We use a reporting clause similar to a direct speech here, followed by a reported clause. The ‘that’ clause is the most common way to express words in indirect speech. However, depending on the circumstances, the reported clause may change. If it’s a question, for example, use ‘if’ or ‘whether.’ ‘To’ is a command that can be used.

Conversion from direct to indirect speech

If we need to convert a direct speech sentence to an indirect one, we must follow some general rules listed below.

The pronoun is the first thing we need to think about. The speaker’s pronoun must be changed to convert a speech into indirect speech. It depends on whether someone is referring to themselves or a third party.

The tense is the second most important thing to consider. The simple rule is that when we switch from direct to indirect speech, the verb’s present tense changes to past tense. However, if the reporting clause is in the present or future tense, the reported clause’s tense will not change.

The third point is about the language we use.

Modal verbs such as shall, will, and so on in direct speech will change to would, should.

Similarly, in indirect speech, adverbs of time, place, and demonstratives such as that, this, and so on will change.

So, these are the fundamentals we must cover regarding narration. Narration is simply the expression of someone’s speech in two ways: direct and indirect.

Did you find this blog informative? If so, please share your thoughts in the comments section below. Click here to contact us for more information on narration in English grammar. We would be happy to assist you with your queries.

Liked this blog? Read next: Famous quotes and thoughts in English

Q1. What is the purpose of narration?

Ans- Narration is the art of telling stories, and narrative writing aims to tell stories. You are engaging in narration when you tell a friend or family member about an event or incident from your day. A narrative can also be either true or false.

Q2. Which tense is used in narration?

Ans- Narrative tenses are verb tenses used to discuss the past.

They are frequently found in stories, textbooks, oral accounts, and historical descriptions. Here are some examples of narrative tenses-

‘We left for the airport on a beautiful day.’

Q3. Are narration and speech the same?

Ans- The way the speaker phrases the sentences differs according to the narration chart or ways of speaking. It can be spoken directly, hence known as direct speech, or indirectly, which is known as indirect speech or reported speech.