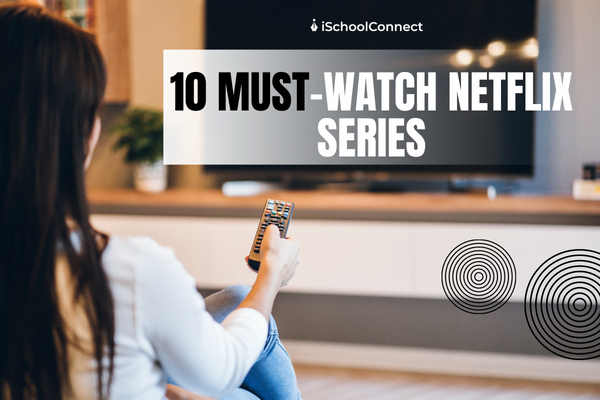 Don’t miss this list of the top 10 Netflix series you must watch!

Netflix has brought several good shows as its original production. Where to start? Don’t worry! We got you. Read on the top 10 Netflix series to watch now.

Netflix is our go-to platform for movies, web series, anime, and comedy specials. It also has numerous documentaries to watch in all genres. In this article, we will explore the top 10 netflix series.

The web series mentioned below include all genres. They are listed by their rank mentioned on the IMDB website and their popularity. Choose any one of these series as per your mood. Just sit back and chill with Netflix.

The winner of 16 prime-time Emmy awards, this series will blow your minds. Breaking bad broke the OTT platforms with its brilliant storyline, characters, and amazing seasons. It has five seasons that went through the guidance of multiple visionary directors.

Breaking bad is a story of a chemistry teacher diagnosed with cancer. He has loads of medical debts. He decides to enter the meth-making business to save his family from this burden. How does this decision turn out? Watch online to know more.

It is a crime, period drama set after World War 1. It has five seasons to keep you on the edge of your seat. The series went through the vision of 6 directors changing each season. It was released in September of 2013 with a loaded cast.

The series revolves around the Irish crime family, the Shelby’s. Peaky Blinder is a group that infiltrates rich societies. The lead character, Tom Shelby, played by Cillian Murphy, is the leader of this group. If you are looking for an edgy crime drama, then this is the one.

A mysterious drama with a supernatural touch. Dark has three seasons. It is a German series with the vision of director Baran Do Odar. It was released in December 2017 and instantly gained popularity among the global audience.

Dark is a story of a family set in a small German town. It revolves around the much-explored topic of time travel but in a very interesting way. The lead character, Jonas Kahnwald, played by Luise Hofmann, tries to unfold the mystery of time and entangled relationships. You will not be able to predict the ending.

It is filled with drama and mystery. Black Mirror has an interesting sci-fi story in each episode. It was released in December 2011. It has five seasons with thriller episodes loaded with drama. It is an anthology directed by several talented visioners.

This anthology explores the idea of high-tech machines invading human life. It revolves around the good and bad effects of having technology for literally everything. The ideas in this series will blow your mind and also scare you a little bit.

If you want to watch a British teen drama to laugh and learn, this is the right pick. Sex Education was released in January 2019. It has three seasons and is still being produced. It is directed by Gillian Anderson, Rosie Jones, and Ben Taylor.

Sex Education, as the name suggests, is about sex education. The lead character, Otis Milburn, played by Asa Butterfield, is a high school student who becomes the sex therapist for students. Through this storyline, the series beautifully covers different aspects of sex, sexuality, and how we should deal with it.

A British biographical drama with a rich history of the royal family of Great Britain. The series was released in November 2016. It has four seasons and is still being produced. Peter Morgan created this Golden Globe winner series.

The Crown revolves around the late Queen Elizabeth 2nd’s life, where she encountered several political rivalries. The details make this series even more dramatic. It has talented actors perfectly cast for the roles. Once you start watching it, you won’t be able to stop.

It is an animated comedy and drama series with conversations that can keep you awake at night. It was released in August 2014 and has six seasons. Raphael Bob-Waksberg created this series.

BoJack Horseman is the lead character of the series. He is a washed-up television star of the sitcom in the 80s. Now, his life is filled with depression, addiction, and relationships. The series will give you a perfect dose of dark comedy.

Another dark-comedy series with a subtle screenplay that will make you laugh in tears. It was released in March 2019. Ricky Gervais wrote and presented the series beautifully. It has three seasons, perfect to binge-watch.

After Life is a story of Tony Johnson, played by Ricky Gervais, coping with his wife’s death. The series deals with the concept of darkness and depression in a funny but practical way. By the end of the series, you will fall in love with the characters and the dog.

It is a comedy, romance-drama series that takes place in the fashion capital of the world, France. The series was released in October 2020 and has two seasons. It was created by Dareen Star and loaded with a talented cast.

Emily in Paris is a story of a young American girl who gets hired by a marketing firm in Paris. She encounters many interesting characters and serves the best fashion goals. It is quirky, funny, romantic, and glamorous.

In the world of the mighty Japanese Anime, this stood strong for years. It has 21 seasons with more than 900 episodes. It is filled with action, adventure, and comedy.

One Piece is not a Netflix original series but occupies the most views on it. It is a story of a young boy Monkey D. Luffy who desires to become the king of pirates. He takes his crew on an adventurous journey to find the hidden treasure. If you are not a hard-core anime fan, then you will be by the end of this series.

The list of best Netflix shows is incomplete without these mentions. We can’t leave them behind. So, let’s take a brief look at them.

We hope you found the list interesting. Write to us your comments. Click here to read more such articles.

Liked this blog? Read next:  Electrochemical series | Applications, benefits, and tricks to remember!

Q1. Which is the top web series on Netflix currently?

Answer: The Walking dead is the top series on Netflix currently.

Q2. Which is the most viewed movie on Netflix?

Q3. Which is the top reality show on Netflix?

Answer: The Great British Baking Show is the top reality show on Netflix.