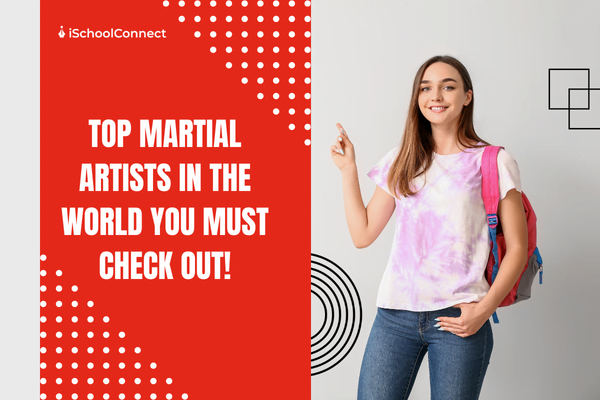 Top 10 martial artists in the world

Martial arts help you become more active, learn self-defense, and guide you on the path of discipline. Here are the top 10 martial arts artists in the world. Read on to learn more.

Martial arts is one of the fighting sports that people frequently participate in for various reasons, including self-defense, fitness, as a hobby or pastime, or to boost self-confidence. Some popular self-defense techniques are Kalaripayattu, Judo, Karate, Kung Fu, Taekwondo, Muay Thai, and Wushu. If you’re looking for motivation, here are the top 10 martial artists in the world.

One can find the earliest evidence of martial arts in depictions of fights in figurative art, early literature, and analyses of early archaeological finds and weaponry. Some of the oldest artwork depicts battle scenes dating back to 3000BCE.

Many people regard Asia as the center of the martial arts world because many of the most well-known martial arts, such as Kung Fu, karate, and Hwa Rang Do, originated in the region.

Martial arts have been shaped over time by various factors ranging from ancient myths and legends to historical upheavals. Different cultures have developed fighting styles to survive since the beginning of time, but Chinese martial arts have endured and flourished in many countries.

Below are some of the best martial arts artists. Take a look at them and find some inspiration through their work.

Commentators, critics, the media, and other martial artists regard Lee as the most famous martial artist of all time and a popular culture icon of the twentieth century who bridged the East-West divide.

Jackie Chan ranks second on the list. He is skilled in Wushu and Hapkido and has appeared in more than 150 films since the 1960s.

He has received numerous honors and accolades, including induction into the Hollywood Walk of Fame and the Hong Kong Avenue of Stars.

Li, who has appeared in films such as The Expendables and Once Upon a Time in China, began his career as a skilled Wushu fighter.

After three years of training, he won his first national championship for the Beijing Wushu Team. President Richard Nixon once asked him to be his personal bodyguard.

He retired from competitive Wushu at 18 due to an injury but remained an assistant coach for the Beijing Wushu Team.

Yen, a Hong Kong heartthrob and multi-talented mixed martial artist is best known for his 2008 instant classic Ip Man, a biopic of Bruce Lee’s master. It popularised Wing Chun, the snake-meets-crane close-up combat style of deflections, blocks, and short-arm blows. All the more impressive given that Yen learned the technique in just nine months.

Many of his students went on to teach others, extending master Yip’s influence in China and beyond.

Norris, best known for his films from the 1980s and 1990s, was initially trained in Tang Soo Do, achieving a black belt in that discipline, as well as tae kwon do, Brazilian jiu-jitsu, and judo.

He even developed his fighting style, Chun Kuk Do. From 1964 until his retirement in 1974, he had a stellar karate tournament career, becoming world champion in 1968 and amassing an estimated record of 183-10-2.

The heir to Bruce Lee’s throne foregoes wires and stunt doubles, resulting in bruising ultra-realism in his fight scenes. Jaa grew up in rural Thailand, watching martial arts movies and practicing in his father’s rice paddy before mastering taekwondo, Muay Thai, aikido, Krabi krabong, judo, and jiu-jitsu. Ong-star Bak is also a gymnast, swordsman, and high-jumper who can still clear two meters. Jaa’s style is acrobatic, lightning-quick, fluid, and breathtaking. He’s shorter than Lee at 5ft 6in, but he punches just as hard.

Van Damme is a well-known movie star, director, and dedicated MMA fighter. His father enrolled him in a Shtkan Karate school when he was ten.

His styles include Shtkan Karate and kickboxing. He earned a black belt in karate and began lifting weights, eventually becoming Mr. Belgium’s bodyweight. He’s Asiadabbled in karate, kickboxing, and ballet.

Number nine on the list is Steven Seagal. He started his adult life as a martial arts instructor and currently holds a 7th-dan black belt in aikido. He was the first foreigner to open an aikido school in Japan. His career then shifted to primarily direct-to-video films.

Did you find this blog informative? If so, please share your thoughts in the comments below. Click here to contact us for more information on the top 10 martial arts artists in the world. We would be happy to assist you with your queries.

Q1. Which martial arts is tough to learn?

Answer- Brazilian Jiu Jitsu is widely regarded as the most challenging martial art to master. Even for the most athletic students, learning this discipline will be difficult.

Answer- Kung fu as a martial art can be traced back to the Zhou dynasty (1111-255 bc) and even earlier. The Daoists used it as an exercise in the 5th-century bc.

Q3. Which martial arts is the quickest to learn?

Answer- Muay Thai (kickboxing) is one of the simplest martial arts to learn and a great place to start for beginners. Muay Thai emphasizes the clinch technique, which is also helpful in judo and wrestling.