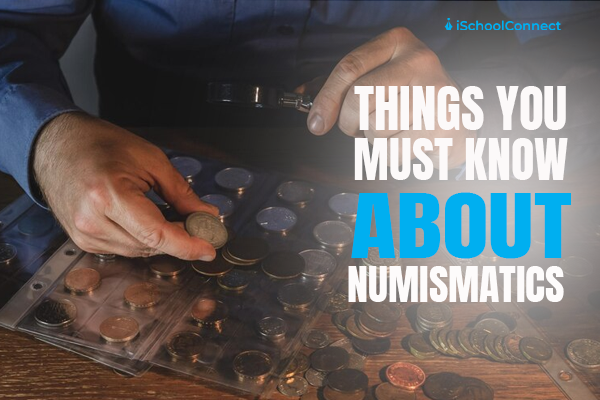 The study of coins, often known as numismatics, provides historians and archaeologists with a wealth of valuable information. For an archaeologist, the discovery of a coin is comparable to making a fortune. For one straightforward reason: it enables them to obtain information about the area they are excavating in much more quickly

The history of business, economics, social organization, mythology, philosophy, personalities, military leadership, and key historical events can all benefit from the wealth of information obtained from coins. Coins are a rich source of data. Learn more about numismatics

Coins, stamps, and other things with a monetary value have been studied for centuries, and this field is called numismatics. The term can also describe investigating various monetary systems and debt settlement practices.

Physical qualities of the artifacts, such as their appearance, year of production, metallurgy, place of manufacture, and political, economic, and historical milieu during the time of production are the focus of the investigation.

Coin collection dates back to the ancient world when emperors like Caesar Augustus were in power. It is said that Augustus gathered a vast collection of foreign coins from all over the world and used them as diplomatic presents to strike trade deals with other kings.

Petrarch’s letters show that he was pursued by vine diggers who wanted to sell him their coins and identify the kings depicted on them, hence he is considered the first Renaissance collector. The Pope, Henry IV of France, and Maximilian I of the Holy Roman Empire were all avid collectors of coins. It explains why collecting coins was once considered a royal pastime.

To better document coins from their respective regions, coin collectors began to form professional societies in the 19th century. Researching the manufacture and circulation of coins, medals, and currencies from the 17th century onward is a big part of modern numismatics. Researchers are also curious about the social, cultural, and economic significance of coin minting, its variants, mintage records, mint-made inaccuracies, and other intricacies.

The internet and other forms of modern communication have facilitated the study of coins by making it simpler to learn about coin history and to share that knowledge with other scholars. Researchers and collectors of coins worldwide have banded together to form national coin communities and societies where they can discuss and compare coins from all over the world.

Thanks to the internet, numismatists now easily access a wealth of information on coinage’s historical development.

India was one of the first countries to mint coins, and the Indian currency is famous for its wide variety of designs, sizes, weights, and materials. From its foundation, India’s coinage has been vital to the country’s economic growth and prosperity.

From the earliest of times, Indian coinage has featured designs, symbols, and stamps that reveal a great deal about the dynasties that issued it. Many such ancient Indian coins have been thoroughly examined by numerous archaeologists and travelers.

Liked this blog? Read next: Top 10 oldest languages in the world-a list you must know!

Q1. Should you clean your coins?

Ans- The simple response is “NO!” Coin cleaning is a mystery that many people have to solve. Cleaning a coin that has been in circulation and is worn will change its appearance. What you’d end up with is a shiny but well-used currency. In most cases, cleaning a coin reduces its worth.

Q2. How to make sure your numismatic item is authentic or not?

Ans-The market is flooded with replicas of rare coins that are offered as “tributes.” These replicas of rare coins were not made with dishonest intentions but rather to facilitate their acquisition. Most of these fake currency items feature the labels “Copy” or “Replica” inscribed on them, usually in small font sizes. Forged currency, such as counterfeit banknotes, can be difficult to spot. Take the item to a professional for verification.

Q3. I want to sell my coin collection. What do I do?

Ans-A lack of awareness about the coin market might make trying to sell them a very frustrating affair. Before putting coins up for sale, it’s a good idea to get a rough idea of what they’re worth. You can sell your numismatics at a number of different places. You can sell them to a dealer, list them online, or arrange for an auction house to buy them from you.