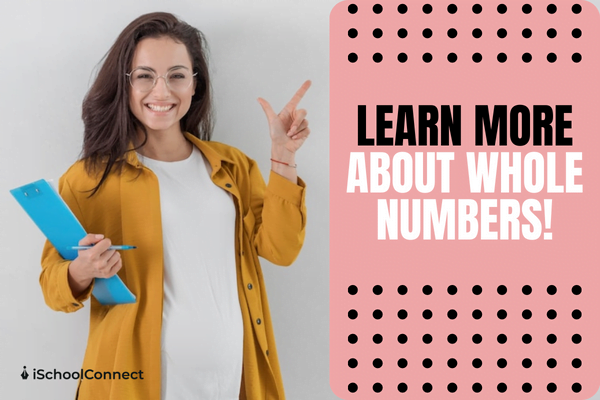 What is a whole number? | Definition, symbols, and example

Whole numbers are a subset of the number system that includes all positive integers ranging from 0 to infinity. One can find these numbers on the number line. Read on to know what is a whole number.

Math requires the ability to define whole numbers and distinguish them from natural numbers. Whole numbers such as 0, 1, and 2 are the foundation for understanding more complex number identifiers such as real, rational, and irrational numbers. Rounding to the closest digit can help you perform calculations or mental math faster. Keep reading to learn what is a whole number, its definition, and its symbol.

What is a whole number?

The group of natural numbers that includes 0 is known as whole numbers.

Here are some facts to help you understand them better-

Let us examine the differences-

Whole numbers on the number line

The four basic operations on whole numbers (addition, subtraction, multiplication, and division) result in four major properties of whole numbers. They are as follows-

Read more: B.Sc in Mathematics – all details about the course.

The sum of two whole digits is the same according to the commutative property of addition. In other words, the order of addition is irrelevant.

According to the addition commutative property-

The distributive property states that when a number is multiplied and distributed in any order, the value of the result remains the same.

As a result, proved.

Did you find this blog informative? If so, do express your thoughts in the comments below. Click here to contact us for more information on what is a whole number. We would be happy to assist you with your queries.

Q1. Who is the father of math?

Answer- Archimedes, the great Greek mathematician and philosopher is the father of Mathematics.

Q2. Which is the greatest whole number?

Answer- Because whole numbers range from 0 to infinity, the greatest whole number is infinity.

Answer- Real numbers can be positive or negative, and they include the number zero. They are called real numbers because they do not belong to the imaginary number system.