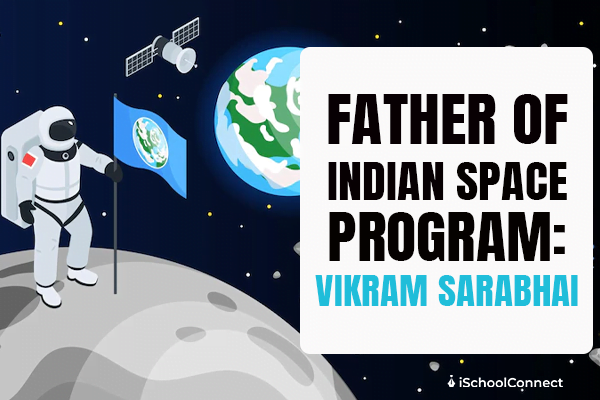 Vikram Sarabhai, the father of the Indian space program, has put India on the international map in space research. Without Sarabhai’s vision and groundbreaking contribution, India would not have reached such heights in space science.

Dr. Vikram Ambalal Sarabhai, a famous Indian space researcher, astronomer, and physicist, is a jewel in Indian history. His advanced skills, intellect, and foresight have enabled India to land in space literally. He set the pace for space exploration in India. As a result, he is known as the ‘father of the Indian space program.’

Vikram Ambalal Sarabhai attended a private school in Ahmedabad for his early education. The love of science began to bloom in the school itself.

He later graduated from Gujarat College and moved to England. England was deemed a science hub at the time. In 1940, he received his Tripos degree in Natural Science from Cambridge University.

Later, during World War II, Vikram Sarabhai returned to India and joined the Indian Institute of Science. He studied Cosmic Rays under the supervision of the great scientist of the time, C.V. Raman. In 1947, he returned to Cambridge University and received his Doctorate.

The Career of the father of the Indian space program

Sarabhai returned to the newly independent India in 1947 after receiving his Doctorate. He established the Physical Research Laboratory in Ahmedabad to improve scientific facilities. He had envisioned and established several science-based research centers across the country. The Indian Institute of Management Ahmedabad (IIMA) came into existence in 1961.

In 1962, Vikram Sarabhai founded the Center of Environmental Planning and Technology (CEPT University) in Ahmedabad. Undergraduate and postgraduate degrees in Arts and Science are available at the institute.

In 1965, he established the Nehru Foundation for Development to support social and developmental causes in society (NFD). He also built the Vikram A Sarabhai Community Science Center (VASCSC) to pique the public’s interest in science and mathematics.

The Indian government agreed to the space program, and Dr. Sarabhai received the backing of Dr. Homi Bhabha, known as the ‘Father of Nuclear Science.’ He assisted Dr. Sarabhai set up the country’s first rocket launch facility at Thumba, near Thiruvananthapuram, beside St. Mary Magdalene Church. They chose this location because it lies along the Earth’s magnetic equator. The first flight, with a sodium vapor payload, launched on November 21, 1963.

Dr. Sarabhai began work on a project that would result in the creation of India’s first artificial satellite orbiting the Earth. Aryabhata was launched four years after Dr. Sarabhai’s death on the Kapustin Yar, a Russian rocket, in the month of July 1976. The name of the satellite is after an Indian mathematician and astronomer.

More than just a scientist

He founded the Operations Research Group, India’s first market research organization, intending to apply modern analytical research to client needs. This was one of the first attempts in India to use analytics in a business setting. To this day, the company conducts studies, surveys, and polls on behalf of its clients.

Dr. Sarabhai recognized the need for a management institution and was instrumental in establishing the second Indian Institute of Management (at the time) in India in Ahmedabad. With the assistance and influence of other Ahmedabad-based industrialists, Sarabhai sowed the seeds of IIM-A and several other institutions over the years, significantly contributing to India’s progress and prosperity.

Co-founder of a dance academy

In 1942, Dr. Sarabhai married Mrinalini Swaminathan, a world-renowned classical dancer. The collaboration of the classical dancer and innovator-scientists led to the foundation of the Darpana Academy of Performing Arts in Ahmedabad. Mallika Sarabhai, their daughter, now runs the school, as she has for the past 30 years.

Dr. Sarabhai died unexpectedly on December 30, 1971, at 52. He died in a hotel room in Kerala the same day he witnessed the launch of a Russian rocket and laid the foundation stone for the Thumba railway station.

Achievements and honors of the father of the Indian space program

Vikram Sarabhai’s contribution to Indian science and research is unparalleled. He had a forward-thinking approach and predicted that science would advance in the near future. He did, in fact, usher India into the so-called Space Age.

Honors bestowed upon the father of the Indian space program include-

The Inventor of the following Indian institutes-

Did you find this blog informative? If so, please share your thoughts in the comments section below. Click here to contact us for more information on the father of the Indian space program. We would be happy to assist you with your queries.

Liked this blog? Read next: Everything you must know about the father of the green revolution!

Q1. What was Sputnik famous for?

Answer- Sputnik 1 successfully launched and entered Earth’s orbit on October 4, 1957. Thus, the space age began. The successful launch stunned the world, establishing the former Soviet Union as the first to launch a man-made object into space.

Q2. Who made the first rocket in the world?

Answer- Dr. Robert H. Goddard was the first to launch the liquid-fueled rocket on March 16, 1926, exactly 75 years ago.

Q3. Who is the current chairman of ISRO?

Answer- On January 14, 2022, Shri S. Somanath took over as Secretary of Space and Chairman of the Space Commission.