>  Blog  >  Motivation   >   6 Indian scientists and their inventions that changed the world! 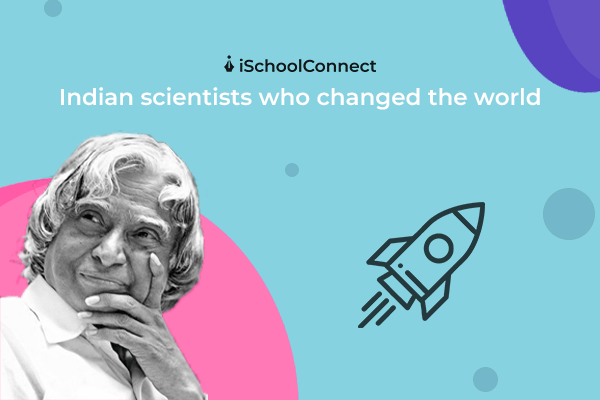 India is a country that has produced several of the most notable names in science and technology.
Learning about these 6 prolific Indian scientists and their inventions can help you appreciate their contributions to humanity.
Read more in this blog!

Several Indian scientists and inventors have established themselves in the lucrative discipline, including personalities such as Salim Ali and CV Raman (whose significant discovery in spectroscopy is celebrated as National Science Day every year).

These scientists have contributed significantly to the different niches within science, including mathematics, biology, chemistry, and physics. Learning everything there is to know about the most reputed Indian scientists and their inventions can help you gather more awareness of their contributions.

Keep reading to learn about 6 such Indian scientists, whose talent and hard work continue to influence the field today!

“For, each man can do best and excel in only that thing of which he is passionately fond, in which he believes, as I do, that he has the ability to do it, that he is born and destined to do it.”
– Homi Jehangir Bhabha

The determination of scientists beautifully highlights in the above quote by the ‘Father of the Indian Nuclear Programme’, Homi J. Bhabha.

Prafulla Chandra Ray was a philanthropist, industrialist, educationist, as well as a curious scientist. He is one of India’s most experienced chemists and academicians.

Prafulla Chandra Ray’s invention is among the list of Indian scientists and their inventions that paved the way for the pharmaceutical industry in India.

He established ‘The Bengal Chemicals & Pharmaceuticals’ as the first pharmaceutical company in India.

He was listed among the honorary doctorates of several different universities and was honored for his contribution to the field by the Corporation of Kolkatta.

Dr. APJ Abdul Kalam is one of the most recognized names on our list of Indian scientists and their inventions. He served as the president of India from 2002 to 2007.

Dr. APJ Abdul Kalam started his career as an aerospace engineer at the Defence Research and Development Organization (DRDO). During his tenure here, he designed several helicopters for the Indian Army. His expertise in atmospheric science aided the Indian Army significantly in their missions.

Soon after, his transfer took place to the Indian Space Research Organisation (ISRO). Under his directorship, ISRO launched the satellite Rohini in near-earth orbit with India’s first Satellite Launch Vehicle in 1980 (the project was named ‘SLV-III’).

Dr. APJ Abudul Kalam also paved the way for the development of nuclear weapons programs and missile production in India.

Ali was a prolific ornithologist and naturalist. He is well-known as the ‘Birdman of India’. His name is added to the list of the best Indian scientists and their inventions because of his significant contributions to our understanding of the bird kingdom.

Salim was the first scientist in India to successfully survey and conduct research on birds. One of his most popular handbooks is ‘Birds of India and Pakistan’ and provides detailed information on a wide range of bird species.

His insights into the bird kingdom have been honored with the Padma Bhushan and Padma Vibhushan awards. Several different bird species and bird sanctuaries have been named after him and his dedication to the subject.

Chandrasekhara Venkata Raman is one of the first Indian scientists and their inventions studied the motion of light.

CV Raman’s initial discoveries were born when he worked with the acoustics of musical instruments. He was also among the first Indian scientists to investigate the harmonic nature of the sound produced by Indian drums (such as the mridangam and the tabla).

One of CV Raman’s most profound contributions was when he discovered that when light travels through a transparent medium, some of the deflected lights change in wavelength.

This phenomenon is now well-known as ‘Raman scattering’, the result of which is the Raman effect.

Radhakrishnan was among the most renowned space scientists in India. He was also a member of the Royal Swedish Academy of Sciences.

He is among the Indian scientists and their inventions that revolutionized the design of sailboats and aircraft. These designs significantly contributed to the development of high-quality and durable Indian vessels.

He also contributed significantly to the study of galaxy structure, interstellar clouds, and celestial bodies. His insights, theories, and investigations propelled India further in the global race for space exploration.

Ammal is among the brilliant women scientists of India who has made a significant contribution to the field of genetics. She was also among the first women Indian scientists whose inventions were honored by the Padma Shri Award in 1977.

Her research was in the field of cytogenetics (a branch of genetics that deals with how chromosomes related to phytogeography and cell behavior). She carried out several experiments on sugarcane and Indian eggplant crops.

She also went on to occupy the distinguished position of director-general on the Botanical Survey of India.

Was this blog informative? If yes, please share your thoughts in the comments below. Click here to reach out to us for more information on Indian scientists and their inventions that changed the world. We would be happy to assist you with your queries!

Q1. Who was the Indian mathematician who discovered ‘zero’?

Answer – The concept of zero and its operation was first defined by the Hindu astronomer and Mathematician Brahmagupta in 628.

Q2. When did APJ Abdul Kalam pass away?

Q3. Which scientist collaborated with Albert Einstein for work in the niche of quantum mechanics?

Answer – Satyendranath Bose was an eminent Indian mathematician and physicist who collaborated with Albert Einstein on the development of the Bose-Einstein statistics.