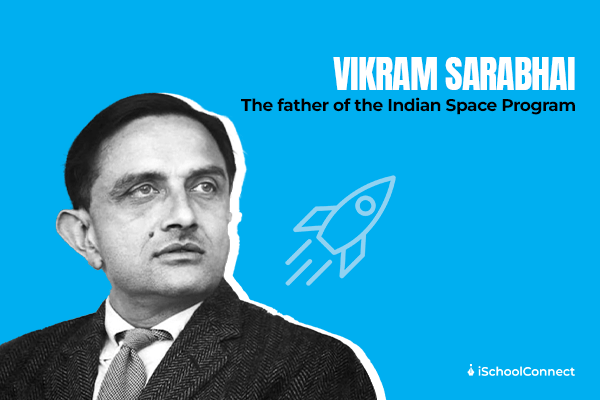 India’s achievements in the field of space science are owed to one extraordinary figure – Vikram Sarabhai.
Also known as the ‘father of the Indian Space Program’, his pioneering work helped the country to achieve its heights in ‌space science.
Here are 5 incredible things to know about this personality!

Born on 12 August 1919, Vikram Sarabhai was an Indian astronomer and physicist whose visions and work initiated space research in India. He also contributed to the development of nuclear power in the country.

His work was honored with the Padma Bhushan award in 1966 and the Padma Vibhushan award in 1972 (awarded posthumously). To date, this prolific personality is well-known as the ‘Father of the Indian Space Program’ across the world.

Keep reading to learn 5 interesting facts about Vikram Sarabhai and his work!

Sarabhai was a man who was much ahead of his time. In his life, he established several institutions. He also built the foundation upon which India now continues to recognize itself as a global space science authority.
Here are some facts worth knowing –

The Sarabhai family was an affluent family in Gujarat and the proud owners of many mills and industries in the state. Ambalal Sarabhai (Vikram’s father) was a leading industrialist who created significant familial wealth during his career.

His children participated in a wide range of industrial and philanthropic activities. A significant amount of the wealth channels back into society to uplift the disadvantaged.

Vikram Sarabhai continued to practice philanthropy much after his childhood, allowing it to become a core facet of his identity today.

In 1947, Vikram Sarabhai founded the Physical Research Laboratory or PRL. PRL was one of Vikram’s biggest achievements with a modest beginning at his home.

The primary project taken up by PRL was the ‘RETREAT’. This project emphasized the study and research of cosmic rays. The project also focused on the properties of the Earth’s upper atmosphere. As the organization grew, research niches extend to include radiophysics and theoretical physical (with grants from the Atomic Energy Commission).

On 11 November 1947, PRL was formally established at the M. G. Science Institute in Ahmedabad with support from the Ahmedabad Education Society and Karmkshetra Education Foundation.

Sarabhai believed that India, too, could be among the space satellite superpowers of the world. His vision and pioneering work allowed the launch of India’s first satellite, Aryabhata.

Aryabhata’s launch from a soviet rocket was by the Indian Space Research Organization. The launch was created out of an agreement between the Soviet Union and India, directed by UR Rao and officially signed in 1972. This agreement allowed the Russian government to use Indian ports for launching vessels and tracking ships. In return, the USSR became a platform for the launching of different Indian satellites.

A patron of the arts

In addition to being a science enthusiast, Vikram Sarabhai also profoundly loved the arts.

He got married to the renowned classical dancer Mrinalini Sarabhai. Together, the couple founded the Darpana Academy of Performing Arts, in honor of a wide range of Indian art forms and styles.

Darpana Academy of Performing Arts was established in 1949 and has been directed by Mallika Sarabhai for the last three decades.

Darpana continues to be at the forefront of the movement, using the arts for social change. Darpana’s puppeteers extended their efforts to work with the central ministry of rural development in villages in India. These students also taught tribal women how to use smokeless stoves.

Vikram Sarabhai was also a pioneer of the Indian pharmaceutical industry

If you think Vikram Sarabhai’s efforts and talents limit to space science, philanthropy, and the arts, think again! He was also a significant contributor to the development of the pharmaceutical industry in India. He was among the few citizens who recognized that this industry needs to be of the highest standards of quality that need to be maintained at all costs.

Vikram Sarabhai was also the first person to implement the Electronic Data Processing and Operations Research Techniques in the pharmaceutical industry.

His consistent efforts and contributions to the field have made India’s pharmaceutical industry self-reliant. The industry also self-manufactures several drugs and equipment all around the world.

Was this blog informative? If yes, please share your thoughts in the comments below. Click here to reach out to us for more information on Vikram Sarabhai. We would be happy to assist you with your queries!

Liked this blog? Read next: Sudha Murthy | Learn about the woman who inspires many!

Q1. When did Vikram Sarabhai die?

Answer – Vikram Sarabhai passed away on 30 December 1971, due to a cardiac arrest.

Q2. Where did Vikram Sarabhai complete his postgraduate studies from?

Answer – Vikram Sarabhai completed his postgraduate studies at Cambridge University, where he obtained a Tripos in Natural Sciences in 1940.

Q3. What was the name of the market research organization set up by Vikram Sarabhai?

Answer – Vikram Sarabhai set up the Operations Research Group (ORG) which was the first market research organization in the country.