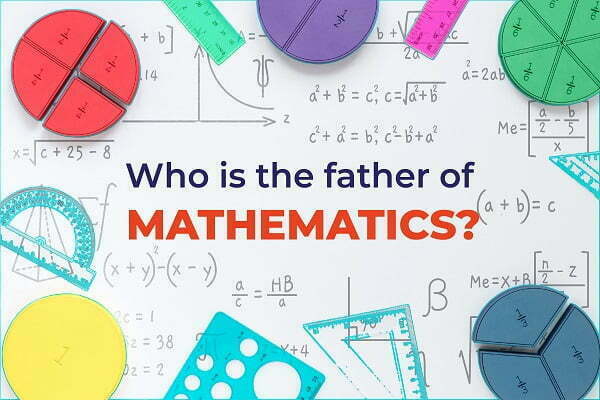 Do you know who the finest mathematician in history was? It was Archimedes. Also known as the father of mathematics, he developed some of the mechanical systems we use today. Read this blog to learn all about this brilliant man!

The life of the father of mathematics- Archimedes

Archimedes was a Greek mathematician who flourished from 287 to 212 B.C. He found mathematical problems very intriguing. So much so that he scribbled math equations and plotted graphs on the ground and even on his stomach. Let’s read more about the man who today is known as the father of mathematics.

He was born in Syracuse, a Greek colony at the time. Phidias, Archimedes’ father, was an astronomer, and he most likely instilled in his son a love for arithmetic and science.

His family also encouraged him to pursue formal education. This was the reason for his enrollment in Egypt’s School of Mathematics. Archimedes spent most of his life in the service of King Hiero II of Syracuse. He helped the king with mathematical problems and devised new strategies for troops.

According to Vitruvius, Archimedes was tasked with verifying whether the goldsmith had used silver instead of gold. When a votive crown for a temple was made for King Hiero II of Syracuse, who had given the pure gold to be used. He couldn’t melt it down into a regular-shaped body to calculate its density. Because he didn’t want to destroy the crown.

A little more about the principle

So one day, while bathing, Archimedes saw that the water level in the tub rose. This is when he recognized that this effect could determine the volume of the crown while bathing.

For practical purposes, water is incompressible. Thus, the buried crown would displace an amount of water equal to its volume. By dividing the crown’s mass by the volume of water displaced, we find the crown’s density. If they introduced less dense metals, the density would be lower than gold.

The tale of the golden crown does not occur in any of Archimedes’ recorded works. The method’s viability is in question for the precision that would be necessary for measuring water displacement. Archimedes may have sought a solution based on the notion known as Archimedes’ principle in hydrostatics. However, he discusses this in his work On Floating Bodies.

His proclivity for solving mathematical difficulties led him to create some of the foundational mathematical principles. As he called it, the “technique of fatigue” was one of his fundamental innovations. Using this method, he could determine the areas of shapes, including circles. He could also quantify the value of pi.

Additionally, Archimedes expanded on the “technique of exhaustion.” It is to measure parabolas and calculate the relationship between spheres and cylinders. Archimedes was one of the first mathematicians to grasp the concept of infinity. Besides, he was also a ‘prime number’ specialist.

Because of the Archimedes screw, many people are familiar with Archimedes’ name. Thanks to this technique, water can now flow upwards! Archimedes’ screw is made of a hollow cylinder and a hollow spiral, which can be inside or outside the cylinder. When the screw is spun, the water goes from a lower to a higher plane.

Archimedes’ screw was first employed to empty the water of a ship. But it now has a variety of modern applications. Farmers in dry places use it to irrigate their crops, and wastewater treatment plants use it to transport water from one location to another.

Read: Father of Genetics | Learn about some great contributions

Death of the father of mathematics- Archimedes

According to the myth, the soldier killed Archimedes because he mistook his instruments for weapons or gold. But other stories claim the soldier became frustrated waiting for Archimedes to solve the issue he was working on.

Legacies in mathematics and science

Sir Isaac Newton and Carl Friedrich Gauss regarded Archimedes as one of history’s most important and influential mathematicians. There are several memorials to Archimedes in the fields of math and science, such as –

We hope you enjoyed this blog about the father of mathematics and found it informative. Don’t forget to comment below and share your thoughts! You can also get in touch with us if you have any doubts.

Q1. What is the modern application of Archimedes’ math?

Answer- People use the Archimedes screw in plastic reforming machines, die casting machines, and injection molding equipment, among other things. The fast-rotating screws that assist in water pumping can also generate power.

Answer- He devised a method for expressing vast amounts of data. Archimedes discovered key theorems about the center of gravity of planar figures and solids in mechanics. Archimedes’ principle, his most famous theorem, determines the weight of a body immersed in a liquid.

Q3. Did Archimedes experiment with light?

Answer- According to myths, Archimedes’ mirrors elevated the warmth of the ships to the point that they caught fire by focusing on the sun’s beams. While a concave mirror in one hand may focus sunlight on lighting a paper in the other, burning a faraway wooden ship would necessitate an impractically enormous mirror.

Tags :
Father of Mathematics
WRITTEN BY