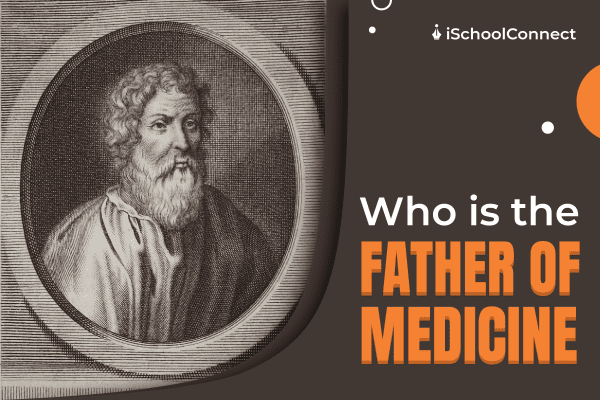 Father of Medicine | The brilliance of Hippocrates in his works

Ancient Greece has produced great minds and nobles, who have been canonical in the development of society. If you were wondering where modern medicine originated, the answer is the Grecian soil! Here we have the father of medicine, who forever changed the human body’s worldview.

Hippocrates of Kos (460 B.C.E. to 370 B.C.E.), the founding father of medicine, was a Greek physician who remains unmatched in the pages of history. His stellar contribution in setting up the Hippocratic School of Medicine revolutionized the status of medicine in Greece and the world at large.

Read on to learn about the life and significant contributions of the father of modern medicine. Also, the motives behind his machinery.

Hippocrates | The father of modern medicine

Soranus, a Greek physician, provided the earliest biography of Hippocrates, which details the life of the renowned physician of the time. The father of medicine was a generational medicine enthusiast who gained much of his knowledge from his father and grandfather; and mingled with people like Democritus and Georgias to study the science further. Hippocrates also received training at the Asklepieion of Kos under the direction of the Thracian physician Herodicus of Selymbria.

Eminent Grecian thinkers like Plato and Aristotle also have made mention of the admired physician and educator. Plato identified Hippocrates as the ‘Asclepiad of Cos’ who taught medicine throughout his life and also attributed a great sense of respect towards the father of modern medicine. He identified Hippocrates as a physician — a professional stature like the noted sculptors Polyclitus and Phidias.

Soranus, a Greek physician, provided the earliest biography of ancient Greek legends like Hippocrates and Plato, who had never recorded their discoveries and theories in a book. Instead, these philosophers had disciples who would note the teachings sacrilegiously and preserve these manuscripts. Due to this evidence, we get a hint of their minds, suggested theories, and so on. The “Hippocratic Corpus” is one such artifact that led medical science to prosper. Historians estimate that it contains around 19 writers with different construction dates and subject matter. The anthology comprises lectures delivered by the father of medicine, his philosophy, research, and medical notes. The book is essential as it provided vital information on unconfirmed theories and probable diagnoses and became a torchbearer for medicine’s rational and scientific practice. Notable pieces of the treatise are “The Hippocratic Oath,” “Aphorisms,” “Instruments of Reduction,” “The Book of Prognostics,” and so on.

Hippocrates vehemently rejected the misconceptions regarding diseases. He believed human beings became ill not because of God’s will or retribution, or even as a byproduct of mystical spirits lurking around in the environment, but due to the imbalance caused in their physical being. His rational mind separated illness from religion, allowing him to inspect the condition and behavior of the human body thoroughly. The father of medicine formulated the Theory of the Four Humors, which was celebrated and later made famous by Plato, Aristotle, and William Shakespeare.

Read: Father of Genetics | Learn about some great contributions!

The Hippocratic theory expounded that human beings suffered from illness when the four humors were imbalanced. The four humors consist of black bile, yellow bile, blood, and phlegm. The four humors are believed to be linked with the earth’s four elements and determine a human’s disposition. As mystic as it may sound today, this necessary deviation ushered in a fresh idea that the human body reacted to environmental factors. Hippocrates asserted that health and illness heavily depend on diet. An unsuitable diet and other environmental factors like season, the position of certain planets, and age could potentially trigger the balance between the humors and produce diseases.
Ancient Greece barred dissecting corpses, limiting the scope of medical advancements and research. So, the father of medicine relied on prognosis rather than a diagnosis to cure his patients. Hippocrates prioritized immobilization and avoided exertion. He would bank on a clean environment, diet, soothing balms, and rarely any potent drugs. The Hippocratic school favored passive treatments and general diagnoses, successfully treating diseases and making room for further clinical studies.

Physicians became more indebted to Hippocrates’s theories, and contributions as technology and science progressed beyond Hellenistic bounds. The advancements in anatomy, physiology, surgery, and pharmacy credit the father of medicine as their origin and inspiration. Galen of Pergamum, who became the chief determiner of medicine in Renaissance Europe, expressed that the father of medicine inspired his knowledge and practice. Hippocrates was the inspiration for many physicians, while Galen provided more nuanced stances.
The relevancy of Galen faded with the dawn of the 19th century, but Hippocrates holds his place to the present day. The Hippocratic Oath remains a mark of ethics and humaneness and is still widely used today.

The legacy of the father of medicine

Hippocrates, regarded as the father of medicine to this day, had a long line of successors who looked up to the man’s brilliance. His methodologies showed a new direction in the history of medical science and remained undeterred for centuries. After Hippocrates’s death, his successors refused further improvements and treated patients based on their master’s theories. Critics have noted that the practice of documenting a patient’s clinical case history faded after Hippocrates.
However, in the middle ages, entire Europe and Arabian lands celebrated the father of medicine for many centuries. The 19th-century European practitioners like Thomas Sydenham, William Osler, William Heberden, and Jean-Mariot Charcot revived the methods of the father of medicine and began elucidating them.

Reach out to us for vivid details of more such personalities.

Liked this Blog? Read Father of Genetics | Learn about some great contributions!

Q1. Who is the father of western medicine?

Answer– Hippocrates is known as the father of western medicine/modern medicine/ancient medicine.

Q2. Who is the father of Ayurveda medicine?

Answer– Charaka, an ancient Indian physician, is widely known as the father of Ayurveda medicine.

Q3. What is the Hippocratic Oath?

Answer– The Hippocratic Oath is the ethical code that medical practitioners take in order to maintain the integrity of human life. The oath is prominently mentioned in the Hippocratic Corpus and has become a testimony of humaneness and moral ethics. Practitioners who swear by the oath are obliged to prescribe beneficial treatments with their best judgment.

Tags :
father of medicineHippocrates
WRITTEN BY

Dhriti Chadha
Study Abroad Expert
`
Thoughts on Education | 7 quotes that will inspire you! 5 motivational success stories of women you need to read