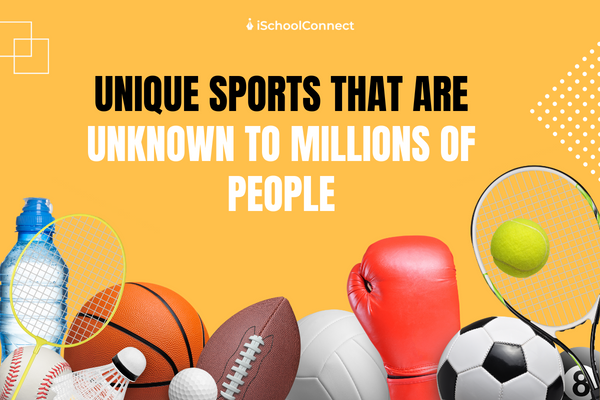 10 Unique sports you didn’t know about

Unique sports have an amazing way of making a positive impact on society. They are favored by people of all age groups too. Keep reading to know more about unique sports you didn’t know and how they are played.

We are all familiar with sports like basketball, football, and baseball. Many others are still less known. Someone had the foresight to devise some of these unique sports, which is why they are widely discussed and are a part of world records too. This blog will discuss some of the unique sports you didn’t know about.

Even though they aren’t as well-known, they are as entertaining to watch and play as the popular ones.

Many of you might have heard of or played ultimate frisbee, but it needs to be included as the first sport on the list because it is sometimes overlooked.

It takes elements of flag football and is played on a  soccer field where quick, athletic players jump and dive for a floating disc.

It’s a lot of fun, so show some sporting spirit while playing it.

Floorball might be the sport for you if you have excellent hand-eye coordination. It is similar to lacrosse and floor hockey with players freestyling and maintaining control of the ball while attempting to score in the opponent’s net.

It was invented in the 1970s and is now so popular that it is vying to become an Olympic sport in 2020.

This may not appear to be so cool at first sight, but it’s a lot more astounding in person.

Some people struggle with the simple act of running, and there are many more who are unable to juggle it, let alone juggle while running. When you combine these, you get this sport that is merely another method for someone to show off their abilities as they race against competitors.

Chess is a game that needs patience, strategy, and skill—but why not have two players hit each other across the face as well?

That is what chess boxing achieves, as it takes the same skill level as the traditional game but adds a physical element that leaves the players black and blue, as participants win by either playing the chess game or knocking their opponent out.

It makes anyone who was a member of the Chess Club in high school look pretty cool.

Though this sport is not for the faint-hearted, still you can try it once as it is played by following all the safety.

If you like the notion of not only rock climbing a steep mountain but also sleeping in a tent,  that’s hanging by an anchor that climbers pounded into the mountain’s side, then this could be the trip for you.

If you like this idea, then be prepared to give it a shot if you could first test it on an indoor rock climbing wall.

Who says we have to wait for nice weather to sail?

If you’ve ever wanted to get out on the lake and catch some rays, ice boating could be your new hobby. It’s the same concept as ordinary sailing—except done on ice.

Sailing can become a perfect pastime with a frozen lake, a boat, and skate-like runners instead of a keel.

Getting down and dirty has hurt no one, so why not play soccer in a massive puddle of mud?

That’s what swamp soccer (or football) does, as players follow the same rules as regular soccer, but without a grassy pitch.

Regular skiing or snowboarding can be thrilling, but do you know what makes it much more thrilling? Going up and down hills with a parachute-like kite and wind power.

That’s right, snowkiting is so cool that it allows a rider to soar up or down a slope while doing 360s and other tricks, rather than merely sliding downhill and fighting to stay on their feet.

Just make sure that you don’t let go of that kite handle.

If you don’t have an outstanding balance on a surfboard, it is recommended that you try handboarding instead.

People glide across the ocean by just riding the wave while paddling on little surfboards attached to one or both hands.

Yes, it’s similar to typical bodyboarding but much more intense.

Have you ever imagined yourself playing underwater hockey?

Anyone who has dived into the deep end with a snorkel and a tiny stick to play octopush has.

This is due to the fact that the sport is played while two teams of six push a puck around the bottom of a swimming pool.

So, for those who can’t exactly skate, this may be the best approach to satisfy your desire to play hockey.

Did you find this blog informative? If so, please share your thoughts in the comments section below. Click here to contact us for more information on unique sports you didn’t know about. We would be happy to assist you with your queries.

Q1. What are the examples of some lesser-known sports?

Ans- These are some of the lesser-known sports-

Q2. What is the newest sport invented?

Ans- Bossaball is a clever mash-up of volleyball, soccer, gymnastics, capoeira, and extreme trampolining. It was invented by Filip Eyckmans between 2003 and 2005, and is played on an inflatable court that takes less than 45 minutes to put up.

Ans- Yes, you can invent a sport. Rules of the game cannot be trademarked, however, they can be protected by copyright, and reviewing them through time also protects them. Any equipment that is unique to a new sport can be trademarked.

Admin iSchoolConnect
Study Abroad Expert
`
Quiz question for kids | Fun trivia What is a comet, and how is it formed?