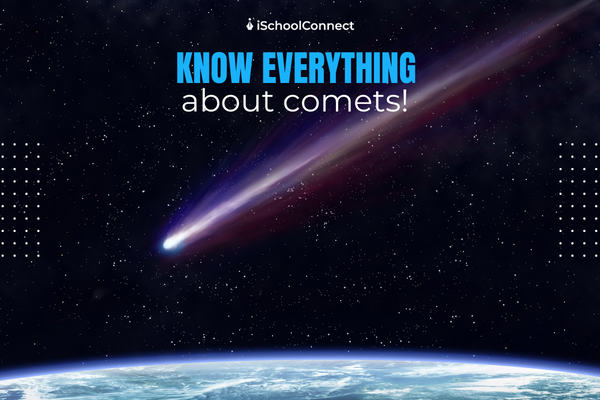 What is a comet, and how is it formed?

Comets are huge dust and ice particles that circle the sun. These ancient objects, well known for their long, streaming tails, are relics from the solar system’s birth 4.6 billion years ago. Keep reading to know more about what is a comet.

Comets are sometimes known as ‘dirty snowballs.’ They were leftovers from billions of years ago when the development of stars and planets occurred. Comets in our solar system begin as large chunks of rock and ice drifting around in the Oort Cloud before racing around the sun with their characteristic large tails. When the gravity of a massive passing body, such as a star, becomes powerful enough, large pieces of ice are drawn away from the cloud and toward the sun. As the ice ball approaches the sun, the sun’s radiation begins to melt some of the ice that makes up the comet.

The melted ice forms a gaseous tail that spreads away from the heat source (the sun). Thus, comets are formed. In this blog, we will further understand what is a comet.

The solar wind pushes the tail outward. The gravity of all the planets and stars it travels through keeps the comet moving and guides its path. When a comet enters our solar system, the sun is responsible for the majority of the gravity controlling the comet’s speed. As a comet gets closer to the sun, it accelerates due to the sun’s gravity, pulling on it more strongly as it gets closer.

In addition to traveling faster near the sun, the comet’s tail will lengthen as more ice evaporates.

Where do comets come from?

Comets are thought to have two origins.

Jan Oort, a Danish astronomer, postulated that comets live in a massive cloud in the solar system’s outskirts, far beyond Pluto’s orbit. The Oort Cloud is the name given to this phenomenon. According to statistics, it might include a trillion comets and account for a considerable portion of the solar system’s mass. However, because the individual comets are so few and far away, scientists have no direct evidence of the Oort Cloud’s existence.

What brings comets near Earth?

A planet’s gravity or star can pull comets from their homes in the Kuiper Belt or Oort Cloud. The tug can redirect a comet toward the sun. These redirected paths of the comets resemble lengthy, stretched ovals.

As the comet is drawn closer and closer to the sun, it swings around behind the sun and returns to where it came from. Some comets collide with the sun and are never seen again. When the comet is in the inner solar system, it is either coming or going; that’s when we might see it in our skies.

What are the parts of a comet?

How are the comet tails formed?

Did you find this blog informative? If so, please share your thoughts in the comments section below. Click here to contact us for more information on what is a comet. We would be happy to assist you with your queries.

Q1. Is comet a shooting star?

Ans-Meteors (or shooting stars) are not the same as comets, though they are related.

A comet is a ball of ice and dust that orbits the sun (usually millions of miles from Earth) as the sun heats and vaporizes the ice in the nucleus, gas escapes, carrying dust particles with it.

Q2. What are 3 facts about comets?

Ans– Unlike fast short-period comets, K2 PanSTARRS will remain visible in the sky for the rest of 2022. If you know where to look, you can still see the ice visitor from the distant Oort Cloud.