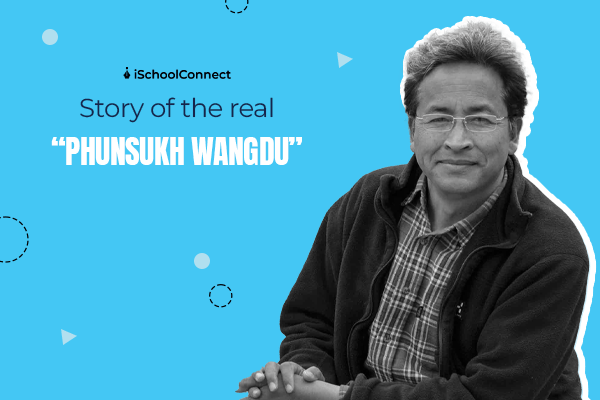 Phunsukh Wangdu is a character that most enthusiastic film watchers remember fondly.
However, the real inspiration behind this character stems from the iconic personality of Sonam Wangchuk.
Here is everything you need to know about this innovator and engineer!

Sonam Wangchuk is the personality that inspired the fictional character of Phunsukh Wangdu in the blockbuster Bollywood film ‘3 Idiots.’

Sonam Wangchuk is a Ladakh-based engineer who has contributed significantly to technological revolutions in the field of education and learning. His work continues to be a source of inspiration to millions across the globe.

Sonam Wangchuk is also a philanthropist who has worked hard to bring learning-oriented and skill-based education to Ladakh. His efforts are transforming the educational system in the state, helping children find new and engaging ways to improve their employability.

Here is everything you need to know about Sonam Wangchuk, the real-life Phunsukh Wangdu.

Sonam Wangchuk was born in 1966, in the city of Uleytokpo near Alichi in Ladakh. He did not enroll in school until the age of 9, primarily because there were not a lot of schools in his village.

His father was Sonam Wangyal, a politician who was also the minister of the state government in Srinagar.

One of the key features of this real-life Phunsukh Wangdu was that he looked significantly different compared to other students. As a result, he was often labeled as ‘stupid’ owing to his lack of responsiveness. He often recalls this as the darkest period of his life.

In 1977, he left for Delhi because he was struggling with society. He pleaded his case to Vishesh Kendriya Vidyalaya’s school principal.

Soon after, he completed his BTech in Mechanical Engineering from REC Srinagar (now known as the National Institute of Technology Srinagar).

Sonam Wangchuk had a large number of differences with his father over his decision to pursue higher education in the engineering stream. As a result, he had to finance his education. He also studied for two years at Craterre School of Architecture in Grenoble.

Much like Phunsukh Wangdu, Sonam Wangchuk is an advocator of high-quality school reforms that promote learning and development. Along with his brother and five peers, Wangchuk founded the Students’ Educational and Cultural Movement of Ladakh (SECMOL).

SECMOL’s launch in correspondence with the government education department and the village population as Operation New Hope.

SECMOL is a mix of experiential learning, introspection, and counseling. This type of educational movement also welcomes students who struggle to cope with traditional methods of schooling.

SECMOL focuses on life skills and a wide range of engaging learning methods that incorporate a wide range of schooling methods. An example is that the time zone is one hour ahead of the Indian Standard Time to ensure that students sleep early and wake up fresh for learning at sunrise.

The invention of ice stupas

If there is one thing the iconic character Phunsukh Wangdu is well-known for, he can find new innovative solutions to existing problems. The highlight is Wangchuk’s remarkable ‘ice stupa’ project.

Wangchuk’s aim was to find a solution for the water crises undergoing by the farmers of Ladakh during the critical planting months of April & May.

By February 2014, Sonam Wangchuk had successfully built a two-story prototype of different ice stupas that could store roughly 150,000 liters of stream water.

In 2016, Wangchuk began applying the ‘ice stupa’ technique for excellent disaster mitigation strategies at high-altitude glacier lakes. He was cordially invited by the Government of Sikkim to apply the technique to another dangerous lake in the state.

Phunsukh Wangdu, in the film ‘3 Idiots, was an innovator who found new ways to cater to the requirements of his community. This trait stems from Sonam Wangchuk’s inventive streak.

Sonam Wangchuk came up with a unique idea to help 50,000 Indian troops who were deployed at higher altitude areas in the freezing winters.

He devised the concept of a mobile solar-powered tent. This tent could accommodate up to 10 soldiers and be divided into two separate chambers, a greenhouse, and a specialized sleeping chamber. Both of the chambers were divided by a portable wall which was referred to as a ‘heat bank’.

Sonam Wangchuk’s inventions and efforts have been appreciated and applauded at multiple stages during his career.

Some of the top awards he has won include-

Was this blog informative? If yes, please share your thoughts in the comments below. Click here to reach out to us for more information on Sonam Wangchuk, the personality who inspired the fictional character Phunsukh Wangdu. We would be happy to assist you with your queries!

Answer – ‘3 Idiots’ was directed by Rajkumar Hirani and released in 2009.

Answer – Yes, he did! Sonam Wangchuk was a significant contributor to the launch of the New Ladakh Movement (NLM) which is a social campaign. This campaign aimed to promote sustainable education, the environment, and the economy.

Q3. What is the Ladakh Voluntary Network (LVN)?

Answer – The Ladakh Voluntary Network (LVN) is a network of Ladakhi NGOs. Sonam Wangchuk founded this network and served on its executive committee till 2005.