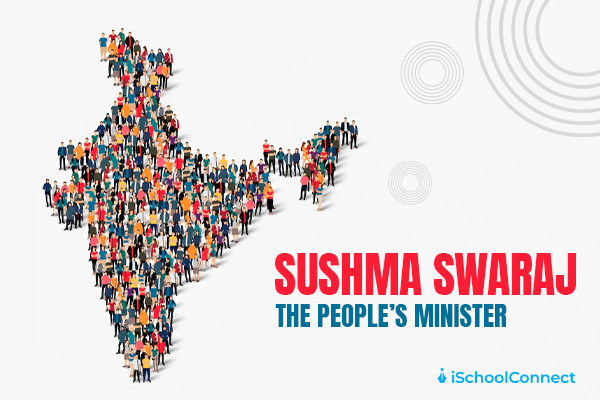 Sushma Swaraj | The leader who won hearts and inspired minds!

Are you wondering who was the first female Chief Minister of India? If yes, in many aspects, Sushma Swaraj’s political path is the tale of a woman who, one by one, cracked glass ceilings to prove how women can triumph in politics, an area traditionally controlled by men. Keep scrolling to know all about her!

Sushma Swaraj was an Indian politician and Supreme Court lawyer. She was a member of the Bharatiya Janata Party(BJP). She was also India’s Minister of External Affairs during Narendra Modi’s first administration.

Swaraj was elected thrice to the Legislative Assembly as well as seven times in the Parliament. In 1977, at the age of 25, she was the youngest cabinet minister in the Indian state of Haryana. Her election was from Vidisha in Madhya Pradesh in 2014.

Sushma Swaraj was born in Ambala Cantonment, Haryana, on February 14, 1952. Her parents were born in Lahore, Pakistan. Her father, Hardev Sharma, and mother, Shrimati Laxmi Devi, were both Rashtriya Swayamsevak Sangh members.

She earned a bachelor’s degree in Sanskrit and Political Science from Sanatan Dharma College in Ambala Cantonment. Subsequently, she graduated from Punjab University in Chandigarh with a law degree.

They have a daughter named Bansuri, who is an Oxford University graduate as well as an Inner Temple Barrister at Law. Additionally, Dr. Gulshan Sharma, Sushma Swaraj’s brother, is an Ayurvedic doctor in Ambala, and Vandana Sharma, her sister, is an associate professor of political science at a government college for girls in Haryana.

Sushma Swaraj served in the Haryana Legislative Assembly from 1977 to 1982, and then again from 1987 to 1990. Chief Minister Devi Lal swore her in as a Janata Party Cabinet Minister. At the age of 27, she was the state president of the Janata Party-Haryana. She served as Haryana’s Education Minister in the BJP-Lok Dal cabinet from 1987 to 1990. She became Delhi’s first female Chief Minister in October 1998 but resigned in December of the same year.

Swaraj’s election to the Rajya Sabha was in April 1990. Her service in that chamber was until 1996 when her election into the 11th Lok Sabha of the South Delhi district. In 1996, she was the Union Cabinet Minister for Information and Broadcasting under PM Atal Bihari Vajpayee’s 13-day cabinet.

Soon after a career in national politics, she resigned from the Union Cabinet in October 1998 to become Delhi’s fifth Chief Minister. From January 2003 until the National Democratic Alliance administration lost the general election in May 2004, she served as Minister of Health, Family Welfare, and Parliamentary Affairs.

In April 2006, Swaraj was re-elected to the Rajya Sabha for a third term representing Madhya Pradesh. Until April 2009, she was the Deputy Leader of the Opposition in the Rajya Sabha.

From May 2014 until May 2019, Swaraj served as India’s Minister of External Affairs under Prime Minister Narendra Modi. She was in charge of carrying out Narendra Modi’s foreign strategy. After Indira Gandhi, she was just the second woman to occupy this role.

Swaraj issued a NOC while serving as the NDA government’s Minister of External Affairs in response to a specific question raised by the UK government about the Indo-UK bilateral relationship if the UK allowed Lalit Modi. Due to Modi’s involvement in a cricket scandal in Britain since 2010, she informed the British High Commissioner that Modi’s request to attend his wife’s surgery in Portugal will be under review in accordance with their procedures.

On August 12, 2015, Mallikarjun Kharge, the leader of the Indian National Congress, tabled an Adjournment Motion in the lower house, requesting Sushma Swaraj’s resignation due to her alleged involvement in Lalit Modi case. The proposal faced rejection, but on Swaraj’s insistence, the speaker accepted. Swaraj, who intervened in the case, argued that Lalit Modi’s resident right had not been terminated since the Enforcement Directorate had not filed an extradition application. By voice voting, the Adjournment Motion was rejected.

Sushma Swaraj got a heart attack on the evening of August 6, 2019. She was later transported to AIIMS New Delhi, where she died of a cardiac arrest. The next day, she was cremated with full state honors at the Lodhi cremation in Delhi.

Liked this blog? Read next: Books for UPSC | Top 10 books to help you ace your exams!

Q1. Has Sushma Swaraj ever been the leader of the opposition?

Answer – Yes, on December 21, 2009, Sushma Swaraj took over as the leader of the opposition from Lal Krishna Advani.

Answer – Swaraj practiced as an advocate in the Supreme Court of India in 1973.

Answer – She was posthumously awarded the Padma Vibhushan, India’s second-highest civilian honor, in the field of Public Affairs in 2020.