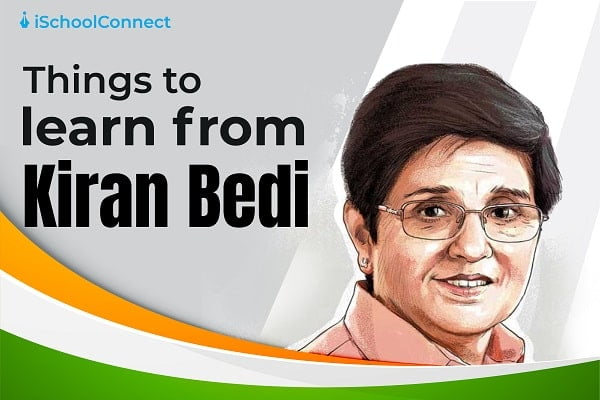 Kiran Bedi | 5 amazing things to know about this lady!

Kiran Bedi is a much-celebrated name for all the right reasons. A social activist, an IPS officer, and an icon who continues to inspire many. Let’s know more about this iconic personality in this blog.

Kiran Bedi, the first-ever woman Indian Police Service (IPS) Officer of India, is one of the most prominent social activists. Apart from being an icon of modern-day feminism in India, she is also a role model to an entire generation of Indians. From introducing social reforms to leading various campaigns, she has done it all to bring a positive change in society.

If you want to know more about Kiran Bedi, you have landed at the right place! All you need to do is keep reading!

Who is Kiran Bedi?

Born into a Punjabi business family in Amritsar on June 9, 1949, Kiran Bedi had always been a lover of all things scholastic. She was an ideal student with an avid interest in lawn tennis. This pushed her to become the National Junior Lawn Tennis Champion in 1966. However, she did not stop here, and her Tennis career spanned almost 15 years, till she turned 30. This, when coupled with her other achievements, can deeply motivate any aspiring candidate for the UPSC exams. But for other aspirants, knowing about Kiran Bedi’s educational background can also prove to be quite inspirational.

Let’s look at the eventful life of this icon and draw some much-needed motivation from her success story. Here are 5 ways in which she has inspired the youth of India.

Kiran Bedi’s early education was at the Sacred Heart Convent School in Amritsar, Punjab. She had a burning passion for serving society right from this age. Therefore, she enrolled herself in the National Cadet Corps (NCC). Since her school did not offer science as a subject, she enrolled at a private institute, Cambridge College, and passed her matriculation exams with science subjects.

In 1968, this budding genius graduated with a Bachelor of Arts in English (Hons.) from the Government College for Women at Amritsar. Following this, Dr. Kiran Bedi completed her Master of Arts in Political Science from Punjab University at Chandigarh. After joining the police force as the first Indian woman IPS officer, she secured a law degree from the University of Delhi. Additionally, she also completed her Ph.D. in Social Science from IIT Delhi in 1993.

The career of this woman does not only include her ranks in the Indian police force but also in several other fields. Dr. Kiran Bedi began her career at the age of 14 as a professional tennis player. In 1964, she tried for the National Junior Lawn Tennis Championship at Delhi Gymkhana Club but failed miserably. However, instead of giving up, she doubled her efforts and in 1966, won the title at the age of 17. As a result, it opened several other avenues for her in professional tennis.

While achieving all these marvelous feats, Bedi also taught as a lecturer at the Khalsa College for Women in Amritsar from 1970 to 1972. By the end of 1972, Bedi cleared her UPSC examinations and became the first woman IPS officer of India.

Kiran Bedi started her career in the police force as an Assistant Superintendent of Police (ASP) in 1975. However, with talents as diverse as hers, she soon progressed to several other ranks within the Indian Police force. She is known to have held other prestigious designations like –

Besides, she was also the only Indian woman to be appointed as the Civilian Police Advisor for United Nations Peacekeeping operations. On 27th November 2007, she opted for a voluntary resignation bringing her successful 35-year-long police career to a majestic closure.

Due to her ambitious career and national-level goodwill, she was appointed as the 24th Lieutenant Governor of the Union Territory of Puducherry. She has recently completed her service as the Lieutenant Governor on 16th February 2021. At the age of 76, she now pursues academics and social activism.

Among the several social service endeavors undertaken by Kiran Bedi, two have been so successful that they are now present pan-India. These endeavors provide social welfare services to many groups of underprivileged people.

If you aren’t already brimming with motivation, then you should read through the long list of accolades, awards, and achievements garnered by Kiran Bedi.

All in all, these phenomenal achievements have enabled Bedi to garner enough media coverage resulting in her becoming a modern icon revered by the youth of India.

Kiran Bedi is not merely the first woman IPS officer but has also become a popular television reality show host. From 2009 to 2010, she had her own TV show, which was largely responsible for adding to her nationwide popularity and acceptance. These achievements also led to her becoming an inspiration for an entire generation of Indian youth.

We hope you enjoyed reading about Kiran Bedi in this blog! If you have any questions/suggestions, let us know by reaching out to us!

Want to read more about such iconic personalities? Here’s a perfect read about Arundhati Roy for you.

Answer- After resigning from her post as the Lieutenant Governor of Puducherry, Kiran Bedi is now back to writing books and working for social causes. According to recent reports, she now lives in Delhi.

Answer- She is a role model for many because of her achievements and awards in several sectors of public life. She has been a national-level Tennis player, the first woman IPS officer in India, and a Lieutenant Governor-General. Besides, she is also an author and a social activist.

Q3. What qualities is Kiran Bedi known for?

Answer- Kiran Bedi is known for her bravery, honesty, integrity, perseverance, and resilience. If you wish to attain these qualities, then reading all about her life and achievements can surely inspire you to inculcate them.