>  Blog  >  Motivation   >   5 famous personalities that you should know about 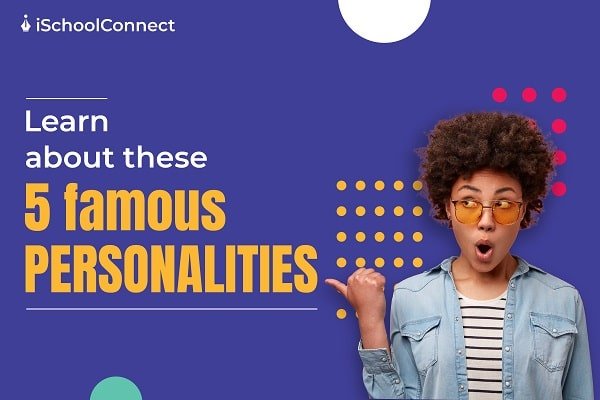 5 famous personalities that you should know about

Have you ever been inspired by someone famous? Do you want to become like them? Well, we have listed some famous personalities who can motivate you to become the best version of yourself. Read ahead!

People from all walks of life have the ability to inspire us. The list may include some well-known individuals who have worked tirelessly to achieve their goals. From their struggles to how they have achieved success, everything is worth knowing.

With these fascinating facts in mind, we’ve compiled a list of the top 5 famous personalities from around the world to inspire you. These individuals have not only achieved great success, but they have also inspired countless others to dream big and achieve their goals.

Robert Downey Jr. is one of the famous personalities and a favorite movie star of many. The Iron man star has assets worth more than $300 Million and is one of the highest-paid actors in Hollywood. Here is his story about rising above the challenges:

Justin Beiber is a Canadian singer who gained recognition with his debut seven-track album, My World (2009), and became the sensational teen pop idol admired by many.

He achieved commercial success through his studio album, My World 2.0 that topped the Billboard, positioning him among the youngest pop stars on the top chart in nearly 47 years. Besides this, he has been a part of many business partnerships with different brands like Calvin Klein, Schmidt’s Naturals, Proactive, Walmart, Nicole by OPI, and Adidas.

This famous singer has achieved so much at a young age. This makes us believe that your skills and hard work can take you places.  As per some reports, his current net worth is more than $285 million.

He is one of the most successful businessmen, an influencer whom the majority of the youth follow, and an environmentalist who uses his ideas to make the world work efficiently.

Elon Musk is the CEO, founder, and chief engineer at SpaceX. He is also a Product Architect and CEO at Tesla Inc. He has been said to be the richest man in the world, with an estimated net worth of over US$300 billion.

Besides being a successful businessman, he inspires many people to think about how they can change the world for the better with innovative products and services.

Dwayne Johnson is also known by many through his ring name, The Rock.

When it comes to successful men in the business domain, Jeff Bezos remains on the top. Jeff is an American media proprietor, entrepreneur, investor, and computer engineer.

He is the founder and the CEO of Amazon. With a net worth of around US$205 billion as of November 2021, according to Forbes and Bloomberg’s billionaire index, he is the second richest man in the world.

Beginning with only an online book store, he grew Amazon into the service it is today. Amazon has a presence in everything from e-commerce to video streaming, cloud computing, and artificial intelligence.

His company, Amazon, has helped many small businesses survive and thrive; the method of selling products online has reached out to people all over the world, demonstrating how beneficial Jeff Bezos’ vision was.

It’s always nice to have someone to look up to or someone who can motivate you to reach your objectives. To succeed in life, learn from such people. These famous personalities had one thing in common, i.e., consistency, so, whatever you do, be consistent in it. Then, you are surely going to fulfill your dreams.

That’s all we have for you in this blog! If you have any questions for us, feel free to reach out!

Till then, keep dreaming big!

Q1. What are some of the common qualities of famous personalities?

Answer- Some of the characteristics that famous people share are:

Answer- You can be famous by working hard for what you believe in, working for the betterment of the public and the planet, like some of the famous personalities have done.

Q3. How do you calculate the net worth of a famous personality?

Answer- Salary details, real estate holdings, divorces, record sales, royalties, and endorsements are all used to calculate the figures. We calculate the net worth of people from a formula that accounts for taxes, manager’s fees, agent’s fees, and living expenses.

Yogita L.
Study Abroad Expert
`
Sudha Murthy | Learn about the woman who inspires many! Top 8 most iconic fictional characters of all time