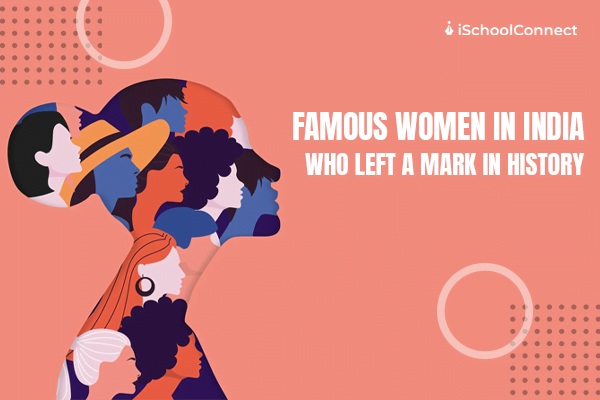 Top 5 most famous women in India

India is a country with rich culture and virtues. Indians worship goddesses as part of their culture and as true devotees. Women in India are considered brave, strong, cultured, and opinionated, just like the goddesses. Let us have a look at the top 5 most famous women in India and their contributions.

In early India, women were expected to cook food, bear children, and act as housemaids. The earning of livelihood was left to the men, and this was considered the way of life. It was a woman’s duty to serve her husband and children by suppressing her aspirations and desires. We are now living in the 21st century, but these instances still take place.  Today, women have raised the bar. A woman’s abilities and skills demonstrate to the world that she is capable of doing more than she was previously thought of. Today’s women can cook, clean, work, take care of family members, manage the household and even find time for some rejuvenation. The article talks about the famous women in India who have managed to rule the country and set an example for the women’s force.

Why women can be the best entrepreneurs?

Why do you think women can be the best entrepreneurs? This is a million-dollar question!

Women are built with instincts and a strong mental attitude, which allows them to make decisions with a clear mind.

Their decision-making power is great, and their emotional quotient is an added virtue that keeps them bound to the people working for them.

Like a mother who cares for her children, a woman entrepreneur will always think about the company and its people as a whole and care for their necessities as well.

She will tend to their issues and problems with empathy and come up with easy solutions!

Her maternal instincts will bring discipline and motivation for the employees to do better.

This proves why women can be the best entrepreneurs and be a boon to their companies & firms!

Read more: Sudha Murthy | Learn about the woman who inspires many!

The following are the most famous women entrepreneurs in India-

The entrepreneurial spirit was not always popular in India, particularly among women. However, the tide is changing.

With the few opportunities available, the country’s female population has chosen entrepreneurship as a profession. The courage with which Indian women have walked the tough road to entrepreneurship in recent years is truly admirable.

Women entrepreneurs of all ages and backgrounds are breaking stereotypes and changing the business landscape in India.

The Indian orthodox thinking leads women to quit their current jobs or pursue their careers once their child is fully grown.

Falguni Nayar was never subjected to such pressures.

After an impressive corporate career spanning two decades, she founded Nykaa at the age of 49.

Falguni Nayar learned the tricks of the trade in business & networking at a young age, growing up in a business environment encouraged by her determined father.

She began her second innings in 2012, after her successful professional career with Kotak Mahindra Group, by creating an e-commerce platform selling women’s beauty products.

The brand is a nationwide name for quality products and is loved by everyone.

Falguni was named one of Business Today’s ‘Most Powerful Women in Business’ in 2017 and received the ‘Woman Ahead’ award at the Economic Times Startup Awards 2017.

Hence, she is rightly one of the most famous women in India.

The topic revolving around menstruation is still frowned upon in the 21st century. Women and girls have no freedom to talk about the subject openly without feeling awkward.

Aditi Gupta decided not only to break the taboo but also to educate young girls about the science behind the biological process. Menstrupedia, the acclaimed comic book guide, was born from this ambition.

Since she was a child, Gupta had to deal with embarrassment whenever her periods were mentioned. She realized that this is the reality faced by more than 120 adolescent girls on a daily basis across the country.

As a result, in 2012, she co-founded Menstrupedia with her now-husband and business partner, Tuhin Paul.

This comic book is a guide for girls aged nine and above. The book contains real-life experiences that will help them handle a situation more effectively.

Aditi and Tuhin recently received 50 lakhs at 20% equity from Namita Thapar (CEO of Emcure Pharmaceuticals) as part of their funding through the reality show Shark Tank, India.

Kiran Mazumdar-Shaw is a billionaire entrepreneur from India. She is the chairperson and managing director of Biocon Limited, which is headquartered in Bangalore. She also served as the former chairperson of the Indian Institute of Management in Bangalore.

But her information, knowledge, and experience from Australia came in handy.

Mazumdar-Shaw has received numerous honors, including the Othmer Gold Medal, and Forbes named her the 68th most powerful woman in the world in 2019.

Hence, she can definitely be included in the list of the most famous women in India.

Vandana Luthra chairs the Beauty and Wellness Sector Skill and Council (B&WSSC). She was appointed chairperson of this sector for the first time in 2014.

This is a government of India initiative that provides beauty industry skill training.

Luthra was ranked #26 on Forbes Asia’s list of 50 Power Businesswomen in 2016. VLCC is one of the country’s best beauty and wellness chain of spas.

It operates in 326 locations across 153 cities in 13 countries in South Asia, South East Asia, the GCC region, and East Africa.

There are 4000 people working in the industry, including medical professionals, nutritionists, physiotherapists, cosmetologists, and beauty professionals.

Vandana has received numerous awards and accolades, including the Padma Shri (2013) from the Government of India and the Women Entrepreneur of the Year Award (2010) from The Enterprise Asia.

Amazon, Flipkart, and Snapdeal are among the best e-commerce companies. It was thrilling for Radhika Ghai, co-founder of ShopClues, to be one of the female entrepreneurs making a name for herself among many competitors.

Radhika wished to explore the e-commerce setup in India while pursuing her MBA in the United States in 2012.

She returned to the country after relentless encouragement from her partner Sandeep, only to compete against major e-commerce platforms.

Radhika and Sanjay Sethi founded ShopClues as a platform that competitively connects buyers and merchants with very little capital. Within five years, it had grown to become a company with a valuation of $1.1 Billion.

Such brave, competent, and strong women are much needed in the country and the world. They continue to break barriers and set new standards for every woman.

Women-owned businesses, for example, in the United States are growing at more than twice the rate of all other businesses, contributing nearly 3 trillion to the economy, and directly employing 23 million people. Female entrepreneurship is also growing in developing countries, with an estimated 8 million to 10 million formal small and medium-sized enterprises (SMEs) with at least one female owner.

These 5 personalities can easily be recognized as the most famous women in India, as they have earned this title with their work and contributions to women’s upliftment.

Did you enjoy this blog? If yes, please share your thoughts in the comments below. Click here to reach out to us for more information on the Top 5 most famous women in India. We would be happy to assist you with your queries!

Q1. Who is known as the first female entrepreneur in India?

Answer – Kalpana Saroj, the CEO of Kamani Tubes, is known as the first female entrepreneur in India.

Q2. Who is the youngest entrepreneur in India?

Answer – Sreelakshmi Suresh is India’s youngest female entrepreneur. At the age of 21, Sreelakshmi became the world’s youngest web designer-turned-CEO in 2020.

Q3. Who is the richest woman entrepreneur in India?

Answer- Falguni Nayar, the founder of Nykaa, is the richest woman entrepreneur in India.