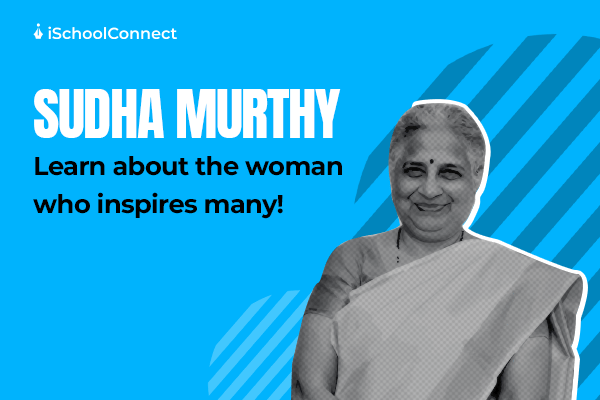 Sudha Murthy | Learn about the woman who inspires many!

Sudha Murty is one of India’s most well-known female figures. From being a prolific English and Kannada writer to carrying out social work, here is her story that will inspire you!

Sudha Murthy | Here’s everything you should know about her!

Sudha Murthy is one of those women who are born to motivate others. From writing books to working diligently for society, her life is a saga that you need to know.

If you are interested in learning about Sudha Murthy, look no further. We have covered all about her life in detail. This story is a dose of inspiration if you are feeling lost. So, let’s begin!

Who is Sudha Murthy?

Sudha Murthy is an individual with a penchant for creating waves of social reform and innovation with her thoughts and actions. She is an entrepreneur, philanthropist, and writer whose work has been recognized across the country.

She is currently the chairperson and backbone of Infosys, one of the leading IT companies in India. Supporting the organization as a co-founder with her husband and founder, Narayan Murthy, she has experimented with a wide range of careers. This includes being an engineer, entrepreneur, author, and philanthropist.

Let’s start from the beginning of her journey to better understand the impact of the books by Sudha Murthy and her work.

Sudha Murthy was born on 19th August 1950 to Vimala Kulkarni and Dr. R. H. Kulkarni in Shiggaon, a village in Karnataka. Her father was a surgeon and a professor at the local university, while her mother was a school teacher.

She was raised with her three siblings by her mother, father, and maternal grandparents, the latter significantly influencing her writing.

The middle-class family was extremely education-oriented and supported Sudha in all of her academic endeavors. The result was a young woman pursuing the then male-dominant field of Engineering from B. V. B. College of Engineering and Technology. This college is now known as KLE Technological University. Later, she completed a Master’s course in Computer Science from the Indian Institute of Science in 1974.

A dedicated, sincere, and committed student, she emerged as a topper in her Bachelor’s and Master’s degrees. Consequently, the then chief minister of Karnataka recognized her efforts by awarding her a gold medal for the same.

Sudha Murthy is a pioneer in educational development and an advocate of women’s rights. Her postcard to the Chairman of TELCO (known as Tata Motors today) telling about the gender bias in the recruitment process is proof of this. As a result of the blunt note, she was called to a special interview and immediately employed as the first female engineer in India. Consequently, she joined as a Development Engineer, and her job responsibilities included redefining the job policies of the organization.

Initially, her job location was Pune, but she also worked in Jamshedpur and Mumbai. While working in Pune, she met and married N. R. Narayana Murthy soon after.

Read: 7 personal development books that every student should read!

On July 2nd, 1981, Sudha Murthy co-founded the IT company, Infosys with her husband, Narayan Murthy, supporting him with the initial investment. Years later, in 1996, Murthy established the Infosys Foundation. This foundation was a stepping stone towards doing all the good:

Sudha Murthy | Career as an Author

Sudha Murthy is a proficient author in English, Marathi, and Kannada. She is the writer of over 60 different English and Kannada books. Besides, she also penned “Dollar Bahu, ” later adapted as a drama series by Zee TV in 2001. The majority of her books have been published by Penguin.

Some of the popular books written by Sudha Murthy include:

Sudha Murthy’s sincerity and dedication toward the community and her profession have not gone unnoticed. The country applauded and recognized her talents with the following awards:

Why is Sudha Murthy an inspiration?

A woman who refused to stay on the sidelines because of the large gender bias of the country, Sudha Murthy is an icon to the youth of today. These 3 traits sum up her personality and the reason for her being an inspiration:

Sudha Murthy is easily one of the richest women in the country but is far from flaunting her wealth to the masses. One of the key aspects of Sudha Murthy is the simple values that she adheres to in a world that emphasizes materialism. She sure knows the art of simplicity, and being a genuine human being is something she does flawlessly!

Women, she believes, should not be afraid to express themselves. She would not have been given a special interview if she had not decided to speak up against gender bias in the recruitment process.

Her honesty and fearlessness in sharing her thoughts resulted in her employment as the first woman engineer in the country. Therefore, if you aspire to develop your personality, Sudha Murthy is an excellent figure to learn from!

If she has done it, you can too!

3. Gives back to the society

One of the best things that we as human beings can do is care for the underprivileged. Sudha Murthy stands by the belief that money always changes hands and that giving back to society fosters significant goodwill.

Her noble beliefs are reflected in her active participation in social work for art and culture, public hygiene, healthcare, poverty alleviation, and women empowerment and education. Her foundation (Sudha Murthy Foundation) has undertaken projects to build schools, toilets, and houses in several underprivileged communities across the country.

Is there any other information about Sudha Murthy that you would like us to include? Let us know by reaching out to us!

Liked this blog? Read: Rani Laxmibai | The epitome of courage and bravery

Q2. How old was Sudha Murthy when she got a job at TELCO (TATA Motors)?

Answer – Sudha Murthy was 24 years old when she was first employed by TELCO.

Q3. How many children does Sudha Murthy have?

Yogita L.
Study Abroad Expert
`
Psychology facts | 50 interesting facts you must know about! 5 famous personalities that you should know about