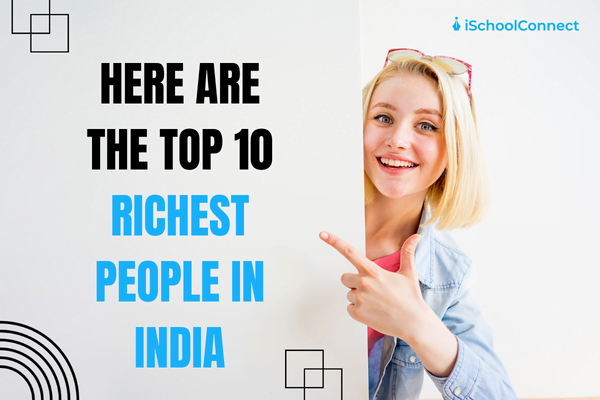 Wealth rankings serve as a representation of a company’s identity in the market, including what it does, who it is, its standards of quality, its reliability, and its reputation. Read on to more about top 10 richest person in India.

India has produced a sizable number of billionaires, many of whom are among the world’s wealthiest people. Indian billionaires have significantly contributed to the development of the nation’s economy, and they come from a variety of industry backgrounds. Since the majority of billionaires have their fortunes invested in stocks that are traded publicly, wealth will inevitably fluctuate in the face of erratic market conditions. The Forbes publication ‘The World’s Real Time Billionaires 2022’ has released its most recent ranking of the top 10 Indian billionaires. 18 of the 166 billionaires who reside in India have entered the top 500 billionaires list. Here are the top 10 richest Indians according to Forbes’ billionaires’ list for 2022.

The top 10 richest person in India are listed below

Gautam Adani and his family are the richest people in India, with a stunning net worth of $112.6 billion. The largest port in Gujarat, Mundra, is in the hands of Gautam Adani.

The Adani Group has holdings in a variety of industries, including real estate, commodities, infrastructure, and electricity generation and transmission. Adani purchased a 74% share in Mumbai International Airport, India’s second busiest airport, in September 2020.

Adani is the owner of the Abbot Point coal mining project in Australia.

Mukesh Ambani has a net worth of $100.0 billion. Petrochemicals, oil & gas, retail, and telecom are among the industries in which Reliance Industries’ founder and chairman have interests.

Reliance’s debut of 4G phone services in the Indian telecom sector in 2016 sparked a price war that destroyed other networks’ business models and created significant updates.

Mukesh Ambani raised nearly $20 billion when he sold a third of Jio to investors like Google and Facebook during the COVID-19 lockout.

With an expected wealth of $28.7 billion in 2022, Shiv Nadar, creator of HCL, is ranked third among India’s richest billionaires.

HCL began making calculators and microprocessors in 1976, and with a $102 billion revenue, it is now one of the biggest producers of software services in the nation.

In 2020, Shiv Nadar’s daughter took over as CEO of HCL after he resigned. Shiv Nadar, the Chairman of Emeritus is in charge right now. He is a prominent philanthropist in the nation and has donated more than $662 million to the Shiv Nadar Foundation to help with educational purposes.

With a net worth of $25.8 billion, Cyrus Poonawalla will rank fifth in terms of wealth in India in 2022. In 1966, he established the Serum Institute of India, which today produces the most doses of vaccines globally.

The company makes more than 1.5 billion doses of flu, polio, and measles vaccinations each year. His son Adar is the CEO of Serum Institute, which has also invested close to $800 million to construct a new factory making Covid-19 vaccines.

With a net worth of $20.2 billion, Radhakishan Damani ranks fourth among the richest people in India.

He is Avenue Supermarket’s champion. He was crowned as the nation’s retail monarch in March 2017 when the chain of stores was launched all across the nation.

In a Mumbai suburb, he began his retail career in India with just one grocery store.

Currently, the national retail network has over 221 DMart locations.

Damani owns shares in several other companies, including India Cements and the tobacco company VST. He is the owner of the 156-room Radisson Blu Resort in Alibag, a well-known seaside resort close to Mumbai.

With a net worth of $19.9 billion in 2022, Savitri Jindal and her family are the seventh-richest people in India.

The Jindal Group has holdings in steel, cement, infrastructure, and power.

Savitri Jindal, the widow of Om Prakash Jindal, the man who started the Jindal Group, is currently in charge of the organization.

After Om Prakash Jindal died in a helicopter accident in 2005, his four sons divided the group’s businesses.

Lakshmi Mittal would have a net worth of $182 billion by next year. He serves as chairman of ArcelorMittal, the largest mining and steel producer in the world, according to output, with $53.3 billion in annual sales.

2019 saw the acquisition of Essar Steel by him, which was once under the hands of billionaires Ravi Ruia and Shashi.

Lakshmi Mittal still serves as the executive chairman of ArcelorMittal despite handing over the company’s CEO duties to his son Aditya Mittal.

Kumar Birla has a net worth of $17.5 billion, making him the eighth richest person in India.

He is the leader of the Aditya Birla Group, which generates $46 billion in revenue, and is referred to as the commodities king.

The company also provides financial and telecom services. It also has holdings in cement and aluminum.

With a net worth of $16.3 billion, Dilip Shanghvi will rank ninth among the richest people in the nation in 2022.

His father handed him $200 in 1983 to launch Sun Pharma, which produced medications for mental illnesses. With an annual sales of $4.5 billion, the company is currently among the top providers of pharmaceutical supplies in the country.

Sun Pharma expanded through several pharmaceutical acquisitions, the most noteworthy of which was the $4 billion acquisition of Ranbaxy Laboratories in 2014. Shanghvi has recently made investments in both oil and gas as well as renewable energy.

Sunil Mittal, who has a net worth of $15.3 billion, is listed as the ninth richest person in India.

The second-largest telecom business in India, Bharti Airtel, is owned by Sunil Bharti Mittal, the founder, and chairman of Bharti Enterprises.

Did you find this blog informative? If so, please share your thoughts in the comments section below. Click here to contact us for more information on the top 10 richest person in India. We would be happy to assist you with your queries.

Liked this blog? Read next: Top 10 places to visit in Mongolia

Q1. Is there a rich person in India who is as rich as the richest person in the world?

Ans- On September 16, 2022, Adani’s net worth reached $155.7 billion, surpassing Jeff Bezos of Amazon. With a net worth of $273.5 billion. Adani is now only slightly behind Tesla CEO Elon Musk, who is still the richest person in the world.

Q2. Who is 2nd richest person in the world?

Ans- With a net worth of $154.7 billion, Gautam Adani briefly overtook Jeff Bezos and Bernard Arnault to claim second place, but only for a short time.

Ans- With a net worth of Rs. 57,520 crores, Falguni Nayar, founder, and CEO of the beauty e-commerce site, Nykaa surpassed Kiran Mazumdar Shaw, chairperson of Biocon, to claim the title of the richest self-made woman in India.