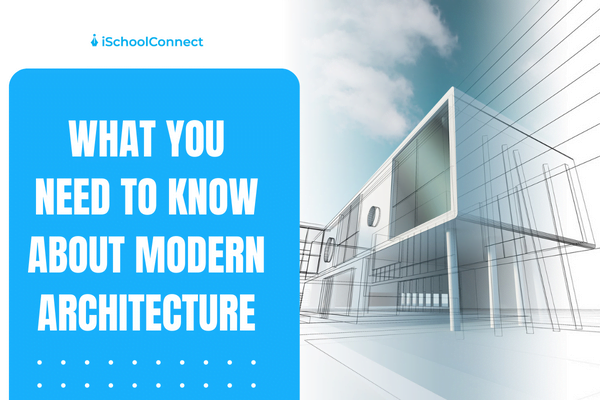 ‘’Less is more,’’ designer and architect Mies Van Der Rohe, rightfully sums up the modernist ethos and modern architecture. The demand for architecture that embodied the spirit of the new era emerged at the start of the twentieth century.

Beginning at the turn of the 20th century, the modern architecture uses the rational application of contemporary building materials and technology, the principles of functionalist planning, and the rejection of adornment and precedent from the past.

Modern architecture was primarily made up of plain form with no decoration. Each floor plan was sensible and useful. Attention is the foundation of contemporary architecture, which is produced by lines, fundamental forms, and shapes.

Thus, simple and plain geometric forms, rectangular shapes, and linear features comprise the primary characteristics of modern architecture. The design of skyscrapers is where this modern aesthetic became most obvious.

The German architectural and art school Bauhaus had a significant influence on modern architecture.

Following the Industrial Revolution, new building techniques were created as a result of easy access to new modern building materials (1830–40). The most frequently utilized materials in modern construction were-

A vast group of comparable structures that appeared in many nations during the 1920s and 1950s as a result of the work of many renowned modern architects are collectively referred to as modern architecture.

European modernism was the birthplace of the style, which later influenced American design. In the 1980s, modern architecture remained the pre-eminent architectural style for corporate and institutional structures.

Read more: Architecture course – Everything you need to know

Here is a rundown of the main architectural movements that made up modernism.

It is the resource for understanding the evolution of 20th-century design and is equipped with illustrations of each style, demonstrating the Modernist practice that underpinned the theory.

Walter Gropius established a German school of architecture and the arts in 1919, giving rise to the name The Bauhaus, which is derived from the German language for ‘Construction House.’

The institution not only served as a model for several architectural schools that came after it, but it also lent its name to a distinct architectural style that combined balanced forms with abstract shapes and placed a strong focus on function.

The style characterization is done through the minimalism of design, the use of black, white, and primary colors, as well as the concision of horizontal and vertical elements.

El Lissitzky and Vladimir Tatlin are two well-known Russian constructivist architects, albeit both are best known for their concepts and unrealized projects.

In addition to inspiring odd massings and utopian aspirations, expressionism investigated new technical possibilities that resulted from the mass production of steel, masonry, and glass.

The foundation of functionalism is the idea that a building’s design should reflect its purpose and function. The style, which emerged in the years following World War I is linked to contemporary humanism and socialism.

The Bauhaus and De Stijl movements of the 1920s gave rise to minimalism, which emphasized the use of straightforward design components without any embellishment or decoration.

It was made popular by designers like Mies van der Rohe, who argued that stripping a design down to its most fundamental components shows its actual core. Pure geometric forms, simple materials, repetition, and clear lines are characteristics of the style.

The International Style denotes the period when European Modernism spread across the globe, especially in the United States. It is an outgrowth of early Modernist concepts in Europe.

Monolithic skyscrapers with curtain walling, flat roofs, and ubiquitous glazing are the definition of the American adaptation of the design. It is characterized by plain geometry and a lack of decoration.

The post-war Japanese movement known as metabolism gave megastructures organic growth. By publishing their Metabolism manifesto in 1960, a group of young designers led by Kiyonori Kikutake, Kisho Kurokawa, and Fumihiko Maki was able to draw substantial public attention to the fashion, which was influenced by biological processes and Marxist beliefs. Modularity, prefabrication, adaptability, and solid core infrastructures are among the traits.

In the 1950s, British architects Alison and Peter Smithson invented the term ‘brutalism.’ The ‘Béton brut’ (raw concrete) that Le Corbusier is known for, popularised the style, which is distinguished by its monolithic forms, hard geometric patterns, and odd shapes.

Brutalist structures are often covered in rough, unfinished concrete, whether they are government structures, educational facilities, or high-rise residences.

A philosophical shift that was equally comprehensive as the Modernism it wanted to replace, led to the creation of Postmodern architecture, which aimed to offer a more contextual approach to design and reconsider the fundamental modernist concepts.

The style stressed transparency in design and construction, communicating the structure and function of the building through exposed features by utilizing new materials and technology.

It is a branch of postmodernism and is distinguished by a lack of harmony, continuity, or symmetry in structures.

Deconstructivism frequently modifies a structure’s exterior by forming non-rectilinear shapes that warp and displace parts, giving the impression of controlled chaos and unpredictability.

There have been many developments in the field of architecture. It has gone from traditional to modern and delivers the ideal balance of practicality and design.

Modern architecture uses the rational application of contemporary building materials and technology, the principles of functionalist planning, and the rejection of adornment.

Modern architecture has evolved from a 20th-century design and is equipped with illustrations of each style, demonstrating the Modernist practice that underpinned the theory.

Did you find this blog informative? If so, please share your thoughts in the comments section below.  Click here to contact us for more information on modern architecture. We would be happy to assist you with your queries.

Q1. What are the 3 modern architectural structures?

Ans- Frank Lloyd Wright, who was born in Richland Center, Wisconsin, in 1867, is regarded as the founder of modern architecture and the greatest American architect of all time. He is one of America’s most recognizable architects.

Q3. When was modern architecture most common?

Ans- Modernism continued to have an impact on vernacular design long into the late 20th century, even though the best examples of modern architecture in the United States are mainly from the early- and mid-20th centuries.