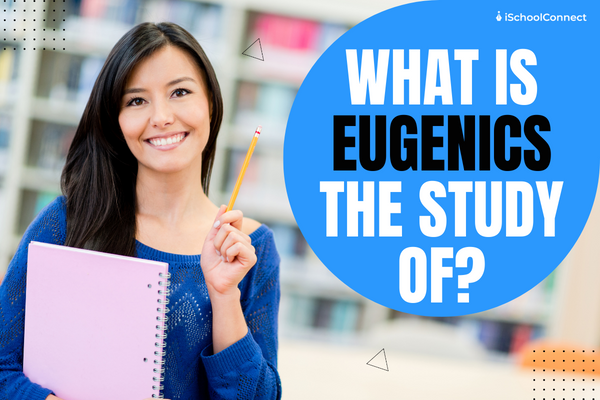 Eugenics is the practice or advocacy of selectively mating people with certain desirable hereditary characteristics in order to improve the human species. It seeks to alleviate human suffering by ‘breeding out’ disease, disability, and other ostensibly undesirable characteristics from the human population.

Eugenics, which derives its name from the Greek words for ‘good’ and ‘origin’ or ‘good birth,’ is the application of genetics and heredity to the improvement of the human race. Eugenics, often used in reference to humans, is the selection of desired heritable traits to enhance future generations. Francis Galton, a British explorer and naturalist created the word Eugenics in 1883. He supported a system that would provide “the more suited races or strains of blood a higher chance of prevailing swiftly over the less suitable.” His inspiration for this was Charles Darwin’s theory of natural selection. Early in the 1900s, social Darwinism—a widely accepted view that claimed “survival of the fittest” dictated human behavior in society—helped this subject become a legitimate field of scientific inquiry. Eugenics had the support of numerous scientific and political figures by the outbreak of World War I.

However, it failed as a science in the 1930s and 1940s, when eugenicists’ assumptions were heavily criticised, and the Nazis used this concept to justify the annihilation of entire races.

Conceptually, there are two types of eugenic strategies.

Positive Eugenics aims to promote genetically advantageous individuals’ procreation, such as the procreation of prosperous, intellectual, and healthy individuals. The use of financial and political stimulants, targeted demographic studies, in vitro fertilization, egg transplants, and cloning are a few potential strategies.

Read more: Father of Genetics | Learn about some great contributions!

Both positive and negative can be coercive; for instance, in Nazi Germany, abortion was forbidden for women the state deemed fit.

The word is currently emotionally charged, possibly permanently, with negative meanings. In the current debate, the term “eugenics” is all that can be considered unsettling or unwanted about contemporary advances in genetics, molecular biology, and their usage in genetic engineering. These advancements and applications are viewed in the context of the ambivalence of scientific development. On the one hand, there is hope that biomedical advancement will free humanity from illness and suffering; On the other hand, there is fear and anxiety due to genetic engineering’s apparent total control over human life.

Did you find this blog informative? If so, please share your thoughts in the comments below. Click here to contact us for more information on Eugenics. We would be happy to assist you with your queries.

Liked this blog? Read next: The key factors and applications of equine psychology

Answer- The American movement was formed during the late nineteenth century and continued as late as the 1940s.

Answer- It is morally objectionable for governments, institutions, or any third party to compel or coerce anyone’s reproductive behavior.