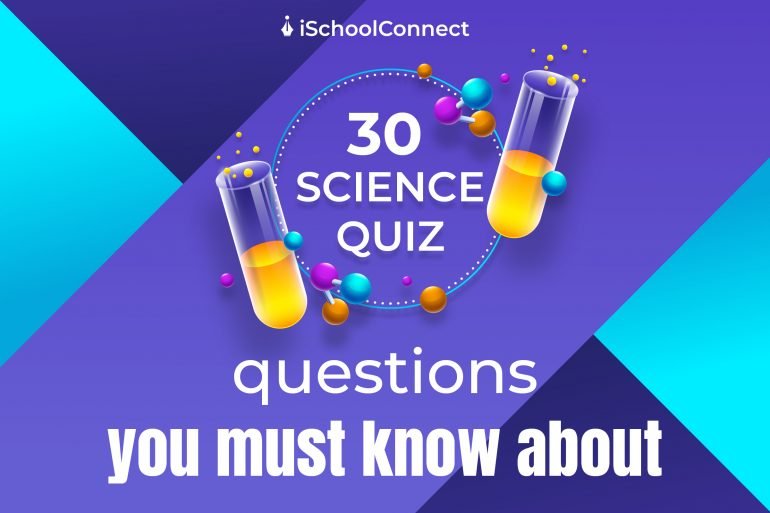 Do you want to test your knowledge of Science? If so, taking a quiz can be a perfect way and might help you win some competitions too. So, what are you waiting for? Check out this list of 30 Science quiz questions and answers and practice well.

Science quiz | Check out these questions

Science is subject that strives to answer all the ‘What’s,’ ‘Where’s,’ ‘How’s,’ and ‘Why’s.’ From explaining something as natural as how it rains to delving into the depths of the universe, science is an interesting and engaging field pursued by millions of students around the globe.

Careers in science are recognized for offering the highest-paying jobs and most dynamic positions within the industry. For example, an average scientist’s salary in the United States is around USD 174,208 annually. This number is only expected to grow for those with the right knowledge, qualifications, and experience to make a career in the field.

To reach the phenomenal heights that this course can offer, you need to have a firm foundation in it. This begins with understanding the subject matter of most high-school science textbooks.

The best way to test your knowledge and understanding of science is by figuring out what your strengths and weaknesses are. To achieve this, you need to consistently practice previous year’s solved question papers and take quizzes.

Let’s have a look at 30 science quiz questions and begin your journey to a successful career in the field!

Testing your basics in science is key to recognizing the aspects that you need to work upon. These questions are designed to help you do just that!

Q1. What is an ecosystem?

Answer – An ecosystem is the living, and non-living factors of an environment put together.

Q2. What does hydroponics mean?

Answer – Hydroponics is the science of growing plants in a liquid medium.

Q3. What is the element with a minimum atomic number of 8 electrons in its outermost shell?

Answer – The element is neon.

Q4. What is the Zeeman Effect?

Answer – The Zeeman Effect is the splitting of spectral lines by a strong magnetic field.

Q5. What is the region of space around a nucleus called where there is a very high probability of finding an electron?

Answer – The region of space around a nucleus is the orbital.

Q6. Who is the centigrade system of measurement of temperature named after?

Answer – The centigrade system of measurement of temperature is named after Anders Celsius.

Q7. What is the Albedo Effect?

Answer – The reflectivity of the Earth’s surface is referred to as the Albedo Effect.

Q8. What is the average temperature of the Earth’s surface?

Answer – The average temperature of the Earth’s surface is 14o.C or 57oF.

Q9. What does an ornithologist study?

Answer – An ornithologist studies the behavior, migration patterns, and other related aspects of birds.

Q10. How many species of elephants are there?

Answer – There are 3 species of elephants – Asian, African Forest, and African Bush.

Q11. Who is the creator of the periodic table?

Answer – The creator of the periodic table is Dmitri Mendeleev.

Q13. Who was the first astronaut?

Q14. In which part of the human body would we be able to find the hammer, anvil, and stirrup?

Answer – The hammer, anvil, and stirrup are in the “middle” ear.

Q15. Which muscle is the smallest in the human body?

Answer – The stapedius is the smallest muscle in the human body and is located in the middle ear.

Q16. What is the quantum number that gives us the shape of an atomic orbital?

Answer – The Azimuthal quantum number gives us the shape of an atomic orbital.

Q17. What are the two functional groups present within an ecosystem?

Answer – The two functional groups within an ecosystem are autotrophs and heterotrophs.

Q18. What is the technique of separation of cell components that are disrupted called?

Answer – This technique is called fractionation.

Q19. Name the atom that has a single electron.

Q21. The maximum capacity of the d-orbital is?

Answer – The maximum capacity of the d-orbital is 10 electrons.

Q22. What is the instrument ‘barometer’ used to measure?

Q23. Which of the 8 planets is the hottest planet in the solar system?

Answer – Venus is the hottest planet in the solar system, with a surface temperature of 470oC (878oF).

Q24. What material can move through electricity and heat?

Q25. What is the unit that is used to measure food energy?

Q26. What is the largest sea on the planet?

Answer – The largest sea on the planet is the Mediterranean sea. It covers an area of 1,144,800 square miles.

Q27. Which is the largest tree in the world?

Answer – The Giant Sequoia is the largest tree in the world.

Q28. Which is the fastest fish on the planet?

Q29. What are the known atomic orbitals in an atom?

Answer – The atomic orbitals in an atom are called s, p, d, and f.

Q30. What is the name of the free-living bacteria in soil that fixes nitrogen?

Answer – The free-living bacteria in soil that fixes nitrogen is Azotobacter.

Make learning Science fun by using some of the best apps, including-

We hope you liked this blog. If you did, be sure to leave a comment and share your thoughts. Get in touch with us if you have any doubts.

Q1. What are the different careers within the field of science?

Answer – Some of the most popular careers include Environmental Scientist, Epidemiologist, Biochemist, and Forensic Science Technician.

Q2. What are STEM subjects?

Answer – The STEM subjects are Science, Technology, Engineering, and Mathematics.

Q3. How much does an astronomer earn?

Q4. Who is the father of Science?

Answer- Galileo Galilei is known as the Father of Science due to his experimental scientific methodologies and contribution to the scientific revolution.

Q5. What is the world’s most prestigious science competition?

Answer- Some of the top research Science competitions include-