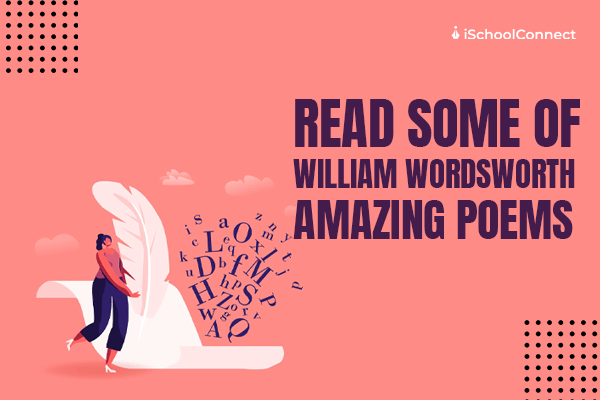 One of the most well-known Romantic poets, Wordsworth is regarded as the best poet to have ever lived in Britain. His poems are known for their emotional depth, naturalism, and attention to detail. Let’s uncover some of the best William Wordsworth poems.

William Wordsworth is one of the most celebrated poets in English literary history. He was born on April 7, 1770, when George III was king, and lived until April 23, 1850, during the reign of Queen Victoria. William Wordsworth wrote some of the most memorable poems in all of English literature, including “Intimations of Immortality” and “Lines Composed a Few Miles above Tintern Abbey.” He was one of the pioneers of the Romantic movement, and you cannot overlook his impact on succeeding writers. Let’s get started!

Daffodils is one of Wordsworth’s most famous poems. It’s also one of his most beautiful poems—a lovely depiction of nature and love that expertly blends them into a single sentiment. The poem details his walk through a field where he finds an abundance of daffodils. The line “They flash upon that inward eye/Which is the blissful sunbeam of the soul!” describes how they stand out against their surroundings because the children who had been playing nearby pluck them.

At this moment, Wordsworth becomes inspired by nature—not just these flowers but everything around him. “And yet I know not whether I should blame/Thee for thy purple phrensy,” he writes to those who might feel shame at seeing such beauty in nature instead of religion or some other source—it doesn’t matter where your joy comes from as long as it’s authentic!

A poem based on Wordsworth’s travels through the English countryside, Lines Composed a Few Miles Above Tintern Abbey, is about his relationship with nature and how that relationship has changed over time. In it, he finds himself as a part of nature and directly connected to it. The work reflects on Wordsworth’s spiritual journey, in which he attempts to understand the world around him and his place within it.

It describes an idyllic scene: “The sky was blue, but then there was no sun.” This line emphasizes the calmness of the day and sets up what comes next—a meditation on nature itself. In lines 5-6 (“Heav’n! “this is not mine”), we learn what this poem will be about: not just about one person’s relationship with God but also about how all people relate differently to religion (and those who do not believe at all).

In this context, “friend” means someone who understands you deeply because they have experienced similar things in life; similarly, “lover” refers to both lovers but also friends who care deeply for each other (as opposed to casual acquaintances). The poet uses these words because he wants us as readers to see ourselves reflected in these characters so that we can relate better ourselves.”

I Wandered Lonely as a Cloud

This Wordsworth poem is about his feelings of loneliness and sadness. He describes how he feels in nature, saying he is “lonely as a cloud .”This shows that he feels like an outsider in nature. He also mentions how “sadness was upon me” and notes that “still sad music filled my ear.” These lines mean that the poet was feeling lonely, depressed, and unhappy at this time in his life.

However, the last two lines show some happy moments: “A glow was in the sky; / And I drank in deep delight; / It seemed as if my soul could fly / To heaven from earth with full contentment!” These lines show how his emotions have changed from sadness to happiness as he sees something beautiful in nature (the sunset).

William Wordsworth tells the story of a young girl named Lucy Gray in this poem. She dies early, and the narrator is sad about it. He also says he’s happy to have known her, even though she’s dead now. It makes him feel better to think that he will always be able to visit her grave whenever he wants to remember her.

The narrator says that Lucy was “A lovely child with eyes so bright/ And the hair of flowing gold.” He also says that “her voice was like a murmuring stream,” which shows us that she was friendly and kind-hearted too!

William Wordsworth’s “Nutting” is a poem about a young boy gathering nuts in the woods. The boy has many opportunities to gather nuts, but he chooses to do it with his sister and father because they are happy together. He also enjoys seeing nature’s beauty, whether a flower or an insect. This poem is perfect for children because it represents a carefree time in youth when everything seemed possible and safe.

The poet describes the bustling activity of squirrels gathering food for their families, which gives him ideas about how his own family might use them. “Sister and I / Will have our blissful hour / Gather from each bough / The ripest fruit to eat; / And as we eat our fill / We’ll talk of what we owe.” The narrator then goes on to describe how these things will help him feel closer to his loved ones:

Strange fits of passion have I known

This poem is about the power of love and how it can be good, evil, and dangerous. The poem begins by describing how strange and wild the feeling of love is when it strikes a person, like a bolt from the heavens. It continues to describe this phenomenon through various metaphors, including lightning, fire, floodwater, and a lioness that may devour its prey.

Wordsworth, in this poem, feels so strongly about their feelings that they cannot contain them—they must express them! They want to tell everyone about their passion, risking rejection or embarrassment. The poet says: “Tis not enough for me/To know my heart; I must know all hearts.” In other words, it’s not enough for one person’s feelings alone—everyone has feelings too!

Liked this blog? Read next: Poetic devices | 8 literary devices with examples you must know!

Ans – The most significant contribution William Wordsworth made to romantic poetry was his ability to express perceptions of seeing, observing, and understanding nature and all of its numerous secrets.

Q2. How many poems has William Wordsworth written?

Ans – During his lifetime, William Wordsworth has written 387 poems.

Ans – The key characteristics of Wordsworth’s poetry are: