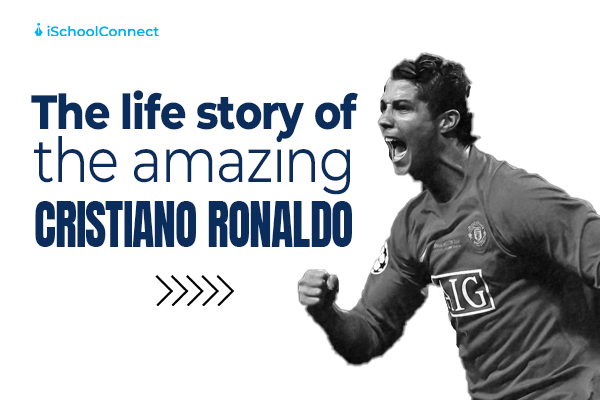 Cristiano Ronaldo is a well-known football figure in the sport. He was born into a low-income family and began playing football at a young age. Continue reading to learn more about this Portuguese footballer.

Dos Santos Cristiano Ronaldo (born February 5, 1985) is a Portuguese professional football player. He is the Portuguese national team captain and plays for the Premier League club Manchester United. He is widely known as one of the best footballers of all time.

Cristiano Ronaldo was born in Portugal on February 5, 1985, to Jose Dinis Aveiro and Maria Dolores dos Santos Aveiro in Funchal, Portugal. Ronaldo has a brother and two sisters and is the youngest of his siblings.

Ronaldo was born into a low-income family and consequently never attended school. He was accused of throwing a chair at one of his school instructors when he was 14 years old, for which he was expelled. Ronaldo has loved football since he was a child and aspired to make a career, so he dropped out of school after being expelled. Ronaldo’s family supported him in his decision to drop out.

His father named him after former US President Ronald Reagan. He mentioned in various interviews that he used to live in a small hamlet with his other brothers, sharing a small room with them.

When Ronaldo told his family he wanted to play football, his mother encouraged him to pursue his dream. Thanks to his mother’s encouragement, Ronaldo is now a terrific football player.

Cristiano’s stamina, tempo, technique, and expertise have gained him international acclaim. He can get past opponents and score various goals, including overhead flick-ons, free kicks, and penalties. He has worked hard to improve his muscular fitness and tactical ability. His talent and popularity combine to make him a formidable opponent.

Cristiano Ronaldo has played for several teams during his career, including Manchester United, Sporting CP, Real Madrid, and Juventus.

His life transformed when Cristiano Ronaldo made his professional debut for Sporting FC in Portugal. Cristiano Ronaldo was promoted to Sporting’s first team at the age of 16 by László Bölöni, who was captivated by his extraordinary dribbling talents and rapid speed. According to Cristiano Ronaldo’s agent, clubs such as Barcelona, Liverpool, and Arsenal manager Arsene Wenger expressed interest in signing the great young Portuguese sensation of Sporting FC in the 2002-2003 season.

In 2003-2004, Cristiano Ronaldo became Manchester United’s first Portuguese player. He requested his Sporting FC number 28, but at Old Trafford, he was assigned the No.7 jersey, which David Beckham and Eric Cantona had previously worn. Cristiano Ronaldo made his Manchester United debut as a substitute for Nicky Butt against Bolton Wonders on August 16, 2003, and United won 4-0. In his first match, Ronaldo earned a standing ovation from the crowd and numerous praises from the United legend George Best. Cristiano Ronaldo’s profession took off in the 2006-07 season when he scored more than 20 goals for Manchester United under Sir Alex Ferguson. He demonstrated his value on the field by assisting the team in winning their first Premier League title in four years.

Cristiano departed Real Madrid in 2018 for Juventus for a fee of €100 million plus €12 million in additional expenditures. Ronaldo agreed to a four-year contract with Juventus, and the cost paid by the new team was the highest ever paid for a 30-year-old player. In his fourth game for Juventus, Ronaldo scored his first goal against Sassuolo, and he was sent off for the first time in his 154th Champions League encounter against Valencia.

Q1. How has Ronaldo demonstrated resilience?

Answer: He successfully combines his business and personal lives and is seen as inspiring by many. He demonstrates his resilience by quickly recovering from adversity and giving his all at all times.

Q2. When does Ronaldo go to bed?

Answer: Cristiano Ronaldo then takes one of his trademark naps till midnight, after which he rests for a few minutes. This relaxing time is followed by a nap beginning at 3 a.m. before getting up for the day.

Q3 What can we learn from Ronaldo?

Dedication is quite essential. Ronaldo is one of the most dedicated players since he never misses a training session and always gives his all on the field. Ronaldo takes his training sessions seriously to push himself to his limits. He is not afraid of hard work.