>  Blog  >  Others   >   Difference between aerospace engineering and aviation 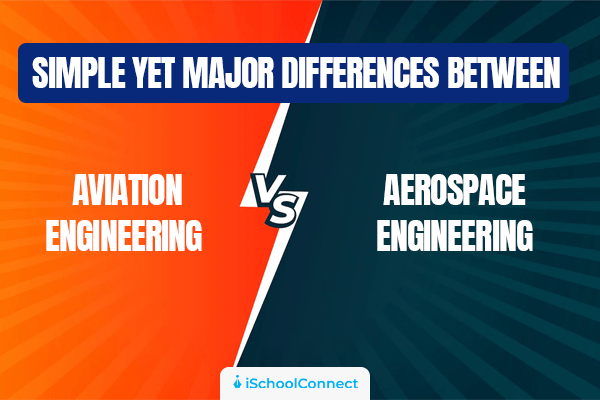 Difference between aerospace engineering and aviation

While Aviation focuses more on aircraft, aerospace is more interested in spacecraft or rockets that travel outside the Earth’s atmosphere. Read on to know more about the difference between aviation and aerospace engineering.

The term ‘aviation’ refers to a variety of pursuits involving aircraft and mechanical flight. The Latin word ‘avis,’ which means ‘bird,’ is where the word ‘aviation’ originates. Everything involving aircraft in the Earth’s atmosphere is referred to as aviation. Aviation is the general term for the use of aircraft for either/both commercial and/or military purposes.

A significant and intricate sector of our global economy is aviation. The Wright brothers achieved powered and controlled flight for the first time in 1903 when they successfully flew their flyer a distance of about 37 meters.

The establishment of the international aviation industry came with the signing of the Paris Convention in 1919.

Aeronautics and space travel are the two words that gave rise to the term aerospace. Aerospace is the engineering and science of flying in Earth’s atmosphere and outer space. It is a technological crown jewel that integrates a lot of the most cutting-edge engineering and scientific knowledge available today.

Perhaps the pinnacle of technological icons for our civilization are aircraft and spacecraft. Since they were able to imagine other planets, humans have fantasized about flying and exploring space. That was made possible by aerospace engineering, making those fantasies a reality.

Aerospace is a diverse field covering two main areas: aeronautical and astronautical engineering. In practical terms, the aerospace industry deals with designing, manufacturing, and maintaining aircraft or spacecraft. It also includes a wide variety of other services, such as maintenance, repair, and overhaul of aircraft and satellite services for the space sector.

Read more: Aerospace Engineering | Here are the top 10 colleges for you!

Differences between Aerospace and Aviation

Aerospace and aviation engineers have the same goal: designing, building, and testing aircraft. Both engineering fields require you to learn about aerodynamics and how an aircraft works to design a new model that flies efficiently.

We hope you enjoyed reading this blog! If so, please share your views in the comments below. Click here to reach out to us for more information. We would be happy to assist you with your queries.

Q1. Are Aviation and Aeronautical the same?

Answer – Although the terms’ aeronautics’ and ‘aviation”‘ are occasionally used synonymously, ‘aeronautics’ technically includes ballistic vehicles and lighter-than-air craft like airships while ‘aviation’ does not.

Q2. Which is better, an aerospace engineer or a pilot?

Answer – It depends on your desire and passions as both are preferred career choices. If you enjoy working with aircraft, are interested in learning how they operate and want to build one, aerospace engineering is the field for you. If you have a strong desire to fly, are in good physical and mental health, and can think clearly under pressure, you might consider becoming a pilot.

Q3. Which country is the top in Aviation engineering?

Answer – The United States is the country most recommended for studying Aviation engineering, with about one-third of universities in that field.