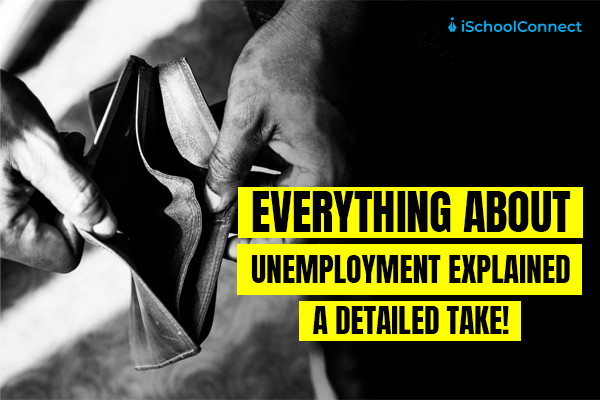 The unemployment rate in India

Only in the long run is a major reduction in income and wealth disparity possible. The normal instrument that can induce a change in inequality is an economy’s employment structure.

Since governments operate within administrative and fiscal constraints, target group programs typically have a minor impact on income redistribution. Labor income allows resources to move across economic classes as well as social and ethnic groups. Income flows across locales are influenced by both accessible assets and other methods of establishing job possibilities.

The National Sample Survey Organisation (NSSO) defines employment and unemployment based on an individual’s activity status as follows:

Different types of unemployment in India

Disguised unemployment: It is a phenomenon in which more individuals work than are required.  It essentially started in India’s agricultural and unorganized sectors.

Seasonal unemployment: It is when people are out of work during certain times. Agricultural laborers in India rarely worked all year.

Structural unemployment: This type caused by a mismatch between the jobs offered in the market and the abilities of the available employees. Many people in India are unemployed because they lack the necessary skills, and training them is difficult due to a lack of knowledge.

Technological unemployment: It is losing jobs caused by technological advancements. According to World Bank data from 2016, the proportion of jobs threatened by automation in India is 69% yearly.

Frictional Unemployment: This is also known as Search Unemployment, is the time lag between jobs while an individual is looking for a new job or moving appointments.

In other words, an employee needs time to look for a new job or to transition from one position to another; this inevitable time lag generates frictional or voluntary unemployment because it is not caused by a lack of jobs but rather by workers quitting their positions in search of better opportunities.

Vulnerable Employment: People who work informally, without proper job contracts, and hence without legal protection. These people are termed as”unemployed” since no records of their jobs are kept.

Read more: Here are the top four causes and effects of overpopulation

The National Sample Survey Office (NSSO), is an organization under the Ministry of Statistics and Programme Implementation (MoSPI) institution, measures unemployment in India using the following methods:

Usual Status Approach: This approach counts unemployed individuals out of work for a significant period in the 365 days before the survey date.

Weekly Status Approach: This method records just those people who were unemployed for at least an hour on any complete day of the week before the survey date.

The Daily Status Approach: In this approach, a person’s status is measured for each day in a reference week. It is explained as someone who does not do gainful work, even for one hour per day.

Unemployment figures (based on the most recent CMIE data)

The reason behind unemployment

Working population with little or no academic levels and vocational skills. Inadequate state support, regulatory difficulties, and a lack of infrastructural, financial, and market links to tiny or cottage industries or small businesses render such operations unviable due to the cost and compliance overruns.

Due to a lack of requisite education or skills, a large workforce is linked with the informal sector, which is not included in any employment data. Domestic assistance, 3/6 construction workers, and so on.

Schools and universities’ curricula are not in line with industry requirements. This is the primary reason for structural unemployment. Inadequate infrastructure growth and low investment in the manufacturing sector limit secondary sector job possibilities.

Liked this blog? Read next: Gender equality- the need for change

Q1 What is the unemployment rate in India?

Q2. What is the main problem of unemployment in India?

Answer: The major causes of unemployment in India are as mentioned below: Large population. Lack of vocational skills or low educational levels of the working population. Labor-intensive sectors suffering from the slowdown in private investment, particularly after demonetization.

Q3. What is the solution to unemployment?

Answer: Education should be improved. To combat unemployment, it is critical to raise people’s educational levels so that they can find work more easily. To achieve effective educational progress, this education should begin early in school, and teachers should pay great attention to and care for each kid.