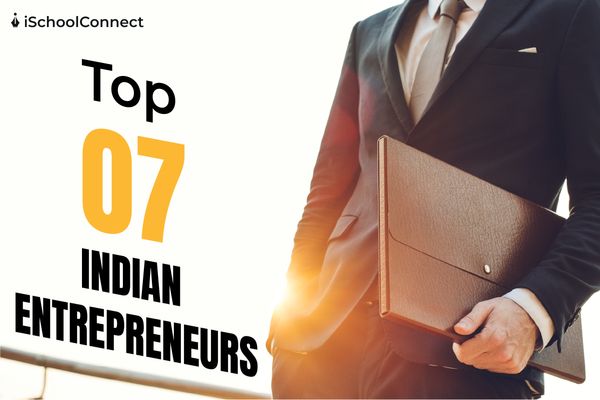 7 Indian entrepreneurs you need to know about

Entrepreneurs are all the buzz these days. More and more people are drifting towards starting their own ventures rather than working 9-5 jobs. Check out this list of 7 young Indian entrepreneurs and know why people want to follow in their footsteps!

Over the past two decades, India has seen a massive growth in startups. A big populace and the need to keep up with the modern world have opened up opportunities for leaders across all sectors. As a result, Indian entrepreneurs have made their mark globally. Even a global pandemic could not stop the growth of startups like Nykaa, Unacademy, Byju’s, and Zomato. The list of young entrepreneurs working to provide solutions to modern-day problems is growing day by day. We have compiled a list of 7 modern-day Indian entrepreneurs that have completely transformed the Indian market.

Ritesh Agrawal is the founder of OYO, which was established in 2015. He was an engineering aspirant who went to study in Kota. Ritesh is also an avid traveler. On his trips, he observed that the majority of places he stayed at charged too much and provided sub-par facilities. He realized that many hotels in India could not fulfill the needs of a budget traveler, which led to his first venture Oravel.

Oravel began in 2012 and was later relaunched as OYO (which stands for ‘On Your Own’). As a result, Ritesh went on to become the world’s youngest CEO at 17. He is also the first Asian to win the ’20 under 20′ Thiel Fellowship and has become one of the most revered Indian entrepreneurs through OYO.

Falguni Nayar belongs to a business-oriented Gujarati family in Mumbai. She is an MBA graduate from IIM Ahmedabad and has worked for Kotak Mahindra Bank for 19 years, where she even rose to the post of MD! At the age of 50, Falguni quit her job and started her entrepreneurial journey. She launched a multi-brand beauty and cosmetics e-commerce platform called Nykaa, which went on to become a huge success.

Nykaa has expanded into 17 stores across India and recorded a revenue of $18.6 billion rupees for the last fiscal year. Falguni Nayar has also been the recipient of awards like the Vogue Beauty Game Changer in 2017 and the BW Disrupt Women Entrepreneur Award in 2019.

Kunal Shah is undoubtedly one of the most popular names in the game. His tweets have become wall arts in offices around the country. He has a bachelor’s degree in Philosophy from Wilson College and briefly pursued MBA from the Narsee Monjee Institute of Management Studies before dropping out.

Kunal went on to create startups with unique missions and business models. His first company was Paisaback, which provided cashback promotions for organized retailers. Kunal then partnered with Sandeep Tandon to form one of India’s most innovative business models – Freecharge. He then sold Freecharge to Snapdeal in 2015 for $400 million. His second venture – CRED has been gaining a lot of popularity and aims to incentivize good financial behavior.

Bhavish Aggarwal and Ankit Bhati graduated from the prestigious IIT-Bombay. Together, they co-founded the most popular online cab service in India – Ola cabs. When they began in 2010, Ola cabs provided services only in Mumbai as well as for outstation services from Mumbai.

After receiving a series of major fundings from various firms, Ola entered the Australian market in January 2018. They also began servicing in New Zealand during the same year, as well as the UK in March 2019. Today, Bhavish and Ankit are the country’s youngest billionaires.

Shradha Sharma is the founder of the online portal YourStory. She had a celebrated career at two famous news media houses – Times of India and CNBC (Mumbai) before launching her startup. While working for these companies, Shradha noticed no one was publishing stories about entrepreneurs and budding businesses. This is when Shradha decided to create YourStory – a platform that tells entrepreneurial stories of success.

From its inception in 2008, YourStory and has promoted over 70,000 stories of entrepreneurs and business people. Shradha currently has a team of more than 100 people, who share content in 11 Indian languages. She is also the recipient of the L’Oreal Paris Femina Award and is also part of the World’s Top 500 LinkedIn influencers.

Vijay Shekhar Sharma has been an achiever from a young age. He graduated as an engineer when he was only 19! During his college days, Vijay started a website called indiasite.net which he later sold for USD $1 million. In 2001, he established the company behind Paytm called One97. PayTM grew into a mass success after Vijay received funding from SAP as well as Ratan Tata. And gradually, it became the cornerstone of digitized payments in India.

PayTM gave Indians access to a mobile wallet, the facility of making payments via QR Codes, simplified bill payments, bookings, gold, mutual funds, and a lot more. It also received the Outstanding Startup of the Year at the Forbes Leadership Awards 2016. In 2017, Vijay became the youngest billionaire in India and currently has a net worth of USD $2.3 billion.

Deepinder Goyal is an IIT graduate who started his career as a Senior Associate Consultant for Bain and Company. He became an entrepreneur by building a food delivery website called foodlet.in, which later became foodiebay.com. His venture began operating in Delhi. Deepinder then went on to partner with Pankaj Chaddah to build the business.

Foodiebay.com soon became Zomato.com and had around 2.5 million website visitors in 2012. Zomato then received substantial funding from Ant Financials, which is Alibaba’s payment affiliate. Today, Zomato is the biggest name in the food tech industry and has revolutionized the food delivery aspect in India.

There is no doubt that Indians have taken the lead when it comes to new disruptive ideas. This list of Indian entrepreneurs is exhaustive. And there are so many more people out there who have great ideas and are trying to make it big. With so many great startups, the opportunities for young minds to showcase their talents and ideas have certainly increased. Even kids are beginning to take their shot at entrepreneurship and proving to be successful.

Some recent successes include Aayushman Sinha of REPRESENT, Tilak Mehta of Papers and Parcels, King Sidharth of Friends, Kavita Shukla of Fresh Papers, and many more.

Aditi Sharma
Study Abroad Expert
`
14 thought of the day quotes to start your day right! 7 great scientists who will inspire you to pursue a career in science