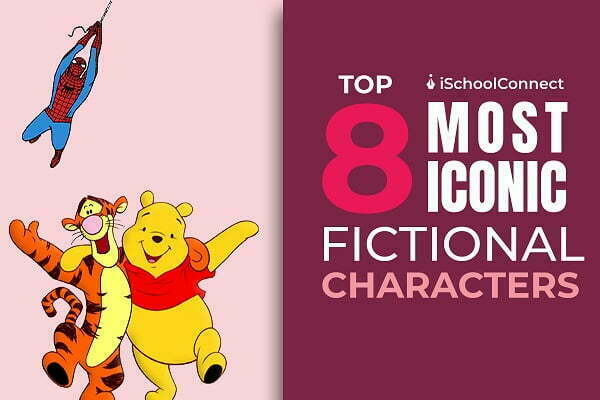 Top 8 most iconic fictional characters of all time

Real-life has been inspiring literature for the longest time. From movie characters to classic novels and even video games, some fictional characters have stood out and changed the way we see the world. Since so many of us related to them, these personas have not only influenced entire generations but also brought people together. They have also taught us to perceive the world a bit differently through their stories.

Listed below are 8 of the most iconic fictional characters.

Batman is one of the most iconic fictional characters to have ever been created. Part of the DC Comics universe, the character debuted in March 1939.

Batman is the alias of Bruce Wayne, who is a wealthy philanthropist and industrialist living on the outskirts of Gotham City. After witnessing the murder of his parents as a child, Bruce swears vengeance against criminals. He devotes himself to learning science, training himself physically, and creating a bat-inspired persona to fight crime in Gotham City.

While he is open to violence and torture, Batman never really kills anybody unless it is absolutely necessary. He has the traits of an anti-hero. With his frightening getup, brooding personality, and alienated behavior, he is regarded as a vigilante by the authorities. Batman’s character has depth and is complex and human, which makes him easy to relate to.

Superman was born on the fictional planet Krypton when his parents sent him to Earth on a small spaceship as a baby. He was adopted by farmers Martha and Jonathan Kent, who named him Clark Kent.

Clark grows up to develop superhuman abilities, which he uses to fight crime. He creates an alias – “Superman” – to keep his personal life separate. Clark lives in the American city of Metropolis and works as a journalist for the Daily Planet.

Frodo Baggins is a fictional character (and lead protagonist) from the immensely popular Lord of the Rings fantasy novel. He is a Hobbit, which is a race of human-like people with extremely small stature. Although considered weak and incapable, he takes on himself the important task of destroying the One Ring (a powerful tool of the series’ main antagonist).

Although the story of the Lord of the Rings involves a large cast of characters that help defeat the ultimate enemy, Frodo Baggins has the most important job of all, which is to destroy the Ring. He does not give up even when his body can no longer move from exhaustion, and although he faces temptations, he stays on the path he set out.

Frodo Baggins is an inspiration to all those who are attempting tasks in their life that can seem unbearably difficult. He teaches us to keep persevering till the end.

Sherlock Holmes is a fictional detective that was created by Sir Arthur Conan Doyle. He is known for his observation and deduction skills, which he uses to investigate cases for a wide variety of clients. The character of Sherlock first appeared in print in 1887’s A Study in Scarlet, which soon turned into a collection of short stories in various magazines.

Set in Victorian and Edwardian London, Holmes caters to a variety of clients – from the most powerful monarchs and governments of Europe to impoverished pawnbrokers and governesses. As a result, Sherlock Holmes builds an immense practice by the year 1895, when the King of Bohemia visits him for help. The President of France awards him the Legion of Honor for capturing an assassin, and he also aids the Vatican twice.

Elizabeth Bennet from Pride and Prejudice is one of the most beloved female fictional characters in literature. Written by Jane Austen, Pride and Prejudice is set in the late 1700s to early 1800s rural Britain. Elizabeth is the second daughter of five and contends with hypocrisy, inconsistency, and nonsense throughout the novel.

She is the second daughter of her parents and, as per the conventions of that time, is expected to be married off for the sake of her family’s future. However, she decides that she wants to become a writer and will only marry someone she loves.

While this is normal today, at the time, it was an audacious, inspiring message. Her charm and ability to see things with a critical mind, as well as her penchant for laughter, make her one of the most enjoyable fictional characters to read and follow. Another of her important inspirational traits is her ability to self-reflect, acknowledge and correct her faults.

He is part of Marvel Comics and has appeared in American comic books, movies, TV shows, and even video games. Spider-Man is the alias of Peter Parker, who lives with his Aunt May and Uncle Ben in New York City. His parents died in a plane crash, and Peter also deals with the struggles of adolescence as well as financial issues.

Peter is a high school student with real-life problems. His life changes when he is bitten by a radioactive spider which causes him to develop superhuman strength, speed, agility, reflexes, and his “spider-sense.” Using his splendid scientific acumen, Peter builds web-shooters as well as his costume and creates his alias, Spider-Man. Spider-Man, unlike the prevailing superheroes, did not use his powers for the greater good at first. However, after the murder of his Uncle Ben, the character develops greater depth.

This trio needs no introduction. Based on a fictional version of Great Britain where magic and magic users are common, Harry, Hermione, and Ron are instrumental in taking down the Dark Lord in the Harry Potter series of books and films. The trio is also a prime example of teamwork and loyalty. They work well together and know each other’s strengths and weaknesses.

Harry, Ron, and Hermione are often the ones who drive not only the story plot but also grow up from being children following the elders to leading the battle against dark forces. Bravery in the face of your fears, accepting your weaknesses, striving to do good against evil, and taking care of the weak are some of the most inspiring traits these fictional characters have taught us.

“Thank you, Mario, but our princess is in another castle” is still one of the iconic quotes from the game. Mario, who debuted as a fictional video game character in Super Mario Bros., remains relevant more than 40 years after his introduction. The character is a mustachioed plumber with a red cap; he became so renowned that it became an unofficial mascot of Nintendo.

Super Mario Bros. was first introduced in Japan in 1985 and later in North America. It became one of the most popular video games of all time, selling over 40 million copies of the original Nintendo Entertainment System. As of today, Mario has more than 200 video games to his name and an upcoming star-studded movie in 2022!

We bet this list of famous book characters has at least one such name that sparks your eyes!

We get attached, inspired, and love these characters because we see the worst and the best parts of humanity in them. Whether it is our wish to be independent or our strong desire to be compassionate for the less fortunate, great fictional characters shine a spotlight on traits and abilities we all wish we had.

But it doesn’t need to stop there; inspiration is only the beginning. Think about your own favorite fictional characters and emulate their values and behaviors in your real life. This can be of great help to keep you motivated when you are down and facing adversity.

Check out our blog for more such content! Tell us in the comments below – What fictional character do you admire the most?

Liked this blog? Read next: 7 Ruskin Bond books you need to read

Q1. Who is the most influential fictional character of all time?

Answer- Apart from those in the blog, some of the most influential fictional characters are-

Answer- Realistic fiction takes elements/situations from the real work that is built into the fiction world to represent problems in society.

Q3. Who was the first fictional character?

Answer- The first record of a non-mythological fictional character is  Aristophanes’ The Acharnians (425 B.C.).

Q4. Why do we look up to fictional characters?

Answer- The line between fiction & reality is blurrier than ever before. Although the lives of fictional characters are pre-written by the authors, the characters are often displayed as free agents, controllers of their fate, and as humans, freedom is something that we all admire. It is what the characters represent that matters. When Lois Lane asks about the ‘S’ in Superman, he replies that in his world, the S stands for ‘hope,’ and if Morgan Freeman has taught us anything, it’s that “Hope is a good thing!”

Q5. Who is the most iconic Disney character?

Answer- Mickey Mouse can be called one of the iconic and most-loved Disney characters.