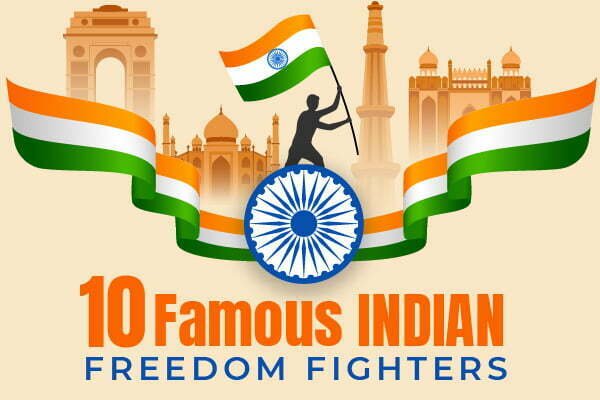 10 Greatest Freedom fighters you should know about

A large number of revolutionaries and activists from varied family backgrounds came together and embarked on a mission to overturn foreign colonial powers’ dominance over India. While we acknowledge some of them, many of these unsung leaders remain unknown.

Along with playing a critical role in the country’s independence, these freedom fighters left behind a legacy of bravery, resolve, and unwavering patriotism.

Despite not being with us anymore, they continue to inspire millions to fight and preserve our freedom.

We have listed down the most prominent freedom fighters in India along with their contributions to the nation.

Because of his remarkable efforts, Mohandas Karamchand Gandhi is known as the ‘Father of the Nation’ and ‘Mahatma Gandhi’. Born on the 2nd of October, 1869, he married Kasturba when he was 13, studied law in London, and then traveled to South Africa for practice. South Africa is where he was inspired to fight for human rights after witnessing racial injustice against some Indians. After witnessing India’s condition under British rule, Gandhi became a fervent supporter of the independence movement. He protested against the salt taxes and led various nonviolent anti-British campaigns in his quest for independence.  The non-cooperation movement and the Quit India movement were some of the most significant movements taken up by Mahatma Gandhi.

Subhas Chandra Bose was, without a doubt, one of the greatest Indian freedom fighters in history. He was born on January 23rd, 1897. From the early 1920s till the end of 1930, he was the leader of the radical wing of Congress.

He established the Indian National Army (INA) with Japanese assistance. Despite his formal cause of death being attributed to an Aircraft accident in 1945, speculations about it being a cover-up or a complete fabrication persist to this day.

Bhagat Singh, born in 1907, was born into a Sikh family in Punjab’s undivided state and held firmly to his values of patriotism till his death.

He was one of India’s most radical revolutionaries. Singh was contentious but a well-respected figure in India’s quest for freedom.

Bhagat, along with Batukeshwar Dutt, bombed the Central Legislative Assembly in Delhi on April 8, 1929. A death penalty for Bhagat and life imprisonment for Dutt thereafter. Singh was only 23 to achieve so much as a front-line warrior fighting for India’s independence. The history is incomplete without the name and sacrifice of Bhagat Singh.

Sardar Vallabhbhai Patel, born in 1875, gained the title of ‘Sardar’ due to his heroic effort in the Bardoli Satyagrah. He has been a fearless individual from an early age. The title “iron man of India” was declared because of his willpower and determination for the country. Sardar Patel began his career as a lawyer, but he left the profession to fight for India’s independence from British domination. Following India’s independence, he became the country’s Deputy Prime Minister and committed himself to uniting the nation, a task he completed successfully

Jawaharlal Nehru, born in 1889, was the only son of Motilal Nehru and Swarup Rani. Nehru began his career as an attorney before becoming well-known as an Indian independence fighter and politician. Mahatma Gandhi’s attempts to free India from Britishers influenced his determination for India’s independence.

He became involved in the liberation struggle, rising to the position of President of the Indian National Congress before becoming India’s first Prime Minister after independence. His nickname was Nehru Chacha because he loved children so much that his birthday is declared as Children’s Day.

Tilak was an outstanding Indian freedom fighter, born in 1856. Bal Gangadhar Tilak initiated the slogan – “Swaraj is my birthright.” He was known as one of the Lal, Bal, and Pal triad. Tilak started schools and published periodicals to resist the British rulers.

Lala Lajpat Rai, also known as Punjab Kesari, was born in Punjab in 1865. Rai was one of the Indian National Congress’s radical members and was a member of the Lal-Bal-Pal trio. He rose to prominence after leading the Non-Cooperation Movement and the Punjab Protest against the Jalliawala Bagh event in 1920. The Britishers, in a Lathi charge, killed him during a Simon Commission demonstration in 1928.

Rani Laxmibai, the queen of the princely state of Jhansi in North India, became a symbol of women’s resistance throughout India’s independence struggle. Her name was ‘Manikarnika’ when she was born in Kashi in 1828. She married Gangadhar Rao, the King of Jhansi when she was just 12 years old. Following her husband’s death, Rani Laxmibai assumed control of the state’s government. She made it obvious to the British that she would not submit to their authority. For seven days, she heroically defended her region with a little army. She battled the British valiantly till killed in Gwalior in 1858.

Mahadevi Verma, a Hindi poet, freedom fighter, and educationist, was born in Allahabad in 1907 to a progressive Hindu family. She was the principal and then the vice-chancellor of Allahabad’s Prayag Mahila Vidyapeeth, a women’s residential institution contributing significantly to women’s education. Mahadevi Verma, did not participate in political activity. There is a frequent comparison as she is fond of Bhakti Saint Mirabai of the 16th century.

Basanti Devi, born on the 23rd March 1880, became involved in the independence struggle when her husband, Chittaranjan Das, was arrested. Being one of the most prominent woman freedom fighters, she was a part of the Khilafat movement and civil disobedience campaign. She was also a founder member of the Nari Karma Mandira, a women’s educational center.

She was in prison for a brief time in Kolkata for selling Khadi. Her arrest sparked indignation and resentment across the country. She took over the weekly magazine Bangalar Katha when her husband died.

She was the President of the Bengal Provincial Congress with a Padma Vibhushan award in 1973.

India’s freedom has been possible due to the contributions of multiple freedom fighters who might not be on our list, but that still doesn’t mean that their contributions have been any less.

Since India’s independence some seven decades ago, the country has evolved at a quicker rate, the roots of which exist in the efforts taken by the freedom fighters. The country is developing economically and socially, and it is on the road to progress. This progress would be incomplete without the foundational steps taken by India’s pioneers of freedom.

Liked this blog? Read next: Babasaheb Ambedkar | Some amazing facts about the life of the great man

Q1. Who are some other female freedom fighters?

Answer – Some of the Indian female freedom fighters are as follows –

Q2. Who is the fire girl of Bengal?

Answer – Bina Das (24 August 1911—1986) an Indian revolutionary and nationalist from West Bengal is the fire girl of Bengal.