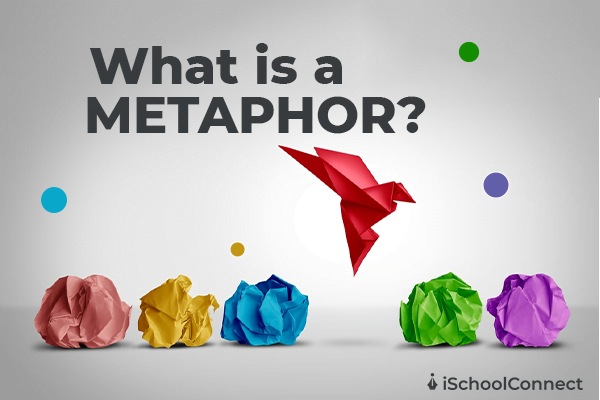 Are you planning to write a short story or a poem and want to make it more interesting? Here is a comprehensive article on metaphors with examples and how to use them correctly in your story.

English is a global language, and almost every country has made it mandatory in their school to learn it as a first language. If you plan to pursue a degree in English literature, want to become a writer/journalist, or improve your writing skills, knowledge about metaphors can help you go a notch higher. This article will delve into what a metaphor is and some good metaphors with examples.

What is a metaphor?

In the English language, a metaphor is a part of figures of speech. It helps describe an action, though not true, by giving an idea or striking comparison to explain it better when words fail to describe it.

What is a figure of speech?

Concepts of metaphors that you should know of!

Coming to metaphors with examples, we need to understand that there are a few basic concepts associated with them-

Read More: Direct and Indirect Speech | A complete guide to the English language

When you are using metaphor examples in sentences, there are three rules or guidelines you need to follow without ruining the meaning of the context-

1. It must ring true

You need to use the right tools in the right places in a sentence without being over-dramatic or drawing attention away from the actual context. It needs to be accurate and spot on. For example, if someone is in the habit of saying hurtful things, we usually say, ‘your words cut deeper than a knife.’

2. Don’t use metaphors that weaken a sentence

You should not pick a metaphor just for the sake of it. Always use it in a suitable tense. Only use it when it adds value to the sentence. For example, ‘her skin hummed against her bones’ is much better than ‘her skin seemed to be humming against her bones.’

3. Carefully use the metaphor

No matter how much you like writing or speaking in metaphors, using too many in a paragraph or in one page will take away the immediacy of the prose and make it sound or appear too forced.

Types of metaphors with examples

Broadly, there are four types of metaphors. Some of the metaphor types are as follows-

An implied metaphor departs from thing A to thing B and enables one to make a more subtle comparison employing implication.
Example: Jordan got his courtship cues from the peacock. In a room full of ladies, Jordan simply fans his feathers.
By comparing Jordan to a peacock, the writer is trying to imply that Jordan is trying to get ladies’ attention by being flirty or showy.

As the name suggests, a sustained metaphor is sustained through numerous sentences or a large chunk of paragraphs without being overly dramatic. It requires a certain level of literary skill, and since it develops slowly over a big chunk of text, it can prove to be a powerful literary tool. The outcome will be vivid imagery in the person’s mind going through the text.
Example: ‘’But soft! What light through yonder window breaks? It is the East, and Juliet is the sun! Arise, fair sun, and kill the envious moon, who is already sick and pale with grief.’’
(Romeo and Juliet by William Shakespeare)

A dead metaphor refers to those metaphors that have been done to death in the English language. These include commonplace phrases like ‘heart of gold, ‘raining cats and dogs’, etc.
However, if they are too much in use in a piece of writing, the reader will eventually lose interest. To hold on to the interest of your audience, you will need to come up with the usage of the metaphor, even if it’s highly common, in a unique way.

As the term suggests, a mixed metaphor is a mixture of two completely unrelated metaphors.
A mixed metaphor should ideally be used if you are trying to be funny in a sentence or a context. If that is not your intention, a mixed metaphor can completely dampen the reader’s interest levels.
Examples: ‘’I smell a rat. I see him floating in the air. But mark me, sir, I will nip him in the bud”.
If you want to get a better idea of how to use mixed metaphors in a literary piece, the works of the British humorist P.G. Wodehouse is a perfect example, who is known as a master of intentionally using these metaphors in the English language.

Now that we have spoken extensively about what a metaphor is, the rules of application for using a metaphor, and its various types, let us look at some great metaphor examples in literature.

That’s all for now! If you have any more questions about which program to choose, you can drop a comment below on reach out to us.

Liked this blog? then read 15 Figures of speech examples and how to use them!

Q1. In which discipline can I use metaphor?

Answer: Students of literature, linguistics, and rhetoric need to be aware of figures of speech. In some cases, they have greater emphasis when pursuing a bachelor’s or master’s degree. Generally, metaphors are abundant in literary books, poetry, songs, speeches, journalistic pieces, etc.

Q2. What is the difference between simile and metaphor, with examples?

Answer: Both simile and metaphor compare something with something else. The only difference between the two is that a simile uses the words ‘like’ or ‘as’ at the time of the comparison, whereas a metaphor will go directly into the comparison.
Simile examples: As cool as cucumber/life is like a box of chocolates/ brave as a lion/ he is strong as an ox
Metaphor example: Love is a battlefield

Q3. What are some common and easy-to-use metaphor examples in everyday language?

Answer: Metaphors are a fun figure of speech and are extremely addictive when it comes to the intention and outcome of the application. Some common metaphor examples that you can use like a pro in your everyday communication are-