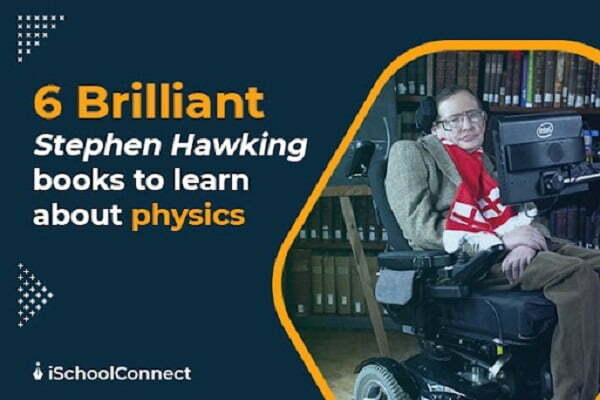 From the big bang theory to black holes, Stephen Hawking's contribution to his field is extensive. Stephen Hawking's books are detailed with his findings regarding the structure of our universe. They are written in a manner that appeals to every reader.

Who was Stephen Hawking?

Theoretical physicist Stephen Hawking was a quick-witted man with a sharp sense of humor, making him quite popular. Once a curious child, he grew into an intelligent man who never lost his sense of wonder. ASL diagnosis at the age of 21 changed his life forever but did not take away his zest for life. We know this because he had an incredibly loud mind that authored many books and published many papers.

He once said, “Nothing is better than reading and gaining more and more knowledge.” So, here are the six must-have Stephen Hawking books for you –

1. A Brief History of Time

Stephen Hawking’s book “A Brief History of Time” is your best bet, to begin with. As it has reportedly sold over 9 million copies worldwide and has been translated into about 40 languages. It is the definition of a bestseller.

“A Brief History of Time” is full of analysis and the sort of concepts that could persuade you to open yourself up to other possibilities. It was published in 1988, and a fair amount of progress has been made since then, which Mr. Hawking has made sure to include in updated chapters.

Imagine the universe as a superhero in a Marvel movie and you want to know its origin story. And, one book by Stephen Hawking is that script. Together, in “The Grand Design,” Stephen Hawking and Leonard Mlodinow have answered all the curious questions a fan might have about life on this planet and the universe at large.

The book focuses on, amongst other things, M-theory, i.e., a theory that talks about a universe with eleven dimensions and where weak and strong forces along with gravity are unified.

3. Brief Answers to the Big Questions

Rather than touching the kind of man he was, Stephen Hawking’s last book, “Brief Answers to the Big Questions“, dispelled any of the doubts anyone might have about the curiosity this one mind could hold. The description of the book is in the title itself.

How did the universe come into existence? Are there other life forms out there? What is inside a black hole? These are big questions, and while he has addressed them in elaborate detail in his other books, this piece has, as the title suggests, extracted the speculations and explanations in relatively concise answers.

4. The Universe in a Nutshell

This book is considered the sequel to “A Brief History in Time“. Through this illustrated book, he explains the advancements made in the years that have gone by since then. He attempts to bring together Richard Feynman’s idea of multiple histories and Albert Einstein’s General Theory of Relativity to explain how the universe works.

5. The Theory of Everything

The title of this book immediately brings to mind the 2014 biographical drama film. It was about Stephen Hawking, played by Eddie Redmayne. The book, however, is a compilation of notes from his lectures at Cambridge University.

He discusses the history and evolution of cosmological study, the big bang, black holes, the origin and fate of the universe, quantum gravity, the concept of time, time travel, and one unified ‘Theory of Everything.’

While it seems like Stephen Hawking’s book “The Theory of Everything“ is too much to take in; his language is reasonably approachable and sprinkled with his wit and humor, making it an enjoyable read.

Of all the books written by Stephen Hawking, “My Brief History” is the only autobiography of a solo venture. He does not have a co-author on this book, and it is a first-hand account of Stephen Hawking, the individual.

He talks about his boyhood and his family live but doesn’t dwell too long on the parts of his personal life. Instead, he talks about what he dedicated his life to, which is finding the secrets of the universe and his scientific research.

The book is peppered with personal photographs as well. “My Brief History,” true to its name, was, in fact, a brief memoir.

It’s time to list the other Stephen Hawking books. You may seek out the editions, should you be more interested after reading this article.

All in all, “George” is a series of illustrated children’s books that Stephen co-authored with Lucy Hawking. All of these books are available almost everywhere. From bookstores to online stores, you can find them in physical paperback/hardback formats, audiobook formats, and ebooks.

Liked this blog? Then read Career quotes | 10 Inspirational ones to help you gain perspective!

1. Why is Stephen Hawking famous?

He was an accomplished theoretical physicist whose work transformed the field. His contributions were exemplary.

2. Which of Stephen Hawking’s books should I read first?

You could begin with A Brief History of Time. His first book features an in-depth explanation of his scientific theories and predictions.

The subject matter can seem intimidating if physics is what you are entirely unaware of. However, some of the concepts are relatively easy to understand. Hawking has done an excellent job of making them accessible for a layman.

Priyasha Purkayastha
Study Abroad Expert
`
Career quotes | 10 Inspirational ones to help you gain perspective Quotes on art and creativity | 60 amazing quotes for you!