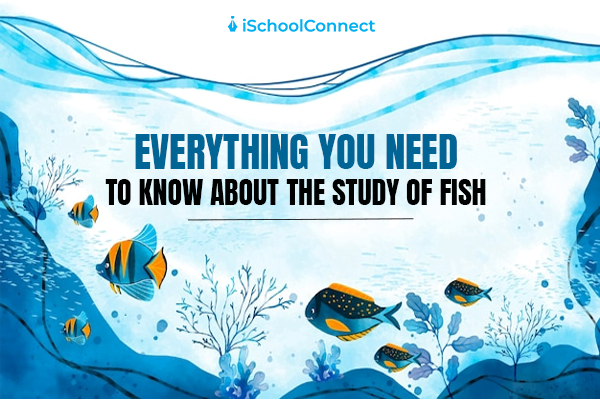 Study of fish- definition, history, applications, and much more

With the help of the study of fish, we can maintain, change, or create new industries, adding to the resources of society. We are also able to shed light on issues related to development, animal distribution, and evolution.

Study of fish deals with comparing various proportional dimensions and looking at the arrangement of elements like counts of fin spines, scales, teeth, and gill rakers. Fishes are classified using the same elements. Males, females, and children frequently have various color patterns because colors play an important role in the study of fish. Fishes residing in different environments or different parts of the geographic range may exhibit variations in color.

Fish taxonomy is being more and more dependent on genetics. With the study of animals’ DNA being compared to that of related species and geographical populations of the same species. In addition to the preserved specimen, frozen muscle tissue samples or fin clips are kept for this purpose.

Definition for the study of fish

The branch of zoology (the study of animals) related to fish is known as ichthyology. It involves the study of fish development, anatomy (structure), physiology (function), behavior, classification, genetics, and ecology. Since fish are a significant source of food for humans, ichthyology research is also economically significant.

History of the study of fish

It is possible to trace the origins of ichthyology as a formal science back to the time when Aristotle created the first categorization of fish. He recorded the anatomical traits and behavior of fish species that set them apart from other marine mammal species.

Modern ichthyology was developed during the European Renaissance, Hippolito Salviani, Pierre Belon, and Guillaume Rondelet were three eminent scholars who made significant contributions during this time. Hippolito Salviani wrote a book called ‘Aquatilium animalium historiae’ which is one of his well-known accomplishments. It included descriptions of hundreds of Mediterranean fish.

French naturalist Pierre Belon wrote on a variety of subjects, including ichthyology, ornithology, botany, comparative anatomy, etc. The ichthyologist and anatomist Guillaume Rondelet made a contribution to the field with his book Libri de piscibus marinis in which true piscium effigies are expressed. In this work, he explored how diverse marine animals differ and carry out their various functions.

Why do we need to study fish?

The management of fisheries, the protection of species, and the preservation of the aquatic environment all depend on an in-depth study of fish variety, distribution, habitat requirements, and life cycles.

However, a lot of fish groups still need to be studied, and a lot of places haven’t been sufficiently explored yet. Many fish larval stages have not been examined and are not well known.

Numerous fish species have yet to be fully characterized. Australia was thought to have 3,600 fish species in 1989; by 2006, that number had increased to 4,500. There are now 300 unidentified species that are recognized by scientists.

Future surveys will lead to the discovery of numerous new and fascinating fish species. Those species investigate the fauna of deep-sea mountains and the continental slope.

Applications of study of fish

The two main fields of study for museum ichthyologists are biogeography and taxonomy. These two field includes categorization and the description of new species.

As a permanent resource for both current and future researchers, large reference collections of preserved specimens are held in museums.

Since fishing is an important industry and fish are a key source of food, a lot of fishery research is carried out in institutional aquariums as well as government facilities.

It is not surprising that a large portion of this research is focused on discovering more about fish diseases and comprehending the impact that pollution has on them.

Fish are just as susceptible to viral infections as higher vertebrates are, and they frequently exhibit disease symptoms early. They are prone to tumors, and ill fish is a warning that their habitat is polluted and can be dangerous for humans as well.

Ichthyologists need to understand a fish’s habitat as well as the fish itself to detect any abnormalities in the environment and, consequently, the fish.

In their fieldwork, ichthyologists can employ acoustics to investigate and monitor various fish species. The air in fish’s swim bladders is the main way fish finders identify their presence.

Fish-specific sonar systems send sound pulses,how long it takes for echoes to return from a target and compute the distance to that target.

Fish movement is tracked and monitored using acoustic fish tags. Each transmitter found on a fish tag emits a distinct sound. A fish that has been marked with a hydrophone can be located and its depth can also be measured.

Did you find this blog informative? If so, please share your thoughts in the comments section below. Click here to contact us for more information on the study of fish. We would be happy to assist you with your queries.

Liked this blog? Read next: Blue revolution: All you need to know

Q1. Who is a well-known ichthyologist?

Ans- Eugenie Clark, an American ichthyologist known for her studies on the behavior of sharks and venomous fish in tropical oceans, was born in New York, on May 4, 1922, and passed away in Sarasota, Florida, on February 25, 2015. She was also a fervent supporter of marine conservation.

Ans- A career in ichthyology entails research of fish, sharks, rays, sawfish, and other aquatic animals.

Q3. Why is the study of fish called ichthyology?

Ans- Ichthyology has its roots in the Greek words ‘ikhthus’, which means ‘fish,’ and the suffix -ology, which means ‘the study of,’ and its history dates back to the stone age when learning about fish meant having something to cook for dinner.

Tags :
Study of fish
WRITTEN BY