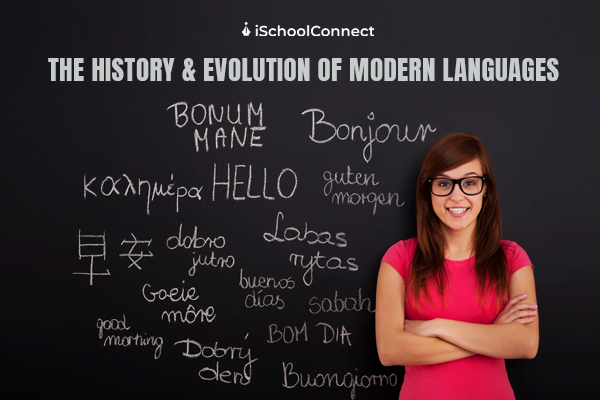 The history of the English languages

English is one of the oldest member of the Indo-European family of languages. Do you know the history of English?

According to linguistic historians, the Proto-Indo-European language was the first English language source. The history of English languages spans three major eras – Old English (450–1100 AD), Middle English (1100–circa 1500 AD), and Modern English (since 1500).

Prior to the Saxons, a variety of Celtic languages were spoken in Britain. After the arrival of the Romans, Britain received Latin from them. Roman soldiers and merchants are credited with coining many of the words that have survived from this time period. Win (wine), candel (candle), and weall  (wall) are some examples. More Latin words became a part of the English language with the arrival of St. Augustine in 597 and the spread of Christianity in Saxon England.

Vikings invaded the country around 878 AD, introducing many Norse words into English, particularly in the country’s north. Sky, egg, cake, skin, leg, window (wind eye), husband, fellow, skill, anger, flat, odd, ugly, get, give, take, raise, call, die, they, their, them are just a few words that have Norse roots. The oldest known heroic epic poem, Beowulf was also written in this era.

The Duke of Normandy, William the Conqueror, invaded and took control of England in 1066. The new conquerors, known as the Normans, brought French with them, which was adopted by the Royal Court, as well as the ruling and upper classes.

In the fourteenth century, English regained its preeminence in Britain. Still, it did so while incorporating a large number of French words, including crown, castle, court, legislature, army, beauty, banquet, art, romance, servant, peasant, traitor, and governor.

The Canterbury Tales by Geoffrey Chaucer is the most well-known example of Middle English. It is a collection of tales about a group of thirty pilgrims who visit Canterbury, England, and it gives us a glimpse into life in medieval England.

Read more: Direct and Indirect Speech | A complete guide to the English language

The renaissance, the industrial revolution, and British colonialism were the three major world events at the start of the Modern English period.

A large portion of the Greek and Latin words that entered English did so during the English Renaissance. The early 16th century to the early 17th century is known as the Elizabethan age” or the age of Shakespeare in English cultural history.

Many idioms and proverbs that William Shakespeare (1564-1616) contributed to the English language are still in common use today. The authorized or king James translation of the Bible was published in 1611, almost at the same time as

The Industrial Revolution began in England in the eighteenth century. As inventors created various products and machinery, new technical terms were added to the vocabulary. The creators of these words either chose a name for them or had these inventions named after themselves (trains, engines, pulleys, combustion, electricity, the telephone, the telegraph, the camera).

Between the 18th and 20th centuries, during the 200 years that Britain was an Empire, the English language underwent significant change as the British Empire expanded into the USA, Australia, New Zealand, India, Asia, and Africa. They sent people to colonize and live in the territories they had conquered, and as these people interacted with the locals, new words were added to the English language.

For instance, the words kangaroo and boomerang are indigenous to Australia’s Aborigine population; juggernaut and turban are of Indian origin, and cotton and coffee are Arabic words.

Old English: Also known as the Middle Fifth to the Middle Eleventh Centuries, was spoken from 450 to 1100 AD.

Modern English: Also known as the late 15th century to the present, dates from 1500 AD.

Modern English: Had influence of many different languages from all over the world.

Old English: There were some silent letters in Old English.

Liked this blog? Read next: 5 English learning books to boost your language skills

Q1. Why does Anglo-Saxon differ from present-day English?

Answer –There were two more foreign invasions in Britain, which is why Anglo-Saxon is different from modern English. The invaders were Normans from Denmark and Normans from Normandy in France. Old English was transformed into Middle English as a result of these invasions.

Q2. Which words were derived from Anglo-Saxon in Modern English?

Answer –The most commonly used words in English, such as the nouns father, mother, food, drink, bed, hunger, all-powerful verbs, and the majority of prepositions and conjunctions, are Anglo-Saxon in origin.

Q3. Why does the vocabulary in English have such a wide range?

Admin iSchoolConnect
Study Abroad Expert
`
Numerous steps to knowing how to plan a birthday party How to join a RAW agency?