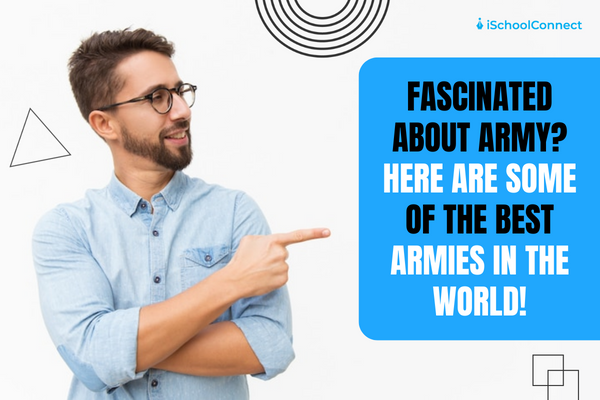 Top 10 army in the world

A country’s army is one of its most valuable assets. A well-equipped defense system is crucial for a country’s safety and security. Keep reading to know more about the top 10 army in the world and how they work.

In these shifting geopolitical times, every nation is trying to modernize its armed forces and enhance itself in comparison to its adversaries. The most prominent example is countries such as Sweden and Finland, which have never been involved in full-fledged conflicts, are now considering joining the NATO alliance. A similar episode is thought to have triggered the ongoing conflict between Ukraine and Russia, which has profoundly altered the world’s status today. In this blog, we will discuss the top 10 army in the world and how they play an important role in guarding their nations.

The Global Firepower Index ranks each country’s military power. The ‘PowerIndex-score’ is based on 50 elements, including the amount and diversity of armament, the availability of natural resources, economic stability, logistics capability, and location. According to a rating of the world’s greatest militaries, The United States has the most powerful military force in the world.

A perfect score of 0.000 on the Global Power Index for a country has yet to be reached. The lower the score value, the stronger the fighting ability, even if only on paper. The GPI does not account for nuclear capability. The ranking is only based on traditional competencies.

Here, we will take a look at top 10 armies in the world in detail

According to Global Firepower figures, Russia has the most tanks in the world, with 12,950, more than double the number of tanks that the United States owns.

On land, about 1 million active personnel command around 27,038 armored vehicles, 6,083 self-propelled artillery groups, and 3,860 rocket projectors. The Russian military budget is expected to reach $48 billion soon, making it one of the most expensive in the world.

Read more: Military scholarships | The ultimate guide to getting a scholarship

It boasts the world’s largest military in terms of overall manpower. It also possesses the third-largest tank and submarine fleets in the world, trailing behind only Russia and the United States.

China’s military modernization efforts have also made significant progress in recent years; ballistic missiles and fifth-generation aircraft are presently being developed, which could change the face of the armed forces in the near future.

It is thought to have the world’s fourth-largest submarine fleet. The Japanese Navy also has four aircraft carriers, however, they are only outfitted with helicopters. Japan also boasts the fourth-largest fleet of attack helicopters in the world, trailing behind only China, Russia, and the United States.

South Korea possesses a large number of submarines, assault helicopters, and active people to deal with such defense systems. This country also has a diverse tank fleet and is the world’s sixth-largest air force.

Despite its small size, the French military is well-trained, professional, and capable of deploying a massive amount of force. With the Charles de Gaulle aircraft carrier and periodic military deployments in Africa to support governments and combat terrorism, France is a key military force acting in such scenarios.

Despite a 20% decrease in the armed force, it still remains one of the world’s top ten most formidable armed forces. They have some of the world’s most powerful weapons. The Royal Navy commissioned the HMS Queen Elizabeth aircraft carrier with a 4.5-acre flight deck. The UK army is capable of transporting 40 F-35B joint strike fighters across the world.

Turkey’s military is one of the most formidable in the eastern Mediterranean. As a result, the country has a sizable tank fleet, as well as a sizable fleet of jets and attack helicopters. Turkey, like any other developing country, is one strong F-35 partner.

Did you find this blog informative? If so, please share your thoughts in the comments section below. Click here to contact us for more information on the top 10 army in the world. We would be happy to assist you with your queries.

Liked this blog? Read next: How to join a RAW agency?

Q1. Which countries have won the most battles?

Ans- Armies that have won most battles are-

Q2. Which country has no army?

Ans- Andorra has no standing army but has signed treaties for security with Spain and France.

Q3. What country has the smallest military?

With a land area of under 0.2 square miles, the tiny sovereign state has the smallest armed force to match.