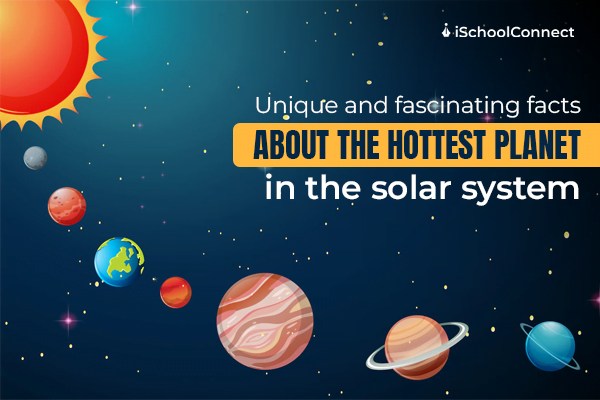 Venus, the hottest planet in our solar system

The shining star of the day, the twin to our planet, and the one named after a goddess, Venus, is an intriguing planetary body. Read on to understand why it is the hottest planet in our solar system and some other interesting facts about it!

Named after the Roman goddess of love and beauty, Venus is the only planet named after a female. It is said that the astronomers of that age named the planet such, because it shone the brightest at the time of discovery, just like the beautiful goddess Venus. i. After the moon, Venus is the brightest object in the night sky as seen from the Earth. Even in bright daylight, Venus is visible to the naked eye. It can also cast shadows. Just before sunrise or for a few hours after sunset, Venus is visible to the naked eye. sometimes you can see Venus even in a completely dark sky. Continue reading about the hottest planet in the solar system

Venus is also called Earth’s sister planet because of the similarity in both their sizes, mass, and composition. Venus is the third smallest planet in the solar system. Although sometimes referred to as Earth’s sister, in certain aspects, it is still s very different from our planet. Venus has the densest atmosphere that consists of at least 96% carbon dioxide.

In the past, Venus may have had water oceans that evaporated over time. After this, the temperature rose, and the planet became extremely hot. This is the runaway greenhouse effect. The water molecules probably were broken down by photons. The free hydrogen might have been directed into interplanetary space due to the lack of a planetary magnetic field. Venus is sometimes referred to as Earth’s evil twin because of how brutal its surface is.

Read more: Cosmology | Let’s get to know more about the stars and moons!

There are 4 terrestrial planets in our solar system. Which means they have a rocky body like the body of the earth. Venus is one of them. The mass of Venus is 81.5% of Earth’s and the diameter is 12,103.6 km. This is 638.4 km less than the diameter of Earth. However, the conditions on Venus and Earth are very different because of their dense atmosphere.

Which is the hottest planet in our solar system?

There are 7 planets in our solar system and they revolve around the Sun. The first and the closest planet to the Sun is Mercury. As it goes from day to night, the planet experiences extremes in its temperature. The heat can go up to 430°C on Mercury, however, Venus remains the hottest planet.

Like Earth, Venus experiences a greenhouse effect. This leads to increased temperatures on the planet. However, the numbers can get way higher than those of the Earth! The surface temperature of Venus is said to be 465°C, making Venus the hottest planet in our solar system.

Fourth in the line, after our home planet, is Mars. Humans have journeyed the most to this body and consequently, know most of it as well. The exploration has reached a level where you can check the temperature on the surface of Mars at any given time of the day. From 30°C to as low as -140°C, the temperature scale on the planet is wide.

Next in line are Jupiter and Saturn. Since these two ice giants don’t have a solid surface, we try to gauge the temperature by studying the pressure levels in these planets’ gases. -108°C of Jupiter and -138°C of Saturn, are the estimates of the temperatures for these bodies.

Last in the order are Uranus and Neptune. They are the farthest from the celestial energy source of the Sun. Due to the distance and difficulty of space missions, we have the least amount of information on these planets. The estimates of the temperature on these planets are -195°C for Uranus and -201°C for Neptune.

Why is Venus the hottest planet?

Venus has a thick atmosphere filled with carbon dioxide (a greenhouse gas). Sulphuric acid makes up the clouds on the planet. The planet absorbs very less sunlight because of the density of its atmosphere. Whatever sunlight makes its way to the surface bounces as infrared radiation.

On our planet, these radiations go back into space after reflecting. However, on Venus, they are trapped due to the thick layer in the planet’s surroundings. This atmosphere is ideal for trapping heat, creating a furnace-like environment. The temperature on Venus is so high that the metal lead would melt.

Did you know that a day on Venus is longer than its year?

Venus takes longer to rotate on the axis than to revolve around the Sun once! Earth can rotate 243 times on its axis while Venus completes one rotation. This is the longest rotation done by any planet in our solar system.

The second brightest celestial object in the night sky is Venus. Of course, first being our dearest Moon.

The dense clouds around Venus made up of sulphuric acid make the planet reflective. Due to this phenomenon, the body is sometimes shiny and visible during the day!

The atmosphere on Venus spins faster than the planet itself!

The planet itself might take 243 days to rotate on its axis, but the atmosphere around it goes quickly to complete a round in just 4 days. This has been termed super-rotation. It might be because of the thermal tides brought about by the Sun, but the reason is not confirmed.

Found this article insightful? Reach out to us here and share your thoughts! Let us know what more you would like us to write!

Liked his blog? Read more: How to become an astronaut | Everything you need to know

Q1. Is life on Venus possible?

Ans- Even though a lot of astrobiologists have taken a keen interest in this question, no confirmed conclusion has been made in this regard.

Q2. How many moons does Venus have?

Ans- Venus has no moons at all.

Q3. When was Venus discovered?

Ans- The great Galileo was the first person to make a note of Venus in October 1610.

Admin iSchoolConnect
Study Abroad Expert
`
Famous world leaders who can inspire you 8 best books for beginners | Enter a new realm with each book.