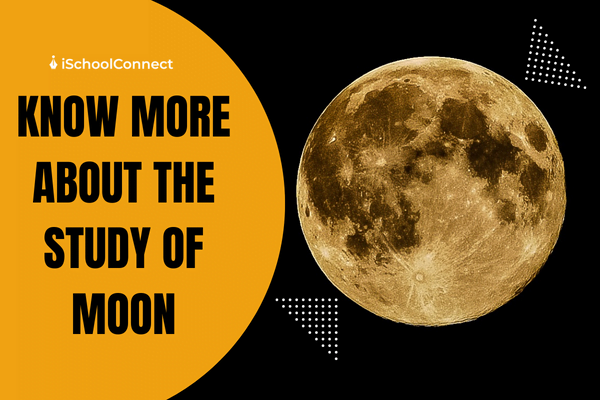 Study of the Moon | Here’s everything you need to know

Centuries of observation and scientific discovery have focused on the Moon’s nature and origin. The study of the Moon will pique your interest in exploring the heavenly body.

People worldwide have found ways to create customs with the Moon. The Chinese tell the story of Chang’e, a Moon goddess. Another tale involves the Moon god Khonsu, a protector of nighttime travellers among the Ancient Egyptians. Also, the ancient Greeks worshipped the Moon goddess Selene, who was said to ride a Moon chariot across the dark sky. The tales are never-ending. Let’s learn more about the crescent through the study of the Moon.

The first attempts at lunar exploration were made during the cold war when the United States and the Soviet Union sent crewless spacecraft to orbit and land on the Moon.

In January 1959, Luna 1, a small Soviet sphere brimming with antennas, became the first spacecraft to escape Earth’s gravity and eventually fly within about 4,000 miles of the Moon’s surface.

Later that year, when Luna 2 crashed in the Mare Imbrium basin near the Aristides, Archimedes, and Autolycus craters, it became the first spacecraft to contact the Moon’s surface. That same year, a third Luna mission managed to capture the first, blurry images of the Moon’s far side, where the sturdy highland terrain differs markedly from the smoother basins on the side closest to Earth.

The United States then entered the fray with nine NASA Ranger spacecraft launched between 1961 and 1965, providing scientists with the first close-up views of the Moon’s surface.

Humans on the Moon

At the time, NASA was racing to fulfill a presidential promise. President John F. Kennedy pledged in 1961 that the United States would land a person on the Moon before the decade’s end. The Apollo program, by far the most expensive spaceflight venture in history, began that year and lasted until 1972, when nine missions and 24 astronauts orbited or landed on the Moon.

The most famous Apollo 11 was the first time humans set foot on another planet. Neil Armstrong and Edwin ‘Buzz’ Aldrin landed in the Sea of Tranquility in the lunar lander Eagle on July 20, 1969. At the same time, astronaut Michael Collins orbited the Moon in the command module Columbia.

“That’s one small step for a man, one giant leap for mankind,” said Armstrong as he pressed the first bootprints into the Moon’s surface.

Why do we study the Moon?

Our Moon is known as ‘Selene’ in Greek, after the Moon goddess of Greek mythology. The term ‘selenology,’ which refers to studying the Moon’s geology, is derived from it.

The Moon is a geological time capsule due to its lack of air and plate tectonics. The surface has scars from the meteorites, lava flows, and the late heavy bombardment, a four billion-year-old event in which asteroids and comets bombarded the inner solar system.

We know that life arose on Earth shortly after that, with asteroids and comets possibly bringing water and organics to the planet. Understanding what happened during this period of Solar System history requires studying the still-intact craters and features on the Moon from that time, making it a critical piece of our origin story.

Furthermore, scientists use the Moon as a reference to determine how old or young other features on planets such as Mars, Mercury, and Moons throughout the solar system are. Unlike Earth and Venus, the Moon has no tectonic activity, so its internal structure has been well conserved since its formation. It allows scientists to learn more about how planets’ interiors form.

Because of its proximity to Earth, the Moon is a natural focus for many space exploration ambitions, including NASA’s Artemis program, which aims to land humans on the South Pole by 2025. It’s also an essential step toward comprehending how space radiation and micrometeorite bombardment can affect astronauts living in deep space for extended periods, such as on Mars missions.

How do we study the Moon?

We could only study the Moon with telescopes and, beginning in the 1940s, radar until the invention of spaceflight. During the 1960s Space Race between the United States and the Soviet Union, dozens of robotic spacecraft were launched to fly by, orbit, and land on the Moon. In 1969, Neil Armstrong and Buzz Aldrin became the first humans to walk on the Moon as part of NASA’s Apollo program.

Bringing back lunar samples is one of the best ways to piece together the Moon’s complex history. The instruments needed to accurately determine the age of Moon rocks are still too large and power-hungry to utilize on a spacecraft.

The Apollo and Luna missions’ samples returned to Earth taught us a lot about the Moon’s history. They did; however, all come from the Moon’s near side, where spacecraft can directly communicate with Earth, near the Moon’s equator, and where the terrain allowed for safe landings. The scientists need samples from new locations to continue piecing together the Moon’s complex history.

China’s Chang’e-5 spacecraft made a lunar landing in a new uncharted region in late 2020. It gathered approximately 1.7 kilograms of samples and returned them to Earth. A sample return mission to the South Pole Aitken-Basin is a top priority. Scientists know this basin, formed by a massive impact on the Moon’s far side, is the Moon’s oldest, but they don’t know the age yet.

Water ice on the Moon’s poles is another area of interest for lunar scientists. How did it get there, and how does it relate to Earth’s water? The ice is being mapped and measured by India’s Chandrayaan-2 orbiter, launched in 2019. NASA intends to launch the VIPER rover to the Moon in 2023, where it will study the ice up close in the Moon’s permanently shadowed regions. VIPER is a component of NASA’s Commercial Lunar Payload Services (CLPS) program, which will begin landing missions regularly in 2022.

What is the connection between Earth and the Moon?

In the vastness of our solar system, there is one place that we know better than parts of Earth. Our natural satellite, the Moon, is a spinning rock that has been a constant in our lives. So, here are a few things we’ve discovered about Earth from studying our nearest neighbor.

The composition of a newborn Earth

The cheese does not make up the Moon; it is composed of the remains of baby Earth!

Scientists believe that 4.5 billion years ago, a Mars-sized object collided with Earth. The impact was so powerful that materials from the Earth and the entity that struck it flew into space. Some of this debris merged to form the Moon.

Not only was the Moon mostly made of Earth, but a lot of Earth debris most likely landed on the Moon after it formed.

Earth’s time capsule on the Moon

The Moon preserves almost every crater on its surface. Earth’s surface, which is constantly churned and reshaped by plate tectonics, erosion, and other elements, cannot say the same. However, because the Moon is so close to Earth, we can look to the stable lunar surface to learn about Earth’s past.

The majority of Moon craters are said to have formed approximately four billion years ago, during a period known as the Late Heavy Bombardment. We believe many asteroids and other objects bombarded the Moon, our planet, and other planets during this time. By studying lunar craters and rocks brought back by Apollo astronauts decades ago, we have a better picture of what happened to Earth during that turbulent period.

The Moon helps with the existence of life on Earth

It is responsible for our way of life!

Furthermore, the Moon keeps the Earth’s signature 23.5-degree tilt on its axis in check. The 23.5-degree angle ensures that our planet is safe to live on, as a more prominent tilt would result in more extreme seasons.

Without the Moon’s gravity, the Earth’s axis would wobble more violently, drastically altering the climate. Aside from ensuring climate stability, the Moon also establishes the Earth’s rhythm, the highs and lows of the tides, which influence how we use the ocean for food, travel, and recreation. Measuring the Moon’s mass, size, and orbital properties is critical for predicting tides and seasons.

Did you find this blog informative? If so, please share your thoughts in the comments below. Click here to contact us for more information on the study of the Moon. We would be happy to assist you with your queries.

Liked this blog? Read next: Difference between aerospace engineering and aviation

Q1. What is the study of the sun called?

Answer- Heliophysics is the science of studying the sun and its effects on the rest of the solar system.

Q2. What comprises the stars?

Answer- Stars are massive celestial bodies composed primarily of hydrogen and helium that generate light and heat from the churning nuclear forges inside their cores. Aside from our sun, the light dots we see in the sky are all light-years away from Earth.

Q3. The Moon is made of what components?

Admin iSchoolConnect
Study Abroad Expert
`
Study of kidney- a guide to nephrology Study of rocks their types, applications, and much more.