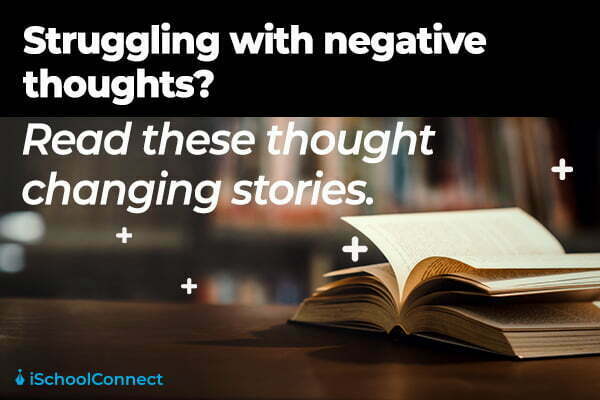 Do certain incidents just drain the energy out of you? In their daily lives, every individual comes across several such incidents that might drain their motivation and energy, making them feel like giving up. This article will find some stories that will help you go through a little bit of mindfulness and allow you to change your thoughts for good.

There are times when a person goes through a trail of traumatic incidents. That’s when a person goes through a lot of demotivation and discouragement. It harms their productivity and mental health. Therefore, these are the times when one should read some stories that would change their thinking processes. Here are 5 thought-changing stories that will make you feel more positive!

Once upon a time, some people came to a wise guy cribbing about the same problems repeatedly. One day, he decided to tell them a joke, and they all burst out laughing.

After a few minutes, he told them the same joke, and only a handful of them grinned. Then he delivered the joke a third time, but no one laughed or smiled this time.

‘You can’t laugh at the same joke over and over,’ the wise guy added with a smile. ‘So why do you keep crying about the same thing?’

2. You won’t get anywhere if you’re lazy

Once, in ancient times, a king ordered his men to place a boulder across a highway. He then crept into the woods and waited for someone to push the boulder out of the way.

Some of the king’s wealthiest merchants and courtiers simply walked around it. Many people condemned the king for not keeping the roads clear, but no one took action to remove the stone.

One day, a peasant carrying vegetables passed by. When the peasant arrived at the boulder, he dropped his load and attempted to push the stone out of the way. After much pushing and straining, he finally succeeded.

When the peasant went back to get his groceries, he found a pocketbook in the path where the boulder had been.
He found many gold coins in the purse, with a note from the King explaining that the reward was for the person who removed the boulder from the path.

3. Don’t let a single setback hold you back in the future

A person came to a halt as he passed the elephants, perplexed by the fact that these gigantic beasts were being confined only by a small rope attached to their front leg. There aren’t any shackles or cages here. The elephants might easily break free from their chains at any time, but they chose not to do so for whatever reason.

When he saw a trainer approaching, he wondered why the creatures were just standing there, not moving. ‘Well, when they’re very young and much smaller, we use the same size rope to tie them, and it’s enough to hold them at that age,’ the trainer added. They’ve been socialized to believe that they’ll never be able to free themselves. Since they believe the rope can still hold them, they never try to break free.’

The man was taken aback. These creatures could break free at any time, but they didn’t as they didn’t believe they could.”

Read: 5 motivational success stories of women you need to read

4. You will become stronger as a result of your struggles

Once upon a time, a man discovered a butterfly in the process of hatching from its cocoon. He stayed for hours, watching the butterfly struggle to get its wings through a tiny hole. Then, suddenly, it stopped moving and appeared to be trapped.

As a result, the man decided to assist the butterfly in escaping. He chopped off the last portion of the cocoon with a pair of scissors. Even though it had a bloated body and short, shriveled wings, the butterfly emerged effortlessly. The man was unconcerned, and he sat there waiting for the butterfly’s wings to grow large enough to support it.

That, however, never happened. The butterfly scurried around with tiny wings and a distended body for the rest of its life, unable to fly.

Despite the man’s good intentions, he didn’t realize that the confining cocoon and the butterfly’s effort to get through the tiny hole were God’s way of driving fluid from the butterfly’s body into its wings to prepare it for flight once it was free.

Once upon a time, there was a young boy with a bad temper. His father decided to give him a bag of nails and told him he had to hammer a nail into the fence every time he lost his temper.

Finally, the day arrived when the boy did not lose his cool. When he told his father, he recommended that the youngster should now pull out a nail every day he kept his cool.

After a few days, the small child finally informed his father that all of the nails had vanished. The father walked his son to the fence, taking his hand in his. ‘You did well, my son, but have a look at the fence holes. On the other side of the fence, nothing will ever be the same. When you scream something out of frustration, it leaves scars like these.’

A knife can be entered and dragged out of a man. It doesn’t matter how many times you apologize; the wound will never heal.

Every individual needs a push to move forward in life. Coming across such thought-changing stories pushes them into working harder and doing some mindful thinking. It makes a huge difference, as when we listen to such stories, we become thoughtful about what we can take from these stories to make our lives better. For more such thought-changing stories and motivation, reach out to us!

Q1. What can I do to change my thoughts?

Answer – The nature of thoughts depends on your perception of things, whether you’re a ‘glass half full’ person or a ‘glass have empty’ person. Changing your thoughts can be done through positive affirmations, learning to let go of things, and counting your blessings. Nevertheless, letting yourself live life the way you wish to, is the best way to change your thoughts.

Q2. How can I change my life story?

Answer – Changing your life story requires a lot of dedication and hard work. In order to do so, an essential part is being open to change. Regardless of how you feel, change is the only constant in our lives. It would be best to focus on the bigger picture but more on the little things. The little things in life take up the most significant places in our lives and make us who we are today. Learn to accept things in life and change what you can’t accept. A few strategies to change your life story will go a long way.

Q3. How can I motivate myself?

Answer – The best way to motivate yourself is to believe in yourself. You can achieve anything in life if you believe you can do it. In addition, discipline will drive you to self-motivate and give you the little nudge you need to get going.