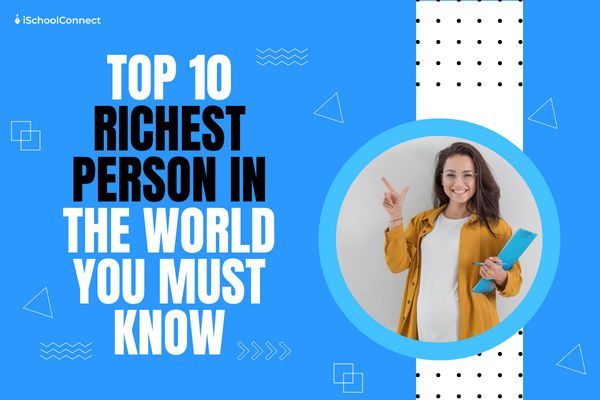 Top 10 richest persons in the world

Billionaires have a disproportionate amount of wealth, giving them the ability to shape the world around us, from the economy to politics to our media and much more. Let’s look at the top ten richest people in the world.

Billionaires wield enormous power in the global economy, politics, and philanthropy. The richest of them belong to an even more elite club and wield considerably more power. A significant percentage of the riches of several of these billionaires are still invested in the tech conglomerates they founded. According to Forbes, there are 2,668 billionaires today, but who are the top 10 richest persons in the world? Let’s find out

Elon Musk attended a university in Canada before deciding to attend the University of Pennsylvania to study economics and physics. Two days later, Musk left his graduate physics course at Stanford University to start Zip2, one of the first internet directions services. He used a portion of the proceeds from this startup to launch X.com, an online payment system purchased by eBay and later renamed PayPal Holdings. In 2004, Musk became a big investor in Tesla Motors (now Tesla), which helped him advance to his present role as CEO of the electric vehicle firm. Musk is the founder and CEO of the space launch rocket business Space Exploration Technologies (SpaceX).

In 1994, shortly after leaving the hedge fund titan D.E. Shaw, Jeff Bezos founded Amazon.com in a Seattle garage. Though it began by selling books, Amazon has since evolved into a one-stop shop for everything, and it is expected to overtake Walmart as the world’s largest retailer by 2024. Bezos owned up to 16% of Amazon in 2019 before transferring 4% to his ex-wife Mackenzie Scott as part of their divorce settlement. On July 5, 2021, Bezos will step down as CEO of Amazon to become executive chairman.

Bernard Arnault serves as chairman and CEO of LVMH, the largest producer of luxury goods in the world. Louis Vuitton, Hennessey, Marc Jacobs, and Sephora are among the LVMH labels. Most of Arnault’s wealth is derived from his massive stake in Christian Dior SE, the holding company that owns 41.2% of LVMH. His family-owned holding company, Groupe Familial Arnault, owns a 6.2% stake in Christian Dior SE and a 6.2% stake in LVMH.

Gautam Adani is an Indian entrepreneur and businessman born on June 24, 1962, in Ahmedabad, Gujarat, India. He is a well-known personality in India, and millions of young people recognize him as an entrepreneur. Gautam Adani is the founder, chairman, and president of the Adani Group and the Adani Foundation. The largest port manager, producer of thermal coal, and coal trader in India right now is Adani.

William Henry Gates III, better known as Bill Gates around the world, was born on October 28, 1955, in Seattle, Washington, USA. He established the Bill and Melinda Gates Foundation and Microsoft.

In 1962, he purchased his first shares in the textile company Berkshire Hathaway; by 1965, he had gained control of the majority of the corporation. In 1967, Buffett increased the company’s holdings with new ventures such as insurance. Currently, Berkshire Hathaway has a $705 billion market capitalization.

Co-founder and Board Member: Alphabet

In 1995, Larry Page and his friend Sergey Brin came up with the concept to enhance internet data extraction while they were both students at Stanford University. The duo developed Backrub, a new search engine technology that gets its name from its capacity to assess links to a page. In 1998, Page and Brin co-founded Google. Page led the company as CEO from 2011 to 2019 and again from 2001 to 2001.

The business bought YouTube in 2006. Google acquired Android in 2005, and in 2008 the Android mobile operating system was made available. In 2015, Google underwent a reorganization and became a division of holding company Alphabet.

Co-founder and Board Member: Alphabet

Steven Anthony Ballmer, the former CEO of Microsoft, was born on March 24, 1956, in Detroit, Michigan, United States of America.

Mukesh Ambani serves as chairman and CEO of Reliance Industries, the largest oil refiner in the world and one of the most valuable companies in the world.

Dhirubhai Ambani, Ambani’s father, began the conglomerate in 1966 as a textiles business. It is now one of India’s top economic sectors. Oil and gas, petrochemicals, refining, retail, and media are among Reliance’s business ventures.

Liked this blog? Read next: Don’t miss the list of the top 10 richest countries in the world

Q1. Which country will have the most billionaires?

Ans – The United States has the most billionaires, with 724 in total.

Q2. Who was the first billionaire?

Q3. Who is the world’s youngest billionaire?

Ans – Alexandr Wang was a math whiz as a kid who enjoyed competing in national math and coding competitions.