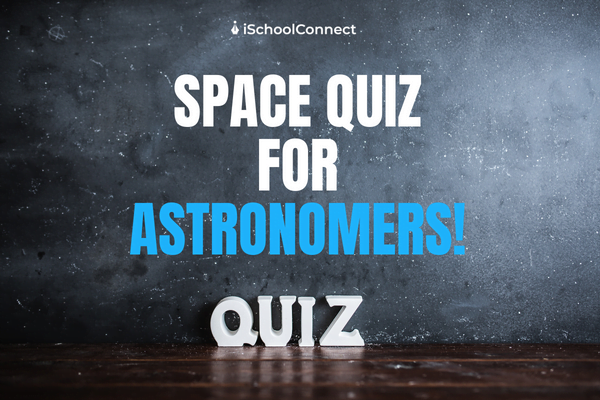 Top 12 space quiz questions you need to check out

The Universe is enormous. Radiation (such as light and heat), magnetic fields, and high-energy particles are also present in space. Let’s test your knowledge about the Universe through these space quiz questions.

The solar system broadens from the Sun, known as Sol by the ancient Romans, through the asteroid belt to the four gas giants, on to the disk-shaped Kuiper Belt, and beyond to the teardrop-shaped heliopause. There is much we know about space and the solar system, and there is still more to explore. Take these space quiz questions and test your knowledge about the solar system and the Universe.

How old is our solar system?

A giant cloud of dust and gas, known as the solar nebula, crumbled in on itself about 4.6 billion years ago, forming what would eventually become the solar system’s Sun and planets.

Meteorites, or space rock fragments that have fallen to Earth, have assisted scientists in determining the age of the solar system. Some of these small fragments have broken off of moons or planets and can provide valuable scientific data about the chemistry and history of their home body.

Which are the planets that make up the solar system?

Here is a short description of every planet that consists of the solar system before we head on to the space quiz questions. A little brush-up can help you get the answers right.

Mercury is the planet closest to the Sun. It is also the smallest planet in the solar system, measuring only about 3,032 miles (4,879 kilometers) in diameter and having no moons of its own.

Venus, named after the Roman goddess of love, is the second planet from the Sun and the hottest planet in the solar system. Its atmosphere is a thick layer of mostly carbon dioxide gas that traps heat, allowing the planet’s surface temperatures to reach a blistering 880 F (471 C). Astronomers announced the discovery of phosphine in Venus’s atmosphere in 2020.

Earth, the third planet from the Sun, is the only planet in the Universe known to support life. The presence of liquid water determines its habitability. The Earth orbits in the so-called Goldilocks zone, which means it is at the optimal distance from the Sun for liquid water to exist; any closer, the water would evaporate into a gas, and any farther away, the water would freeze.

Mars is known as the Red Planet because of the iron-rich dust covering its surface and making it rusty. Because of this red hue, the ancient Romans named Mars after their god of war.

Jupiter is the solar system’s largest planet. Jupiter is a gas giant composed primarily of helium and hydrogen, unlike the inner planets. Jupiter derives its name from the Roman gods’ king (also known as Zeus in the Greek pantheon).

According to NASA, Jupiter, the fifth planet from the Sun, is twice as large as all of the other planets in the solar system combined, but it also has the shortest day of any planet, taking 10 hours to rotate around its axis.

Saturn, the sixth planet from the Sun, is the solar system’s second-largest planet. Saturn’s most notable feature is its prominent rings. Saturn, like Jupiter, is a gas giant made up of helium and hydrogen, and it is the least dense of the planets.

Uranus, the seventh planet from the Sun, was discovered using a telescope in 1781 by British astronomer William Herschel. The ice giant is heavier in composition than its gas giant neighbors, consisting of water, methane, and ammonia ice.

The eighth planet from the Sun, Neptune, was discovered in 1846. However, even before the planet’s discovery, scientists predicted its existence due to its effect on Uranus’ orbit.

Below are the space quiz questions. Try your best to answer the questions right.

1. Which planet has the largest Asteroid belt?

2. Which mission of NASA brought the first human to the moon?

3. Which is the smallest planet in the solar system?

4. Recently, there was a discovery of which planet?

5. What was the first manned mission of NASA?

6. Which planet is farthest from Neptune?

7. Which planet do the moons Oberon and Titania belong to?

9. What are comets mostly made of?

10. Are there any other planets in our solar system except Earth that we can live on?

11.  When did  NASA launch its first mission to the Sun?

12. Which planet is known as the diamond planet?

Did you find this blog informative? If so, please share your thoughts in the comments below. Click here to contact us for more information on the space quiz. We would be happy to assist you with your queries.

Liked this blog? Read next: Top 5 German Universities for M.S. in Aerospace Engineering.

Q1. Which planet is rich in gold?

Answer- At current market prices, 16 Psyche contains enough gold and other valuable metals to be worth approximately $700 quintillion, which is enough to provide each and every human being on the planet with a private fortune of nearly a hundred billion dollars.

Q2. Which planet is the pink planet?

Answer- The planet, GJ 504b, is made of pink gas. It resembles Jupiter, a significant gas planet in our solar system. However, GJ 504b is four times more massive.

Answer- NASA is now preparing for a bold and innovative human spaceflight and discovery era. The agency is developing the Space Launch System rocket and the Orion spacecraft for human deep space exploration.