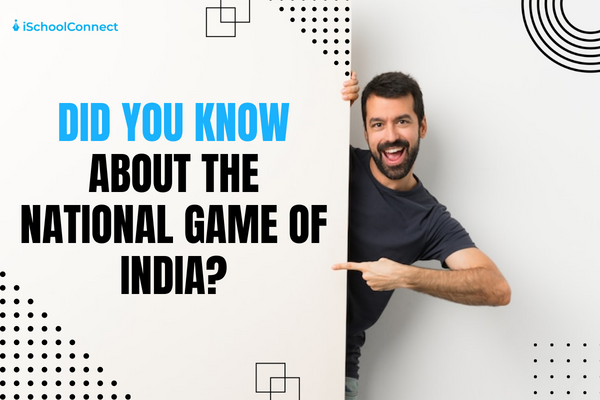 What is the national game of India? Hockey, kabaddi, or cricket

Sports and games are not only fascinating topics and enjoyable pastimes that promote good health but also nationwide and international concerns. Keep reading to learn what is the national game of India.

Sports participation will help everyone maintain a healthy heart because it improves cardiovascular endurance. Being on a sports team also helps children with social interactions, teamwork, and leadership. Teamwork necessitates collaboration and compromise. Amid all the talk about the importance of playing sports, do you know what is the national game of India? Well, if you don’t, read on to find out.

What is the national game of India?

Every country has a national sport. Hockey was considered India’s national sport for a long time. However, this is not the case. Is it kabaddi or cricket? Wrestling, boxing, or tennis? None of the above is correct. India’s government or law has not declared any of it a national sport.

While India has many national symbols, such as a national animal, bird, flower, and fruit, the country does not have any game known as ‘Bharat ka Rashtriya Khel.’

Many people wonder if cricket should be India’s national sport, but the government is yet to recognize the national game.

Why did Indians believe hockey to be the national game of India?

For many years, we were under the impression that hockey was India’s national sport. Understanding why most Indians saw hockey as their national sport is critical. Hockey is one of the oldest sports, having been legalized in 1925. The Indian Hockey Federation sanctioned the sport. India has consistently been one of the best teams in the world in this sport.

The Indian team has performed admirably in almost every field hockey event, including the Olympics, World Cups, and other tournaments. India’s men’s and women’s hockey teams have shown the rest of the world the country’s sporting prowess. People believed that hockey was ‘Bharat ka Rashtriya Khel’ because of its success rate and popularity.

Achievements of the Indian hockey team during the Olympics

As previously stated, India’s hockey team has accomplished so much that the game is considered the ‘Bharat ka Rashtriya Khel’ by the people. This section details the Indian hockey team’s Olympic achievements over the years. In this sport, the team has won 12 medals and has performed admirably in previous years.

Why are cricket and kabaddi not the national game of India?

Cricket only gained popularity in India after hockey had already established itself. In 1983, our country’s team won its first World Cup, bringing this sport to prominence. Cricket has become a household name due to its well-known players and current success rates. Kabaddi is another sport in which India has performed extraordinarily.

Kabaddi is extremely popular in several northern states, and its athletes have excelled in numerous sporting competitions. Cricket and kabaddi are not the national sports in India because they are not easily accessible throughout the country.

Why does India not have a national game?

A school teacher from Maharashtra’s Dhule district filed a Right to Information (RTI) request with the government in 2020, asking when did the country designate hockey as India’s national sport.

“The government has not declared any sport/game as the national game of the country,” the ministry of youth affairs and sports responded. “The government’s objective is to encourage/promote all popular sports disciplines.”

However, following India’s outstanding performance at the Tokyo Olympics 2021, calls to make hockey the national sport have grown louder.

What is the importance of having a national sport?

Why is it difficult to declare a national game in India?

India is a large country with the second-largest population in the world. While the country’s diversity is one of its most appealing features, choosing a national sport can be difficult. It is challenging to select a national sport or game because there are numerous factors to consider and multiple games. Sports are played at various levels throughout the country.

India has 28 states and 8 union territories, making it a demographically diverse country. Cricket is a popular sport in Tamil Nadu and Maharashtra. Football is solid in the seven sisters of the North East, West Bengal, and Goa. Northern states excel in wrestling, hockey, and kabaddi. Many other games are popular in different parts of the country, which is why defining the national game of India is challenging.

Did you find this blog informative? If so, do express your thoughts in the comments below. Click here to contact us for more information on what is the national game of India. We would be happy to assist you with your queries.

Q1. What is the national game of the USA?

Answer- Baseball is the national sport of the United States. Baseball is a bat-and-ball sport where two opposing teams take turns batting and fielding.

Q2. What is the national sport of India and Pakistan?

Q3. Cricket is the national sport of which country?

Answer- Cricket is the national sport of England.

Admin iSchoolConnect
Study Abroad Expert
`
What is a barter system? | Definition, benefits, and limits Who is the father of history?