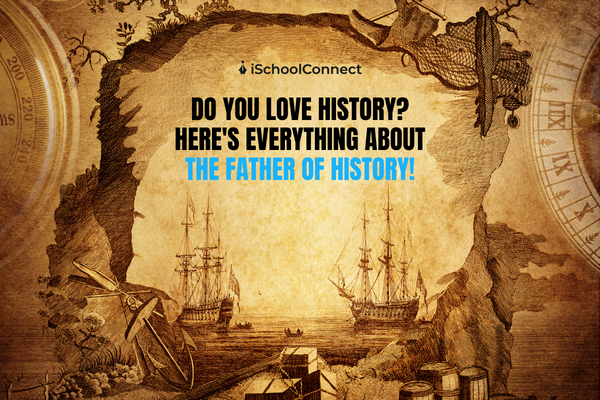 Who is the father of history?

History can include a war between Gods, nations, or humans. It can make us wonder who is the father of history. Keep reading to learn more about him and his notable work.

Studying history helps us analyze how events in the past shaped the world we live in today. Lessons from the past teach us about ourselves, how we came to be, and how to avoid mistakes and forge better paths for our societies. Read on to know who is the father of history and what his contributions are to the community.

Who is the father of history?

Herodotus (c. 484 – 425/413 BCE) was a Greek writer who founded the discipline of history. He was named ‘The Father of History’ by the Roman writer and orator Cicero for his famous work The Histories. He has also been called ‘The Father of Lies’ by critics who claim these ‘histories’ are little more than tall tales.

While Herodotus occasionally relays inaccurate information or amplifies it for dramatic effect, his accounts have consistently been found to be more or less reliable. Later archaeological evidence has refuted early criticism of his work, proving that his most frequently criticized claims were, in fact, accurate or, at the very least, based on accepted information at the time.

Most historians still regard Herodotus as the father of history and a trustworthy source of information about the ancient world.

Criticism of Herodotus’ work appears to have begun among Athenians. They objected to his account of the Battle of Marathon (490 BCE), specifically which families deserved the most credit for the victory over the Persians. More severe criticism of his work concerns the integrity of his travel accounts.

One example is his claim about fox-sized ants in Persia spreading gold dust while digging their mounds. For centuries, they rejected it until, in 1984 CE, the French author and explorer Michel Peissel confirmed that a fox-sized marmot in the Himalayas did indeed spread gold dust when digging and that accounts demonstrate the animal had done so in ancient times as the villagers had a long history of gathering this dust.

Peissel also explains that the Persian word for ‘mountain ant’ was very close to their word for ‘marmot.’ Later it came to their notice that Herodotus was not inventing his giant ants, but because he did not speak Persian and had to rely on translators, he was a victim of a misunderstanding due to translations.

Read more: History | Incredible facts about the subject you must learn!

While we know little about his life, it appears certain that he was born into a wealthy, aristocratic family in Asia Minor that could afford to pay for his education. His writing ability results from a thorough education in the best schools of his day. He read and wrote in Ionian Greek. His apparent ability to travel at will also points to a man of means. Many assume he served in the army as a Hoplite because his battle representations are precise and always told from the perspective of a foot soldier.

Why is Herodotus known as the father of history?

Here are a few reasons why Herodotus is known as ‘The Father of History.’

1. He invented the entire concept of history

Herodotus was the first of his generation to compile real history into a single long, chronological sequence. He traveled far and wide to gather firsthand knowledge from civilizations all over the world, collecting his findings in the Histories, a massive nine-volume series spanning continents and lives. No one had ever attempted such a daring task before Herodotus. Also, texts from ancient Greece tend to concentrate on mythological stories, a cautiously woven blend of fact, fantasy, and fiction, full of extravagant tales of gods and mythical creatures.

Herodotus documented some of history’s most significant events in his epic 9-volume series of books, the Histories. He primarily studied the Greco-Persian wars, including their background, the battles themselves, the Persian invasion of Greece, and the Greek victories at Salamis, Plataea, and Mycale. He then described the rise of the Persian Empire, delving into its history, geography, and culture in great detail.

3. Historians believe his stories are true

Although some skeptics questioned Herodotus’ versions of events at the time, accusing him of blatantly lying and passing them off as historical facts. Modern historians have shown that much of Herodotus’ Histories is likely valid. At times, he was as close to the truth as in ancient times, when knowledge of the world was far more limited (even if he did embellish a little here and there). All of this demonstrates how thoroughly he researched the lives and stories of the past, proving that he is the true father of history.

4. He traveled widely for research

Herodotus was born in Halicarnassus, a Greek city in Southwest Asia under Persian rule, and later moved to Athens before settling in Thurii, a Southern Italian colony. He then spent many years traveling worldwide, visiting Egypt, Libya, Syria, Babylonia, Susa, Lydia, Susa, and Phrygia. He then traveled through Byzantium, Thrace, and Macedonia before arriving in Scythia along the Black Sea coast. If anyone was qualified to write about world history, it was this man who had witnessed so much of it.

After traveling the world of his time, Herodotus settled in the Greek colony of Thurii, where he later edited and revised the Histories. He had previously lived in Athens, and people believe he returned at a certain point. Scholars believe he died in Athens between 425 and 413 BCE of the same plague that killed Athenian statesman Pericles (l. 495-429 BCE).

He was so famous that many cities (including Athens and Thurii) claimed to be the location of his funeral and grave and erected monuments in his honor.

Did you find this blog informative? If so, do express your thoughts in the comments below. Click here to contact us for more information on who is the father of history. We would be happy to assist you with your queries.

Likes this blog? Read next: The history of the English languages

Q1. Who is the mother of history?

Answer- Abigail, Josephine, Adams, and Anna are known as mothers of modern history.

Q2. Who is the father of modern Indian history?

Answer- Because of the significant changes he instituted in 18th and 19th century India, Raja Ram Mohan Roy is known as the ‘Father of the Modern Indian Renaissance.’ Removing the brutal and barbaric Sati Pratha was the most visible of his actions.

Q3. Who is the father of English history?

Answer- Bede was a monk who was a scholar and author. He is known as ‘the father of English history.’ Bede was sent to a monastery in Jarrow for education at a young age.